Preschools With No Walls 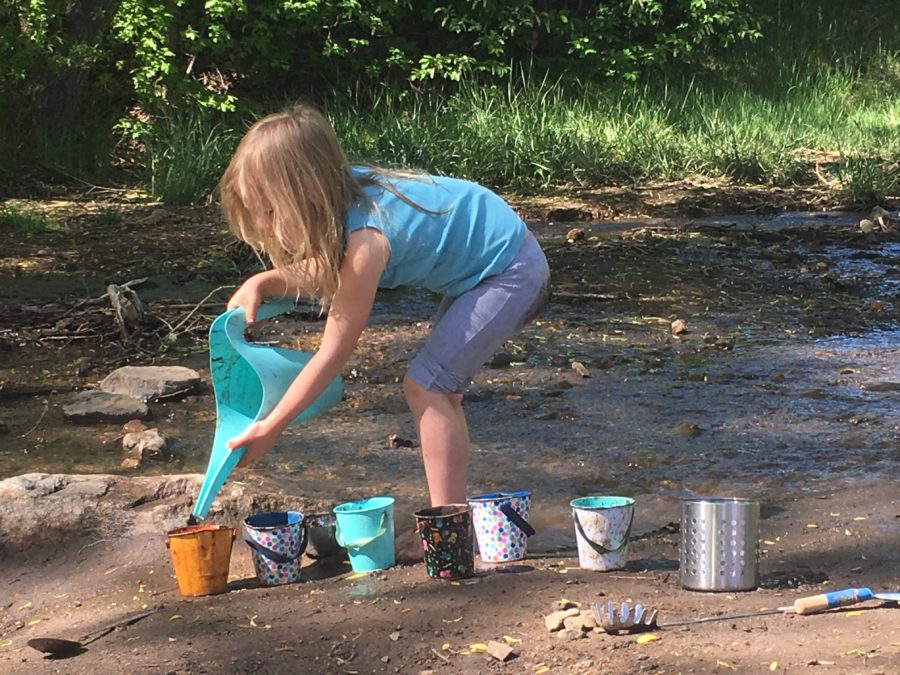 A 2½-year-old boy named Ben was ankle-deep in a Jefferson County creek when suddenly he lost his footing and plopped onto his bottom in the cold shallow water. The fall didn’t faze him. Neither did his dripping shorts. He got up and kept playing.

About a dozen children frolicked in or near the creek that day — making pretend tea in small metal buckets, building dams with sticks and mud, or inspecting bugs that flitted nearby.

It was a typical day at Worldmind Nature Immersion School, one of a growing number of programs where toddlers, preschoolers, and kindergarteners spend all their time outside — no matter the weather.

“When children look like they’re playing in nature, huge amounts of learning is taking place,” said Erin Kenny, founder of the American Forest Kindergarten Association and the co-founder of a pioneering outdoor preschool program in Washington state.

Established first in Scandinavia, such “forest schools” occupy a steadily expanding niche in the American early-childhood landscape. But even with the movement’s popularity, advocates wonder if it can reach beyond the homogenous slice of families — mostly middle-class and white — it now serves.

Parents say their kids like the expansive space, non-stop play, and dearth of rules in outdoor classes. And as long as they’re dressed for the conditions, they take rain, snow, or frigid temperatures in stride.

“I think it’s great to come in bad weather,” said Denver parent Tracy Larson, who has two children in the Worldmind class. “It makes us go outside when we’re at home in bad weather too … You’re not afraid of it.”

Forest schools nationwide face significant regulatory and logistical barriers to expanding their footprint — and serving students of color and those from low-income families.

“This movement is not going to move forward or it’s going to be stigmatized if we don’t rapidly move the needle from white middle-class to all-inclusive,” said Kenny.

Perhaps the most immediate problem is that states have no rules for outdoor-based programs that serve young children and thus, no way to grant them child care licenses. Besides signaling that programs meet basic health and safety rules, a license opens the door to state subsidies that help low-income families pay for child care.

In Colorado, the inability to get licensed means that forest schools can only have up to four young children in a class or, as is the case at Worldmind, must require parents to stay for each session. But licensing rules here could soon change. The same is true in Washington state, where there are dozens of outdoor preschool programs.

Government officials in both states are working with outdoor preschool providers as part of pilot programs that could lead to creating a child care license for outdoor preschools. The idea is to ensure children’s safety without stamping out the creek-wading, tree-climbing sensibilities that make the programs what they are.[promo]

Kenny said there are now around 50 forest preschools in the U.S. and another 200 “nature schools,” which put a major emphasis on outdoor learning but have buildings, too. Colorado and Washington are the only ones she knows of that are actively exploring special licensing classifications for outdoor preschools, but hopes their pilot programs will build momentum nationally.

“I used to feel I was riding the crest of a wave,” she said. “Now I feel the wave has crashed and it’s moving in ripples everywhere.

In Colorado, two providers — Worldmind and a Denver-based program called The Nursery School — are participating in the state pilot program. It starts this month for the Nursery School and in August for Worldmind. Both providers will be allowed to serve up to 10 children ages 3 to 6 during half-day sessions without parents present. The schools must adhere to a staff-student ratio of 1 to 5 — stricter than what is required in a traditional preschool.

They’ll also have to abide by other rules, including keeping tree-climbing children within arm’s reach and seeking indoor shelter in extreme weather.

In addition, both programs will track heaps of data, ranging from hourly weather changes to the circumstances behind any wildlife encounters or potty accidents. State licensing officials will also visit each program regularly. The pilot will run through February — to capture all kinds of Colorado weather — with a licensing decision possible in the summer of 2019.

The two men first conceived of the school in 2013 during their time in an early childhood leadership program and soon after discovered the long, bureaucracy-laden road to state recognition. There were waiver applications, denials, a hearing before the state attorney general, and even a look at whether state legislation would further the cause of outdoor preschools in Colorado.

“It’s been slow going,” but worthwhile, Hebard said. “It’s going to allow other practitioners to open outdoor preschools … It’s going to give parents another option.”

A child plays in the limbs of a tree at Matthews/Winters Park in Jefferson County.

Megan Patterson, a former elementary school teacher in Alaska and Colorado, launched Worldmind in 2015 — complying with state rules by offering “child and caregiver” classes at local parks and botanical gardens in Boulder County and metro Denver.

“I studied urban ecology in Boston and after that I realized … how important it is to connect kids to places around where they live,” she said. “I finally found the type of education I believe in 100 percent.”

State officials say they have been approached by other outdoor preschool providers interested in the pilot, but don’t plan to expand it beyond the two programs, and the roughly 40 children they’ll serve during the pilot period.

“We feel the model needs to be even more rigorous in the state of Colorado,” said Erin Mewhinney, director of the state’s early care and learning division in the office of early childhood.

“We all love the outdoors, but we all know how dangerous it is and we’re trying to strike a balance with that license type,” she said.

A sense of freedom

The recent Worldmind class where 2-year-old Ben plopped in the creek took place at Matthews/Winters Park in Golden on a warm, sunny May morning. While Patterson offered some general structure to the dozen kids in attendance — a snack break, a brief discussion of a picture book they’d read, and a chance to feel animal pelts, the kids were mostly free to do what they wanted.

Their parents lingered nearby, chatting with each other, chasing after younger siblings, or joining their kids in the creek or on a green tarp laid out nearby. It felt like a big, free-flowing playdate in the woods.

To be sure, there were the usual little-kid frustrations. One small girl, after repeatedly scrambling up the bank of the creek without much trouble, was reduced to tears once her hands went from merely dirty to muddy.

Worldmind’s upcoming pilot program class will look similar to the child and caregiver class, though without the parents. It will take place at Denver’s City Park, with the adjacent Denver Museum of Nature and Science serving as a backup in case of extreme weather.

Several parents who attended the recent class at Matthews/Winters Park said they planned to send their children to the pilot program. They often used the same word to describe why they liked the outdoor classes: Freedom.

Brittany Courville, of Lakewood, said she brought her 5-year-old daughter Siena to her first Worldmind session after the family relocated to Colorado from Texas a few years ago. The move had been jarring for the then 2-year-old, but the outdoor class seemed to restore her spirits.

“She loved it … It was freezing and she didn’t want to leave,” said Courville. “You know, you go to library story times — ‘Sit down. Do this. Do that’ — and she came here and there were other kids she could play with and also be herself and just explore.”

PHOTO: Ann Schimke
Megan Patterson works with children to make a dam in a creek during a recent “forest school” class.

Brit Lease, a Denver resident and the mother of 2-year-old Ben, has friends who are excited that their daughter’s preschool has pledged she’ll be reading on a first-grade level by the time she starts kindergarten. But Lease doesn’t want that for Ben.

While she talked, Ben growled like a tiger and showed off his “sword” — fashioned out of two thin branches bound together with black cord.

“My theory right now is just let them be kids as long as they can because it does start sooner,” Lease said. “Kindergarten is no joke anymore.”

While Patterson launched Worldmind with a primary focus on getting kids outside, she’s lately shifted her goals. The organization is revamping its mission to aim for racial and ethnic, socioeconomic, cultural, and ability diversity.

If Worldmind becomes licensed, she also plans to accept state child-care subsidies. Tuition for four half-days of forest school during the fall semester of the pilot project runs about $2,900.

But like other outdoor preschool providers, Patterson knows the typical part-day forest school schedule doesn’t work for everybody.

In part to accommodate working parents, Patterson hopes by the fall of 2019 to open a brick-and-mortar child care center that would still focus on outdoor learning, while enabling Worldmind to serve infants and toddlers, and offer full-day care for children up to age 6.

Megan Patterson, the founder of Worldmind Nature Immersion School, talks with two children while others play nearby.

Hebard said he doesn’t plan to accept child-care subsidies because they come with requirements he thinks don’t apply to an outdoor preschool model. These include evaluating students using a state-approved assessment tool.

Still, he would eventually like to raise money for a scholarship program. But with only a handful of tuition-paying families enrolled now and much of his extra time spent working nights at UPS Inc., that reality could be a ways off.

“It would be nice to have a broader demographic,” he said. “It’s a good opportunity for any child.”

Nationally, some forest preschools have come up with creative ways to open their doors to a wider slice of their communities. For example, the Forest Freedom School, based in Oakland, gives students of a color a 30 percent break on tuition. It’s billed as the “Struggle Is Real” discount.

Aside from financial obstacles, there can be cultural barriers that make outdoor preschools perplexing or unthinkable for some families. These may include worries that children will get sick if they spend time in the rain and cold or simply the sense that school isn’t an outdoor activity.

Hebard said a colleague at another organization told him about concerns voiced by parents about plans to replace the preschool’s brightly colored plastic play equipment with a nature-themed playground. Some of the parents worked outside all day and were put off by the idea of their children playing in the dirt at school.

Overcoming those perceptions will take parent education and outreach to local groups that work with communities of color, forest school leaders say.

Kenny said programs must be aggressive about serving all kinds of families. And it’s not just tuition help that’s needed, she said. Because children are outside in all kinds of weather, families may need help ensuring their children have access to high-quality clothing and gear.

“It’s incumbent on these schools to offer some kind of assistance because right now the government’s not doing it, nobody’s doing it,” she said.

Originally posted on Chalkbeat by Ann Schimke on June 5, 2018.