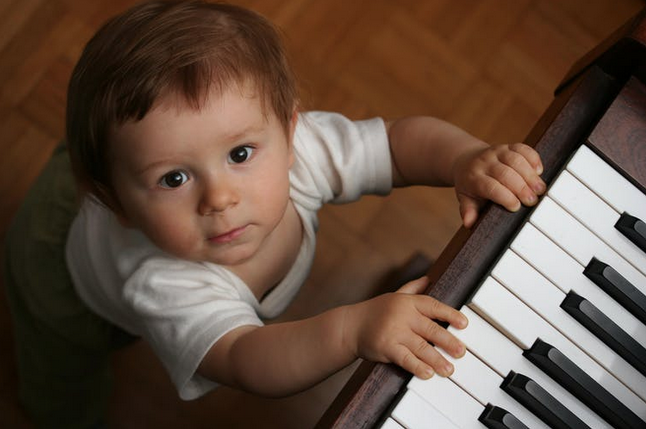 by Christina Zhao, University of Washington

Growing up in China, I started playing piano when I was nine years old and learning English when I was 12. Later, when I was a college student, it struck me how similar language and music are to each other.

Language and music both require rhythm; otherwise they don’t make any sense. They’re also both built from smaller units – syllables and musical beats. And the process of mastering them is remarkably similar, including precise movements, repetitive practice and focused attention. I also noticed that my musician peers were particularly good at learning new languages.

All of this made me wonder if music shapes how the brain perceives sounds other than musical notes. And if so, could learning music help us learn languages?

Music training early in life (before the age of seven) can have a wide range of benefits beyond musical ability.

But what about babies who aren’t talking yet? Can music training this early give babies a boost in the steps it takes to learn language?

The first year of life is the best time in the lifespan to learn speech sounds; yet no studies have looked at whether musical experience during infancy can improve speech learning.

I sought to answer this question with Patricia K. Kuhl, an expert in early childhood learning. We set out to study whether musical experience at nine months of age can help infants learn speech.

Nine months is within the peak period for infants’ speech sound learning. During this time, they’re learning to pay attention to the differences among the different speech sounds that they hear in their environment. Being able to differentiate these sounds is key for learning to speak later. A better ability to tell speech sounds apart at this age is associated with producing more words at 30 months of age.

Here is how we did our study

In our study, we randomly put 47 nine-month-old infants in either a musical group or a control group and completed 12 15-minute-long sessions of activities designed for that group.

Babies in the music group sat with their parents, who guided them through the sessions by tapping out beats in time with the music with the goal of helping them learn a difficult musical rhythm.

Here is a short video demonstration of what a music session looked like.

Infants in the control group played with toy cars, blocks and other objects that required coordinated movements in social play, but without music.

After the sessions, we measured the babies’ brains responses to musical and speech rhythms using magnetoencephalography (MEG), a brain imaging technique.

New music and speech sounds were presented in rhythmic sequences, but the rhythms were occasionally disrupted by skipping a beat.

These rhythmic disruptions help us measure how well the babies’ brains were honed to rhythms. The brain gives a specific response pattern when detecting an unexpected change. A bigger response indicates that the baby was following rhythms better.

Babies in the music group had stronger brain responses to both music and speech sounds compared with babies in the control group. This shows that musical experience, as early as nine month of age, improved infants’ ability to process both musical and speech rhythms.

These skills are important building blocks for learning to speak.

Other benefits from music experience

Language is just one example of a skill that can be improved through music training. Music can help with social-emotional development, too. An earlier study by researchers Tal-Chen Rabinowitch and Ariel Knafo-Noam showed that pairs of eight-year-olds who didn’t know each other reported feeling more close and connected with one another after a short exercise of tapping out beats in sync with each other.

Another researcher, Laura Cirelli, showed that 14-month-old babies were more likely to show helping behaviors toward an adult after the babies had been bounced in sync with the adult who was also moving rhythmically.

There are many more exciting questions that remain to be answered as researchers continue to study the effects of music experience on early development.

For instance, does the music experience need to be in a social setting? Could babies get the benefits of music from simply listening to music? And, how much experience do babies need over time to sustain this language-boosting benefit?

Music is an essential part of being human. It has existed in human cultures for thousands of years, and it is one of the most fun and powerful ways for people to connect with each other. Through scientific research, I hope we can continue to reveal how music experience influences brain development and language learning of babies.