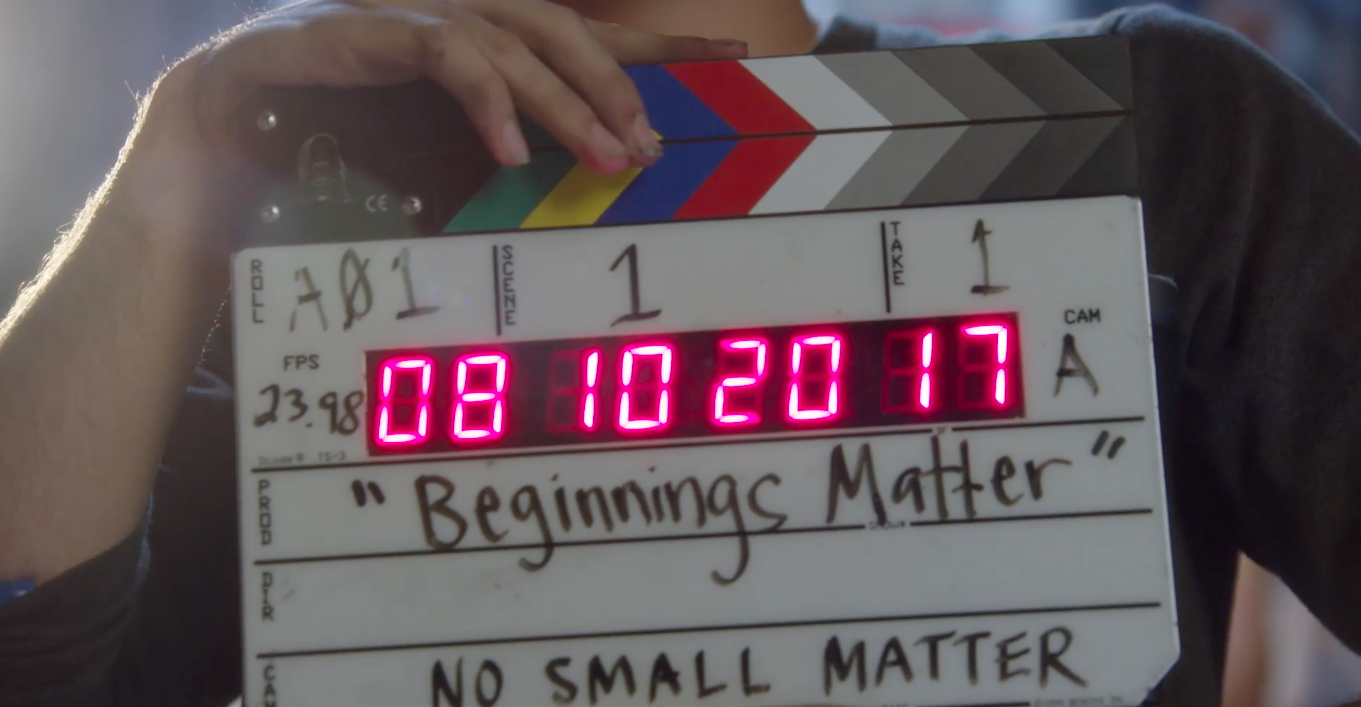 Today we feature the new film No Small Matter, “the first feature documentary to explore the most overlooked, underestimated, and powerful force for good in America today: early childhood education… The film lays out the overwhelming evidence for the importance of the first five years, and reveals how our failure to act on that evidence has resulted in an everyday crisis for American families, and a slow-motion catastrophe for the country.” The producers’ overview is below.

There are 24 million children under the age of six in America today. You know how many of them have to be taken care of all day, every day by an adult?

Who provides that care—and how they do it—is the most overlooked, underestimated, and potentially game-changing issue in America today. Directed by an award-winning team of filmmakers, No Small Matter is the first feature documentary to lay out the overwhelming evidence for the importance of the first five years, and to reveal how our failure to act on that evidence has resulted in an everyday crisis for American families, and a slow-motion catastrophe for our country.

Over the last twenty years, a revolution in our understanding of early childhood has led to one, inescapable conclusion: the experiences we have in the first five years of life shape our brains and bodies in profound and lasting ways; it’s no longer about “nature versus nurture”, but how the two work together to shape who we become. Using cutting-edge technology, neuroscientists like the ones at the Institute for Learning and Brain Sciences in Seattle are starting to unlock the secrets of the infant brain, recording in real time how hearing a song, seeing a face, or feeling a touch changes the brain. What the research has revealed is that it’s not flashcards or fancy apps that help build a healthy brain—it’s everyday, back-and-forth interactions with loving, supportive adults. In the first five years, being taught and being taken care of are one in the same, and “school” is basically anywhere with anyone.

But even as we’ve come to understand what kids truly need to thrive, social, economic, and demographic changes have made it harder and harder for parents to give it to them. In 1950, just 12% of all moms with children under age five were in the workplace; today, it’s 65%, a huge change, with no equivalent shift in public policy or attitudes. Wages have stagnated, schedules are unpredictable, there’s less support from extended family, and education is increasingly important. In order to make ends meet, parents desperately need to find a place to put their kids. But today, in 33 states, childcare for an infant costs more than tuition at a public college, and just 10% of the childcare in America is considered high quality. The stress of America’s “Wild West” approach to childcare takes an enormous financial and emotional toll on families, and it’s all happening while the child’s brain is growing faster than it ever will again (from 25% of its adult size at birth to 90% by age five), making over a million neural connections every second. As one mother in the film says, “It’s not supposed to be this way.”

But because it is, an array of other problems follow, many of which have only recently come to be linked to disparities in 0-5. Higher income parents have more money and time to invest in their kids’ early care and education; as a result, kids from wealthier families start kindergarten up to two years ahead of low-income kids, a gap in opportunity that becomes a gap in achievement that only reinforces the cycle of poverty. Kids who fall behind in school are more likely to drop out, and high school dropouts are eight times more likely than graduates to end up in prison. As the head of the Pennsylvania Department of Corrections tells us, “It’s really simple. True criminal justice reform is investing in early childhood education.” It’s a sentiment echoed by a trio of retired military commanders, who note that an astonishing 71% of all Americans between the ages of 17 and 25 can’t quality for military service, either because they’re too poorly educated, they have a criminal record, or they’re physically unfit; to them, our failure to invest in early childhood education is a full-blown national security problem.

More haunting still is the devastating impact of “toxic stress”. When a young child experiences constant, inescapable stress—violence, abuse, neglect, parental drug use or mental illness—and there’s no supportive adult to protect them from it, their fight-or-flight response goes haywire, flooding their brain and body with powerful hormones like adrenaline and cortisol. Over time, these chemicals start to corrode the wiring of the brain and damage nearly every other system in the child’s developing body. In the short term, toxic stress affects a child’s ability to learn, control their emotions, and get along with others. Remarkably, however, its shrapnel-like impact can show up years, even decades down the line, in health and behavior problems. As one expert declares, “Experiencing high doses of early adversity doubles your risk of seven out of the ten leading causes of death in the United States”: heart disease, diabetes, COPD, even suicide. While toxic stress can affect any child, rich or poor, low-income kids are especially vulnerable to it. Today, that’s nearly half the children under six in America.

No Small Matter brings the case for early childhood education to life in a variety of ways, from high-end 2d graphics, animation, and YouTube videos, to expert interviews and unexpected doses of humor (like Cookie Monster singing “Total Eclipse of the Heart”). But it’s the memorable characters that give the story its emotional punch. Rather than focusing on families in the most dire or extreme circumstances (which all too often only serves to reinforce stereotypes about who these problems affect, and can leave audiences feeling like the solution is simply a heroic effort from an extraordinary individual), the film highlights the stories of ordinary Americans and their day-to-day struggles: a middle-class, African-American couple in Yorktown, Virginia, searching for affordable, high-quality childcare for their 7-month-old; a white couple in Henderson, Nevada, struggling to do the best by their four-year-old son despite the stresses of minimum wage jobs and irregular schedules; an Hispanic mother of four in Waco, Texas who finds hope in a free program that combines high-quality childcare with parenting and job training classes; and an African-American mother and U.S. Army sergeant whose four-year-old daughter is thriving in a preschool classroom subsidized by the military.

As with all early learning settings, the success of that classroom is the result of the relationships between the adults and the children. Like the kids, audiences will fall in love with Ms. Giannini, the wry, tattooed lead teacher of the “Yellow Room”, only to be heartbroken to learn that she’s leaving at the end of the school year because she simply can’t make ends meet, even with a second job as a bartender. The early learning workforce is among the most poorly paid in the country, making less on average than dog walkers and parking attendants. Ms. Giannini’s departure is a stark reminder that, first and foremost, investing in young children means investing in the people who teach and take care of them when their families can’t.

No Small Matter is unusual for an issue documentary in that there’s no real villain—unlike battles against Big Ag or Big Pharma, there’s no “Big Small Child” standing in the way of progress. Instead, the film is more an investment brief than an exposé, an argument that early childhood education is both the most powerful and the most plausible solution we have to begin to address a host of American problems. Emotional, entertaining, and ultimately inspiring, No Small Matter will change the way audiences see the world, and in the process, help turn early childhood education into the grown-up issue it deserves to be.