By The Editors
Best PracticesResearch Lab
on December 3, 20184 min read 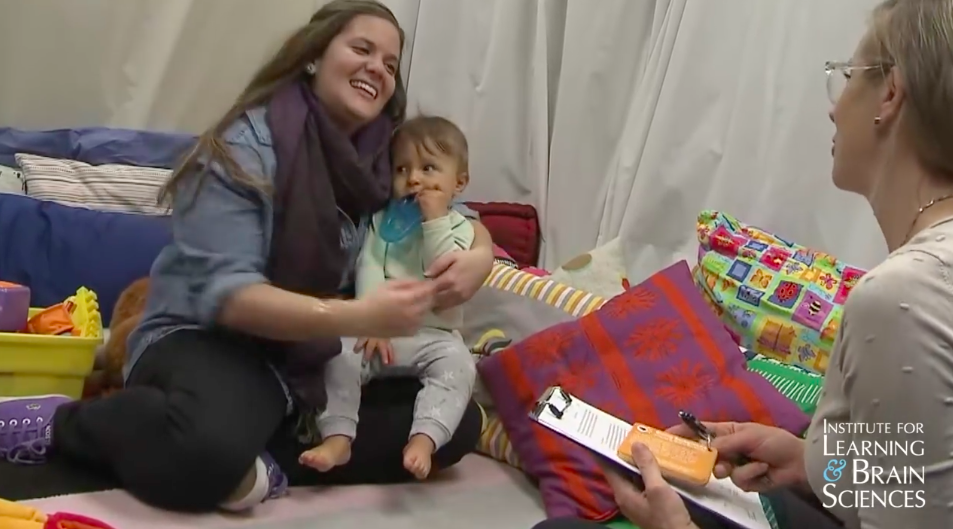 This post was originally published by University of Washington News. We have previously highlighted I-LABS work, including “3 Things Infants Learn Through Observational Learning” and “How Do Babies Learn Social Behaviors?“

When it comes to helping infants learn to talk, it’s not just how much parents say, but how they say it.

Speaking directly to the baby with a style of speech known as “parentese” — talking slowly and clearly, often with exaggerated vowels and intonation — appears to improve infant language development. A new study from the University of Washington’s Institute for Learning & Brain Sciences (I-LABS) shows that parents who learn how and why to speak parentese can have a direct impact on their children’s vocabulary.

“We know from over 30 years of research in the lab that infants prefer parentese over standard speech, and that infants who are exposed to more parentese at home have larger vocabularies as toddlers,” said Patricia Kuhl, professor of speech and hearing sciences and co-director of I-LABS. “We wanted to explore whether parents benefit from “coaching” by adapting their own speaking style and whether this would affect their child’s language outcomes.”

In the new study, published online in Developmental Science, researchers used audio recordings of participating families’ typical weekends. Parents were randomly assigned to the “coaching” or “control” groups: Those in the control group were recorded, while those in the coaching group not only were recorded, but also participated in individual parent coaching sessions during which they received language-interaction tips in the form of cards with “brain building” tips from Vroom, and discussed their recordings with the coach. Babies whose parents received coaching during the study were significantly more verbal by 14 months of age.

Parentese is not what many people think of as “baby talk.” The latter is typically a mash-up of nonsense words and silly sounds (think: “cutesie-wootsie”), whereas parentese is fully grammatical speech that involves real words, elongated vowels and exaggerated tones of voice – it sounds happy and conveys total engagement with the child. Spoken directly to the child — and used across many languages — parentese resonates with infants, researchers say, and helps babies tune in socially to their parents, and motivates them to talk back, even if that just means babbling.

“Most parents know that the amount of language their child hears is important. What we shared with them through coaching is that how they talk to their baby may matter even more,” said Naja Ferjan Ramírez, a research scientist at I-LABS and lead author of the study. “We explained to them the research behind parentese, and made sure they were aware of the connection between their language input, and their speaking style in particular, and their baby’s language outcomes.”

The research team decided to examine the role of coaching, Ferjan Ramírez said, because parents vary widely in their understanding of how babies learn to talk, and of their own role in language development. So the study pool deliberately included people of different socioeconomic backgrounds.

The study involved 77 parents and their infants, who were 6 months old at the beginning of the project. All families were given a lightweight recorder, to be worn by the baby in a specially designed vest, and asked to record the entirety of two weekend days when babies were 6, 10 and 14 months old. The device can record everything the baby hears and says, so it allowed researchers to track both parent and infant speech. Individual coaching sessions occurred at six and 10 months. Researchers evaluated the recordings of families in both groups.

The coaching sessions for parents in the intervention group provided lessons and feedback on specific communication strategies: parentese, speaking directly to their child, and incorporating language in one-on-one interactions. During the sessions, the coach played recordings of specific speech styles and compared the parents’ own recordings to research-based targets for child language development. Parents then were provided tips on how to use these communication strategies through daily routines, such as mealtime or bath time.

According to the study, between six and 14 months, parents in the coached group increased the amount of speech directed to their child and increased parentese by 15 percent. Parents in the control group showed less growth in their use of both strategies, averaging about 7 percent.

To measure child language skills, the team classified infant recordings as “babbling” — use of vowels, consonant-vowel syllables and strings of word-like sounds —  or as words if they were clearly recognizable English words. For the purposes of this study, all participating parents spoke English as their primary language.

A key takeaway is that any parent can incorporate these communication strategies — using parentese, interacting with the child — in their usual activities.

“Language learning can be ignited during daily routines, such as diaper changes, grocery shopping or sharing a meal,” Ferjan Ramírez said. “Everyday moments and daily interactions really matter, and parents can create more such moments and be more intentional about them.”

The study showed that parent speech is malleable, across a wide range of socioeconomic backgrounds, she added.

“Parents are a child’s first and most important teachers, and we are happy to show they can have an immediate positive effect on the growth of their child’s language. Early language skills are important predictors of a child’s learning to read and of their success in school, and parents can directly affect their child’s outcomes in this way.”

The study was funded by the Overdeck Family Foundation and the I-LABS Ready Mind Project. Other authors of the study were Sarah Lytle, outreach and education director at I-LABS, and graduate student Melanie Fish.