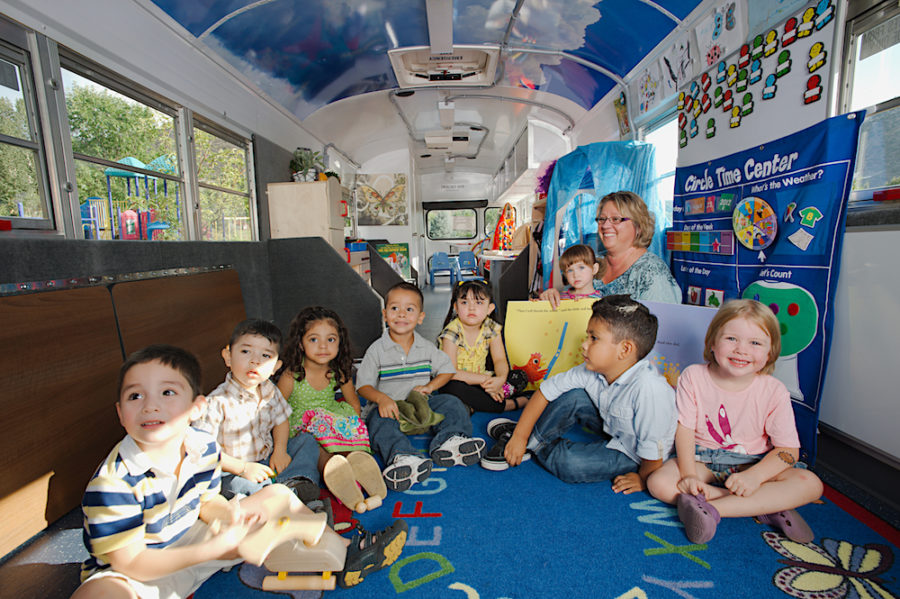 By The Editors
Case Studies
on December 4, 20185 min read

In several of Colorado’s rural communities, some children have long attended preschool in specially equipped mobile classrooms with names like Gus the Bus, Magic Bus and El Busesito.

The rolling preschools, which travel to apartment complexes or mobile home parks a couple times per week, are seen as an innovative way to reach children who can’t access traditional bricks-and-mortar preschools.

Mobile Preschools on the Move

Last spring, a mobile preschool rolled into the northern Denver suburbs, and the city itself could eventually get one, too. Officials at Mile High United Way are exploring the concept and Denver school district leaders say they hope to join the project if it moves forward.

“It’s no surprise there is a lack of both affordable and accessible high-quality early childhood education in our community,” said Karla Maraccini, vice president of community impact and strategy at Mile High United Way. “One of the solutions we’re exploring is mobile preschool.”

Such programs aren’t widespread in Colorado or the nation, but the meet-them-where-they-are approach has plenty of precedents. Think bookmobiles or mobile blood drives. Advocates say mobile preschools represent a valuable school readiness initiative for young children cut off from traditional early education experiences.

“Mobile can be used in so many ways. I think of the food trucks, how that’s been kind of a revolution,” said Logan Hood, who manages the Preschool on Wheels program in Garfield County in western Colorado. “When you come to that person’s community and you’re willing to open your doors … it’s lasting.”

Rany Elissa and Alexa Garrido, the husband-wife team that recently launched the mobile preschool program in Federal Heights north of Denver, said they plan to acquire another bus and expand their program to nearby Thornton in 2019. They’re also looking at Denver, possibly in Park Hill or a neighborhood in northwest Denver, and have had discussions with Mile High United Way on the topic.

The pair, which separately run a company that provides tutoring and other services to K-12 students across the state, said seeing the academic struggles of older students convinced them they needed to start earlier. That’s why they spent more than $200,000 to gut a 19-passenger bus and remake it into a preschool space with a bathroom, running water, heat and air-conditioning.

The colorfully painted bus spends most weekdays at the Denver Cascade Mobile Home Park, where eight children attend morning preschool and another eight attend in the afternoon. The children, all English language learners, attend the year-round program four days a week.

Many participating families walk to the bus each day, shut out of local building-based preschools that are full, or that they can’t afford or can’t reach, Garrido said.

Large swaths of Adams County, where Federal Heights is located, are considered child care deserts because the number of young children far exceeds the number of child care and preschool slots, according to a 2017 report from the Center For American Progress.

Parts of Denver have that designation as well and additional city data show fewer than a quarter of 3- and 4-year-olds attend preschool in certain areas, including parts of north Denver, far northeast Denver, and a few neighborhoods along the city’s eastern border with Jefferson County.

Elissa and Garrido’s program, Right On Mobile Education, is one of four mobile programs licensed by the state, which means it meets basic health and safety standards.

While Colorado’s mobile preschool operators emphasize the pains they take to ensure quality — using reputable curriculums, incorporating social-emotional learning and employing credentialed bilingual teachers — the programs don’t get a quality rating from the state the way building-based preschools do.

At that age, “their brains are like little sponges,” said Deb Dutmar, manager of the Magic Bus program for the Vail Valley Foundation. “Even that concentrated time with them singing songs, doing circle time, having a snack, reading a book, having play time … just those two days a week, it’s amazing how they grow.”

But mobile programs, which include parent workshops and home visits, aren’t cheap. Plus, they usually don’t qualify for government dollars that support traditional preschools, and families pay nothing or only a tiny fee to participate. In other words, they require lots of grants and donations to stay afloat.

The Magic Bus program costs $280,000 and Preschool on Wheels costs $350,000 a year. Hood, manager of the Preschool On Wheels program, said she spends lots of time fund-raising and, when she fields calls from other communities, emphasizes the need to find sustainable funding.

Both Hood and Dutmar say they routinely get calls from all over the country — Hawaii, Maryland, Louisiana, California and elsewhere — from people wanting to hear more about mobile preschools.

It’s important to consider community needs in developing such programs, Hood said, “It’s not saying, ‘This is cute. Let’s do this.’”

One mobile preschool program in Oakland, California, thought to be the first in an urban setting during its pilot phase in 2015, was discontinued a year later.

Elise Darwish, who was an administrator at the charter school network operating the bus when the program launched but not when it ended, said she believes the amount of regulation and red tape involved in running the program led to its demise.

Ensuring basic sanitation can be a stumbling block, too. Since Dutmar has one Magic Bus without a bathroom, it must be parked near a public restroom. Especially in the winter, bundling up wiggly children just for a bathroom break eats up a lot of time, she said. The good news is the foundation just finished its fund-raising campaign for a second Magic Bus motor home, which will arrive bathroom-equipped next summer.

Elissa and Garrido faced their own share of logistical headaches when they decided to launch their mobile program. They quickly realized that most city zoning rules don’t easily accommodate mobile preschools.

“No one knew what to do with us,” Elissa said. “We were not a food truck. We were not selling anything.”

Eventually, they found a passionate advocate in the mayor of Federal Heights and successfully navigated the city’s zoning ordinances. By next summer, they hope to add a second bus that will offer preschool at the Woodland Hills mobile home park in Thornton.

Denver, they hope, won’t be far behind.

Originally posted on Chalkbeat by Ann Schimke on November 12, 2018. Used with permission. 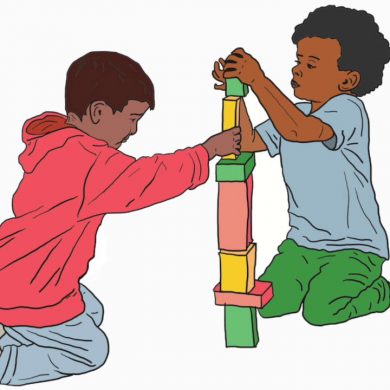 Synchronized Movement: The Story Behind a Prizewinning Video on Preschool Behavior