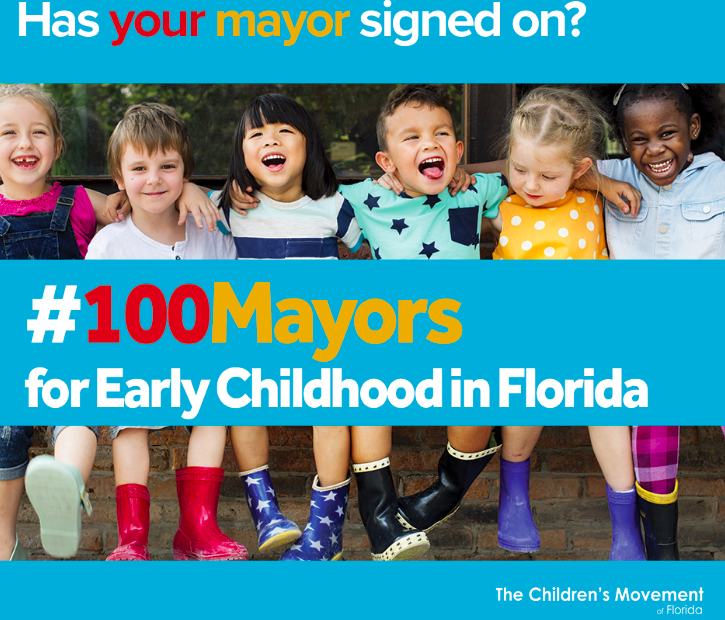 The Children’s Movement of Florida has pulled together more than 100 Florida mayors and got them all to sign a letter to FL Governor Ron DeSantis with a clear message: Prioritize early childhood learning.

The group “asked the governor to include early learning and health care among his top initiatives. As stewards of their communities, these mayors from all across Florida understand the impact of investing early in Florida’s children.”

The letter begins: ““As mayors, we take seriously the responsible stewardship of our constituents’ tax dollars” The group states: “The mayors reflect that by investing in early learning initiatives, more widespread health care for children under five, and greater access to parent support resources, Florida actually saves money in the long run. Beyond what is right, prioritizing Florida children’s early lives is also the most practical, effective and efficient solution to numerous problems faced by our state, like crime and workforce gaps.”

Four of the mayors from major Florida cities — Orlando, Naples, Gainesville, and Miami — wrote about their reasons and mission recently in the Miami Herald, stating:

“We mayors and our colleagues take seriously the responsible stewardship of our constituents’ tax dollars. We also know that prioritizing early childhood development is a wise investment in Florida’s future.”

“We have plenty of evidence for saying so. Research shows that early investment in young children provides greater prosperity for future generations; research also tells us that for every dollar spent on early-learning initiatives, at least $8 will be returned to society in the form of fewer high school dropouts, fewer people in prison and higher earnings.”

The Children’s Movement of Florida further notes: “Currently, a mere 1.5% of Florida’s total budget is spent on programs that benefit children from birth to age five. Meanwhile, about 325,000 children in the state lack health insurance. More than 220,000 children are born in Florida each year and only 54% are deemed “ready” by the Department of Education when they enter kindergarten. By third grade, nearly 40% of students are not reading at grade level, and it is difficult for them to catch up from there.”

In their Miami Herald piece, the mayors make two recommendations:

“Make high-quality pre-kindergarten a priority in his education agenda. (Too often, too many people think of education as only the years from kindergarten through 12th grade.) The 100 Mayors and The Children’s Movement would encourage the governor and state legislators to expand their notion of formal education as beginning in Florida’s pre-K, available since 2005 to all 4 year olds. Florida has many high-quality pre-K programs, and not a few otherwise.”

“We urge the governor to think about ‘high quality’ as the imperative in all early-learning and childcare settings, from birth onward. Get those early years right, and chances are children will have momentum all their lives. (Today, at least 30 percent of all children entering public school are significantly behind, and we know that most of those then fall further behind.) We ask the governor to prioritize these matters in both the budget and legislative agenda.”