Meeting (and Teaching) Families in Unexpected Places Can Transform Cities 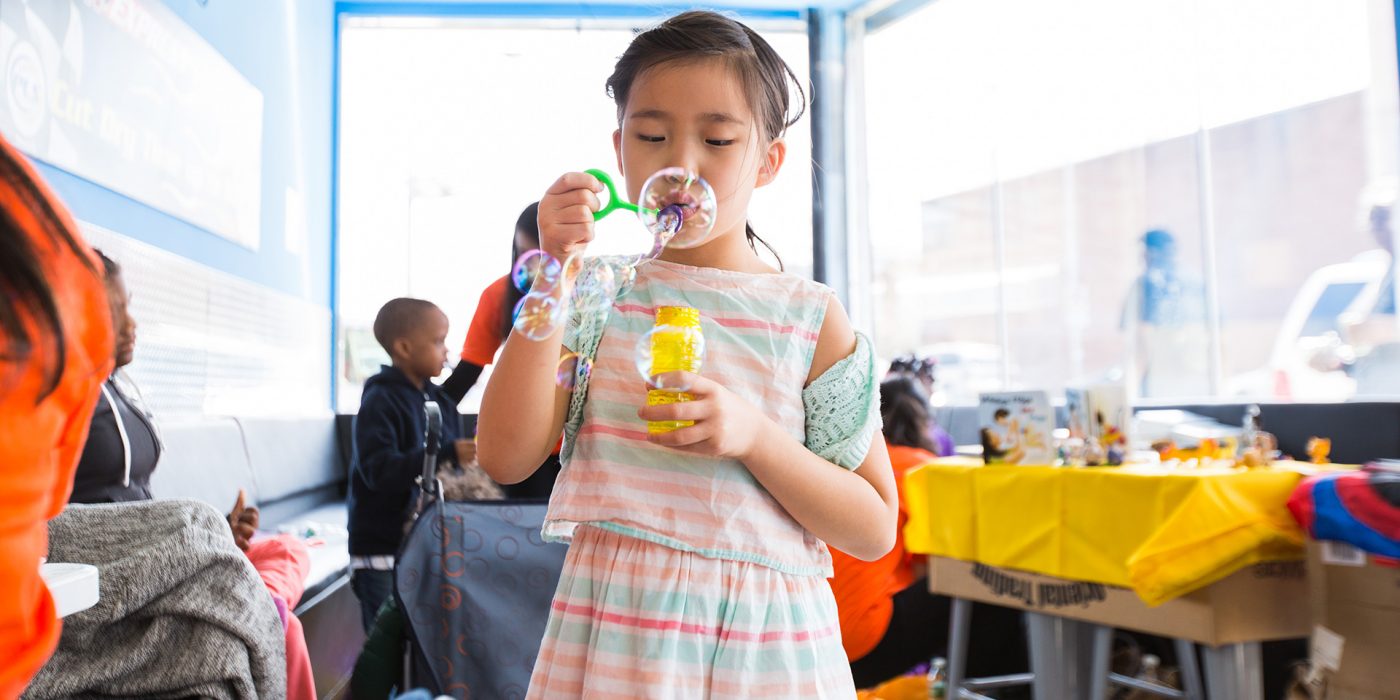 School is a great place to learn, but it’s not the only place. No matter how excellent our teachers are, no matter how enriching the curricula, school accounts for only about 20 percent of children’s waking hours. That’s why a growing number of education pioneers are building out nontraditional sites for young minds to develop their language skills and to learn about their world.

The City As Classroom

The movement started small, about ten years ago in Philadelphia grocery stores. “At first,” recalls Dr. Kathy Hirsh-Pasek, “we merely changed the signage.” She and her colleagues posted messages throughout a family-owned chain—things like: I come from a cow. What else comes from cows? A giant fake broccoli proclaimed: Healthy Language Helps Your Children Grow.

“Grocery stores are such rich places for learning,” says Hirsh-Pasek, now the Stanley and Debra Lefkowitz Faculty Fellow in the Department of Psychology at Temple University and a Senior Fellow at the Brookings Institution. “There are numbers, letters, geography, science, social studies….” Speaking of numbers, that first, humble experiment in signage netted a 33 percent increase in language used by families in the stores. (Here’s why that matters.)

To build on this success, Hirsh-Pasek launched Urban Thinkscape, which transforms cityscapes into opportunities of playful learning. Hirsh-Pasek partnered with Brenna Hassinger-Das, Ph.D. (Assistant Professor of Psychology at Pace University), Roberta Golinkoff, Ph.D. (Unidel H. Rodney Sharp Chair at the University of Delaware School of Education), and others, including the Tel Aviv-based architect Itai Palti.

“It’s about doing something with the places we have to be anyway,” summarizes Hassinger-Das. Bus stops, where wait times can be as long as 15 minutes (or, occasionally, even longer) were a logical next choice. The first bus stop transformed by Urban Thinkscape grew out of a marriage between developmental science and Palti’s development of the Conscious Cities movement, which advocates for “places, spaces and objects that have an awareness of, and responsibility towards their users.”

Read the Brookings Institution report, Learning Landscapes: Can Urban Planning and the Learning Sciences Work Together to Help Children?

Even more important was the involvement of the people who would be using the shelters. The Belmont Alliance Civic Association—and its President, Bettye Ferguson—was the primary community partner for the development and support of Urban Thinkscape. Hassinger-Das emphasizes the importance of engaging community members in everything from initial design to data collection. She has been especially gratified to see commuters taking the time to maintain the space. “It belongs to the neighborhood,” she says.

Because the neighbors get so involved, Hassinger-Das says she expects that the next round of related projects, in other cities, could look and feel very different from the ones in Philadelphia. In the long run, she says she hopes that Urban Thinkscape will spark “a new way of thinking that can be implemented by cities and governments.”

“We come here every week and have fun” isn’t the way young children normally talk about a laundromat, a place that most of us associate with boredom and lost socks. For a single mom like Venus, whose work schedule means her family has to go at night, often staying till 10 p.m., it matters that her child actually enjoys the weekly laundry errand. There’s one less thing to battle about. When Venus takes her preschool daughter to her laundromat in the Bronx, she knows it’s a safe, welcoming place—and one of the few places with books to read.

“Parents walk an extra six blocks to get to one of our Family Read, Play & Learn Spaces,” notes Jane Park Woo, director of the Clinton Foundation’s Too Small to Fail Initiative, one of the most influential programs tracking data in this educational arena. Talking Is Teaching, another Too Small to Fail project, supports public awareness of the power to boost children’s early brain and vocabulary development through simple, everyday actions. In Minneapolis, Let’s Talk about the Bus leverages another period that could otherwise be fatally dull.

The Clinton Foundation partnered with the Coin Laundry Association and Libraries Without Borders to form the Laundry Literacy Coalition, which works to make early literacy resources available to underserved communities through local laundromats in communities nationwide. “So many communities across the country lack books,” Woo says. “And this is one of our most efficient ways of getting books into the hands of the kids who can use them most.”

Simple, inexpensive creative adjustments to public spaces can ignite the curiosity of children who pass through them—and in doing so, transform our cities.
The statistics on the gap in home libraries are alarming. In communities of concentrated poverty, there is only one age-appropriate book for every 300 children, according to Susan B. Neuman, professor of Literacy Development and Early Childhood at the Steinhardt School, New York University. Neuman co-authored a 2016 study about “book deserts,” warning that they may seriously constrain young children’s opportunities to come to school ready to learn.

Simply introducing quality books (and basic furnishings like a sofa, an alphabet rug, and an magnetic board with ABC magnets) to book deserts makes a considerable difference; an evaluation of the pilot program found children engaging in 30 times more literacy activities in laundromats that include the spaces than in laundromats that did not have these areas.

The impact grows to a factor of 47 when librarians come to read aloud and lead conversations and games. “We found that having librarians model this behavior is so important,” says Woo.

Unsurprisingly, Brian Wallace of the Coin Laundry Association and its LaundryCares Foundation is pleased to hear about customers making an extra effort to visit one of his members’ businesses, but he sees the literacy sites as a way of deepening the connection between the industry and the primarily low-income, renter-occupied, densely populated urban communities it serves.

“We have what they call in the business ‘long dwell time’,” Wallace says. “This answers the question: how do we upcycle that idle two and a half hours per week?” He notes that early childhood education is not the owners’ area of expertise. “All they know is their customers love it.” Wallace says that Chelsea Clinton’s visit in Chicago “gave us a real spark.”

Family Read, Play & Learn Spaces are currently in laundromats in New York City, Chicago and Los Angeles. More than 600 new sites are expected to open across the country by spring 2020.