By The Editors
ConversationsELN Studio
on December 27, 20186 min read 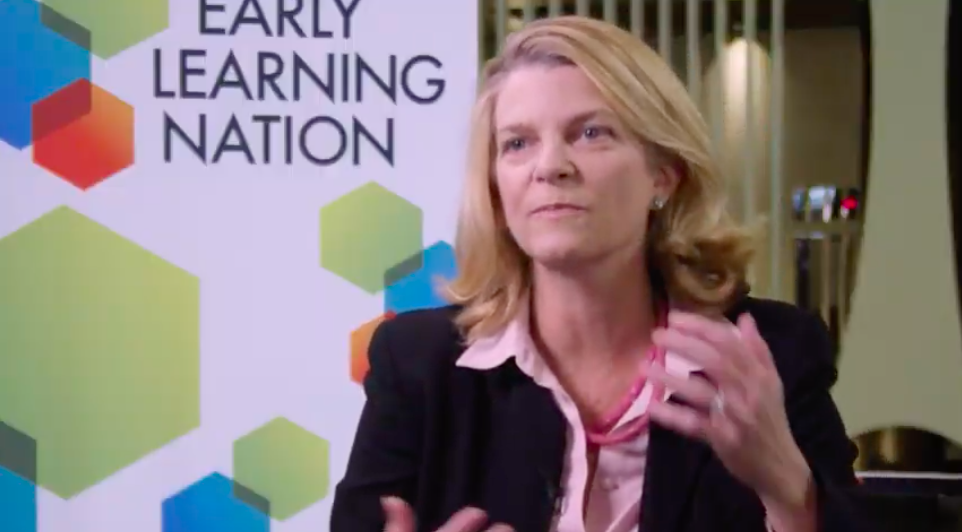 Building successful early learning programs is hard. Figuring out how to do it in some of the hardest to reach corners of the globe? That’s a case for Cynthia McCaffrey, director of UNICEF’s Office of Innovation, who describes the logistics, partnerships and new ideas that drive success.

Early Learning Nation: Cynthia, thank you so much for coming to the ELN studio.

Cynthia McCaffrey: Thank you for having me. It’s good to be here.

Early Learning Nation: UNICEF does obviously extraordinary work with and for children and families around the world. How important is and how difficult is it to establish the proper environments to even allow early childhood learning to properly develop?

Cynthia McCaffrey: To your first question, how important is it? It’s extremely important because our brains, anyone’s brain, is developing faster and more intensely in those early years of life. We talk about the first thousand days at UNICEF.

How difficult is it? It’s becoming a lot easier for two reasons. One is there’s more data and information out there. We’re seeing and learning from hard data that when you invest in a child’s early development, early life, getting them ready for school, they’re better students, they stay in school, they perform better, they’re more productive adults.

A second, though, is partnership. Ready Nation is bringing together not the usual suspects to work together to use data and information to take action together. So one of the exciting things that’s happening here at Ready Nation and that we’re doing all the time is working with local governments, working with national governments, but also working with non government organizations and the private sector. The private sector’s coming in with their resources, not just money but also their brains, their information, their experience.

The other is sitting with young people themselves and with parents to ask them, “What are we not thinking of? How could we do this together?” And we’ve got a great program in Mexico that we designed not just with the people who had the money or the policy decisions, but with the parents themselves.

Early Learning Nation: I wanted to ask you about the Mexico program. Because when you think about places like Mexico, but beyond Mexico and in many of the other countries, and I’m quoting from UNICEF here that much of your work focuses on children who are uprooted, “Driven from their homes by conflict or disaster while others are migrating in the hope of finding a better, safer life.” How can a child focus on advancing learning in the cases where families may just be trying to survive?

What innovation means for us at UNICEF is doing something new and different that adds value.”

Cynthia McCaffrey: So we have the world … Our world has about 50 million on the move. They’re migrants, they’re refugees, they’re internally displaced in their own countries. So you’re absolutely right. It’s an enormous problem, and families are just trying to survive. However, we get through this, and we make progress at three main things. Persistence, through partnership working together and then practical solutions.

So on persistence, that’s the main piece. I was in the Philippines shortly after the cyclone a few years ago. We had built child-friendly spaces where parents could bring their children to continue at least playing in a safe place and even some learning. They were packed. And these children were not quiet sitting in a corner. They were playing and laughing and yelling and screaming. They are not giving up on trying to rebuild their lives, even though they had lost homes, they’d lost family members. And so that persistence of their coming … They’re meeting us more than halfway. How can we not as a global community meet them and go the rest of the way with them?

Early Learning Nation: That’s got to be such a critical moment. Disaster relief and then partnering. And there is another area where businesses globally and with supply chain do incredible work in terms of delivering-

Early Learning Nation: … disaster relief in time when it’s needed. Is delivering early childhood learning and development at those times, is that part of the need in disaster relief also?

Cynthia McCaffrey: Yes. Absolutely. So when we talk about making sure that families and children survive, it’s getting them the basic health, the basic nutrition, but absolutely getting them back into learning environments where it’s safe. It gives children some normalcy. It gives parents a break where they can help figure out how they’re going to build their family’s lives.

Early Learning Nation: Rebuild infrastructure. You’ve got one of the coolest jobs. You are Director of the Office of Global Innovation.

Early Learning Nation: Yes, title aside, that’s just really cool! I’ve always wanted to meet the person who is innovating globally, so it’s great to meet you. What do you see out there? I know that innovation means a lot of different things. So I guess first of all, what does innovation mean to you? What does it mean in terms of the early learning space? And is there anything that in terms of innovation we maybe should keep an eye on five, ten years down the line?

Cynthia McCaffrey:  Absolutely. One is I am a little point, and UNICEF has a tradition of innovating. From digging water pumps in the ’70s to creating a Plumpy’nut that really helps children in emergencies. It’s a peanut butter paste. We’ve been innovating for years. And I just get to help right that wave.

What innovation means for us at UNICEF is doing something new and different that adds value. Fundamentally, we don’t come up with innovations and find a problem. We do it the other way around. We go in with our colleagues on the ground in South Sudan or Democratic Republic of Congo. What is your challenge? How do you get kids ready for school? How do you help parents have the skills they need to raise healthy babies and then young children? And then we figure out what innovation we might bring.

Two things, is we’ve got real time communication. We started with flip phones eight years ago trying to connect with young people, with young parents just through SMS. Today we’re moving to using things like WhatsApp or Facebook Messenger so that if SMS is prohibitive, if you’ve got digital, we can communicate with you. Ask you what’s wrong. Ask for solutions. Give you resources. So that’s a solution that I think will keep going as we connect the world and really think about how we get useful information to people to help build the young citizens so that they can be tomorrow’s leaders.

Early Learning Nation: To close out: As you think about your focus, family supportive and friendly policies. Is that kind of the theme of what you’re about?

Cynthia McCaffrey: Yes. I think one of the key things that, because UNICEF has a global reach, we’re really trying to look at how you create that workforce of tomorrow. And it’s been interesting to be here at Ready Nation and talk about that.

And we’re trying to look at how you shift four main things. How you shift just from maternal leave to family leave, so that it’s both parents. How you shift from infrastructure to the person. Rather than just breastfeeding rooms, how you make breaks available so you can use them. How you’re shifting from looking at making things available, closing gaps for childcare and using that to create places where parents can come to work but leave their children in a safe place.

People are talking about scholarships here. How you close those gaps for an early childhood daycare center. We’re trying to shift from infrastructure to really more people focused, and business has a huge role to play there. To make it really specific to their context, their markets and make it global where everybody can benefit.

Early Learning Nation: It’s an incredible range of initiatives and areas, and it’s such a wide space. Thank you for your work, and thank you for stopping by the ELN studio.

Cynthia McCaffrey: Thank you for having us.