By The Editors
ConversationsELN Studio
on December 7, 20187 min read 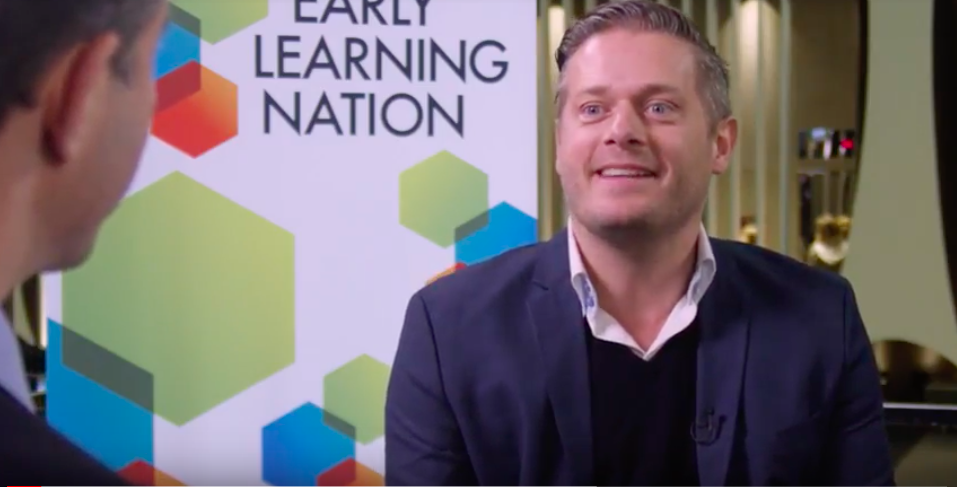 What role does play play in early learning? Kasper Ottosson Kanstrup, vice president and global head of Communities through Play at The Lego Foundation, pulls out his bag of toys, er, research and explains the science of how children learn through play.

Early Learning Nation: We know, Kasper, that children love to play. What role does play have, though, in early learning?

Kasper Ottosson Kanstrup: Let me begin by saying that childhood and play goes hand-in-hand, right? Where children has a natural ability to learn about the world through play, right from early infancy, so that’s actually where it starts.

We know that, in the early years, the first 1,000 days of a child’s life, the brain develops much faster than in any other period of life. That creates a window of opportunity where we can actually help the child develop, and stimulate them in a way that will have greater impact on their life trajectory than the rest of their life.

On top of that, you can also say that research that indicates that to stimulate and have that interaction with children in their early years, then play is a natural approach, a natural way for us to interact with them, and make them learn.

Early Learning Nation: Is play a starter to the learning process, or are there specific skills that kids can learn from playing? Or is it a little bit of both?

Kasper Ottosson Kanstrup: I would actually say it’s both. Play is both a starter, but it’s also something that drives the skills. You must, say, look at it this way, that we know that the world is becoming increasingly complex. That there’s more and more disruptions here. We see that there is a need for developing a certain kind of competences. If you look at it, all childhood experts, they say that we need to develop competences such as physical, social, and emotional, cognitive, and creative skills in children. Play can do that.

The reason why play is so good at doing it is that play helps us open up the children and motivate them to explore, and thereby, to learn about whatever task they’re engaged in. It, again, becomes a natural habit for them to learn.

Early Learning Nation: It really must be motivating, and obviously, play and fun, it creates a different environment, and I would assume one, then, where kids can take on new learning and learn new skills. There’s something on the website, the part about this type of learning, where you state that “Play is too often underestimated in early-childhood programs, despite being the most natural way of acquiring essential life skills in early-childhood.” That makes total sense to me. Why is the role of play not well enough understood?

Kasper Ottosson Kanstrup: I think, when we look at it, play is really looked at as a leisure-time activity, as something you do for fun.

Kasper Ottosson Kanstrup: Exactly. But play should be fun. Learning should be fun. We want children to learn in a motivated way. Otherwise, you end up having passive learners, who’s actually not turning into lifelong learners, and we need that. Corporate-sector need it. Everybody needs it.

Early Learning Nation: Let’s talk about one of LEGO’s programs, your Communities of Learning through Play Program. What are your focus areas there?

Kasper Ottosson Kanstrup: Well, I can say the program is a geographical deep-dive approach, where we work in four different countries. We work in Denmark, Ukraine, Mexico, and South Africa. We work to establish play as a systemic approach to early-childhood development, as well as learning, and thereby actually drive a much more stronger focus on competency development of children in these countries, and work closer together with governments, local authorities, to do this.

Early Learning Nation: You mentioned the four countries. I’d like to hear about a couple of them. In Mexico, I know you have a couple of programs. In one of which, you’re working with the government to support practitioners. We hear about the importance of engaging children. The importance of engaging parents. This is a program that engages practitioners. Talk to me about that program.

However, we also see that those are very much looking at … Good quality is whether or not they are clean, whether they’re painted, whether children are registered when they come to the center. But they’re not so much looking at the content.

Somehow, we lose our natural ability to play throughout the way we have been schooled. When then the children come in and meet the practitioners in these childhood centers, they’re not natural facilitators of play anymore, so they don’t know how to actually move the children from A to B in their learning in a playful way.

Then we end up with something that can be very dangerous, and that is repetition. Because if a child learn to repeat something, they don’t necessarily know how to apply that knowledge.

Early Learning Nation: Another one of the countries you mentioned, South Africa. There, you are establishing something … I can only imagine that you’re the marketing genius behind this name … something you call Granny Garages. Please explain.

Kasper Ottosson Kanstrup: Actually Granny Garages is not me that is the marketing genius-

Early Learning Nation: Is it someone else?

Kasper Ottosson Kanstrup: Unfortunately. Granny Garages is a place where … often, the disadvantaged communities are bringing their children to a lady who is then taking care of them throughout the days. However, this lady has no professional training in how to take care of children. She’s doing it the best way possible, and she’s doing it from the right place in her heart.

We are, then, again, working together with her as an untrained professional, and see “How can you, with what you have, actually create playful learning environments?” What’s interesting here is you can play with everything. Scrap materials, whatever you have at hand, you can do storytelling. You just need to know how to be creative and engage the child.

Early Learning Nation: We know that. When a kid opens … You’ll forgive me … a box of LEGOs-

Early Learning Nation: We all want them to play with the LEGOS, but you know, sometimes they end up playing with the box.

Early Learning Nation: They can use any type of material. You also connect the education efforts … and you’ll correct me if I have it wrong … but in the home, in communities, and in early-learning and early-childhood centers. How do you connect those efforts, though, across those different areas?

Kasper Ottosson Kanstrup: We do it in different ways. But what we try, because we really want to achieve large-scale and systemic development here, so we want it to stay when also we are out of the country. What we do is, again, to have parents working closer together with the practitioners around the child.

Way too often, and that goes in actually most of the national systems, it’s a process that actually defines when a child is moving from this school to that school, and then ahead of that. But we need to actually look at the child and see what does he or she need? And how do we give and stimulate that, as the ones surrounding the child?

You, being the parent, and thereby the primary teacher of his or her abilities to, should we say, face life. But of course, also, the practitioner, who has very often a toolbox in their rucksack, and then can take it off and help us, to say, “If you do this, you can actually help the child moving in that direction, learning-wise.”

Early Learning Nation: What inspired you to get into this? I mean, tell me just a moment about you. How did you get to this role, and how did you get to a place where you’re connecting the intersection of business and an iconic plaything, LEGO, with early-childhood learning?

Kasper Ottosson Kanstrup: I come from the NGO sector. I have worked in one of the largest NGOs in the world, called SOS Children’s Villages. There, I could see that we did a lot of service deliveries. We did amazing work, but very often, we lacked a good partner for also developing content.

Because we all learn now, from Millennium Development Goals, that just getting children into school is not good enough. That doesn’t mean they’re learning. We need to have the right content in learning.

On top of that, I then worked with CSR, in that framing, and I had a natural exposure to what actually interests companies, and how we can create a win-win situation. That brought me to the LEGO Foundation.