By The Editors
ConversationsELN Studio
on December 14, 20187 min read 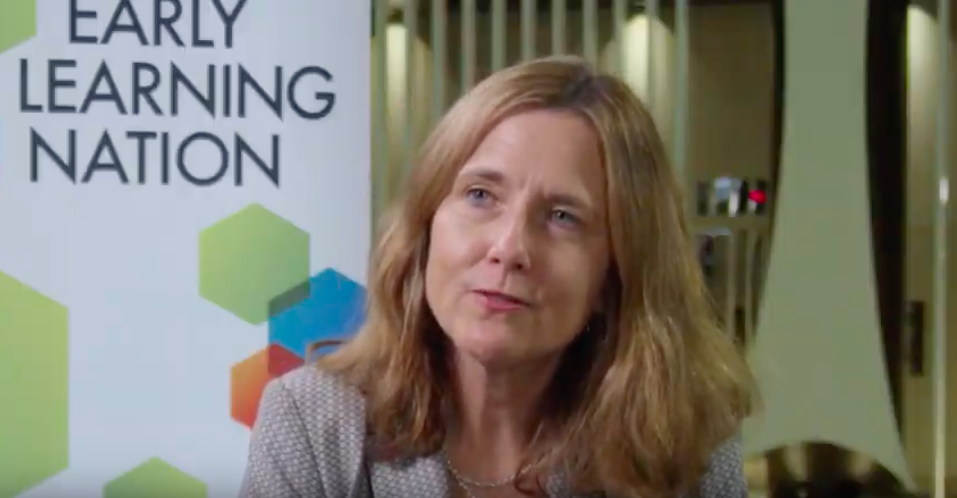 How can parents turn every day moments with their children – bath time, meal-time, even trips to the laundromat – into learning moments for their kids? Patti Miller, CEO of the Clinton Foundation’s Too Small To Fail, describes the importance of “language-rich parenting” and how no interaction (or child) is too small to ignore.

Patti Miller: It’s great to be here. Thanks for having me.

Early Learning Nation: It’s great to have you. So let’s start. Too Small to Fail. What is it?

Patti Miller: Too Small to Fail is the early childhood initiative of the Clinton Foundation. We started Too Small to Fail five years ago. It’s a public awareness and action campaign focused on parents and caregivers. And what we’re focused on doing is raising awareness about the importance of language-rich parenting in the early years, from the moment a child’s born and providing parents with tools so they can talk, read, and sing with their infants and toddlers starting at birth.

Early Learning Nation: So why the focus … And I want to ask you about language-rich tools. But let’s first talk about the audience, the parents, the caregivers. Why there?

Patti Miller: What we know is that the first three years of life is one of the most critical periods for brain development. We know what best stimulates brain development in those early years is talking, reading, and singing when parents or other caregivers are actively engaging with young children. We also know that by the time you get to kindergarten almost 60% of children in the United States lack the language and literacy skills they need to be successful in kindergarten. So what we’re trying to do is get awareness out to parents about how important it is to engage from the moment a child is born, even when they can’t talk back, so that we can be boosting their brains and they can be developing their vocabulary so they’ll be kindergarten ready.

Early Learning Nation: When you talk to a parent and say, “Anything, really, is a language-rich opportunity,” are they kind of self conscious about it? What do they say?

Patti Miller: What we try and do is have parents focus on everyday moments and routines. Even the most well-resourced parent is strapped for time, right? And if you’re a parent working a few jobs to make ends meet and someone tells you, “Talk, read, and sing every day for 30 minutes,” you would think, “I would love to, but I don’t have that much time.” So what we try to do is focus on everyday moments and routines, bath time, meal time, you’re in the grocery store. You’re commuting to work on the business or in your car. These are great opportunities to talk and sing with your child and to actively engage with them. Diaper changing time is another great time.

We have really tried to think about where parents are, what are the spaces and places that they go to regularly, and how do we meet them where they are. So laundromats is a great opportunities. We have developed this incredible partnership with the Coin Laundry Association, and Brian Wallace-

Patti Miller: … the CEO is here today. And it’s really about this opportunity of when a family goes to a Laundromat, it’s two and a half hours of time generally. And we’ve seen these YouTube videos of these children just bored out of their minds. And we thought, “What if we actually engaged families at the laundromat?” So we started by creating these wash time and talk time posters and tip sheets, and we sent them through the Coin Laundry Association to 5,000 laundromats across the country. And we actually expanded that work, and now we’re creating these literacy corners in laundromats in New York City that look like almost these little mini versions of a preschool in a corner.

There’s the ABC mat and a bookshelf with children’s books and puppets and ABC magnets. And what we’re trying to do is actually when parents have that time when their laundry is in the washing machine to actively engage in early literacy activities with their children in these reading corners. And we’re doing a study of it right now with NYU.

Early Learning Nation: That’s really wonderful, because as to all of our regret, bookstores and places where you might think on a Saturday you could take a kid for 30 minutes, as those go away, one great to find other places but two, as you’re pointing out, this is where the parents need to be to get the wash done.

Patti Miller: That’s right. And what we also know about a lot of young families in this country is they lack access to children’s books. And in fact for a middle class family, a home library has about 14 books. In a low-income neighborhood in the United States, it’s one book for every 300 children. And in fact, JetBlue did a study and found that in Anacostia outside of Washington DC it was one book for every 800 children. So through the course of Too Small to Fail we’ve distributed almost a million children’s books so far. And that’s through Laundromats, diaper banks, playgrounds, you name it, where parents are, we’re there to deliver it.

Early Learning Nation: It’s a great point of view. It’s feeling like you almost look at any place as a potential distribution channel, if you will.

Early Learning Nation: I wrote down the list – the incredible list of people that you work with to reach parents: Pediatricians, hospitals, faith-based leaders, community-based organizations, businesses, entertainment industry leaders and others. How important is that network for you?

Patti Miller: It’s essential. It’s critical. This is really about how the work gets done. I mean, Too Small to Fail literally is very aptly named because we literally are too small to fail. We’re talking about six people. And so this doesn’t work without amazing partners across the country, and that means partners across sectors. So when we think about the entertainment industry, we know all of us love our favorite television shows. And we thought, “Well, what if we incorporated content about the importance of talking, reading, and singing in popular television shows?” So 14 television shows from Orange is the New Black to Law and Order SVU to Days of Our Lives to last week, How to Get Away with Murder have all incorporated content into their storylines.

Early Learning Nation: That’s funny, because I was going to say, I watch Game of Thrones. I’m not sure how you’re going to work it in there. But you probably could figure it out.

Patti Miller: And they have found really unique and creative ways to organically integrate content. We have a major campaign on Univision to reach Hispanic parents. Including we just created a five-part telenovela that’s taking place in an early childhood center. So while there’s a lot of drama going on with the characters there’s an opportunity to talk about early brain and language development.

Early Learning Nation: I want to just close by asking you about your cities strategy, Tulsa, Oakland, Miami, Minneapolis. How do you identify these communities, and no pressure, do you have plans to reach-

Patti Miller: So when we launched our city strategy, we launched in Tulsa and Oakland, and those were our pilot sites. The strategy really thinks about three components in a community. One is who is the trusted messenger in that community? So in Oakland it was pediatricians. In Tulsa, it was pediatricians as well as pastors of churches. So who do parents trust to get information and resources? And then we think about high-quality tools. So we have a Talking is Teaching tote bag with children’s books and a parent guide we created with Sesame Street and children’s clothes, onesies and t-shirts and baby blankets that prompt parents with the prompts actually on the materials and information on our text message program. And we distribute those through our trusted messengers and communities.

And then the final component is reinforcing the messages throughout the community, so billboards, bus messages, we were on every single bus in Tulsa with messages, TV and radio. So trying to reinforce the message that parents are getting from their trusted messengers. Oakland and Tulsa were phenomenal pilot sites. And from that work we actually created a toolkit for communities on how they could create their own campaigns. And we held a conference for cities across the country and said, “All of this is open source. All of this is available for free. We’re happy to provide technical assistance.” We now have 18 communities across the country that have Talking is Teaching campaigns.

We launch this summer in New Orleans at the children’s hospital there. Two weeks ago we were out at San Francisco General Hospital, which also has a campaign. We just did an evaluation of their work with pediatricians, and it found that 80% of parents were talking, reading, and singing more after this intervention with pediatricians. We’ll soon be launching in Detroit as well and two or three more cities to come in 2019.

Early Learning Nation: That’s terrific. And trust and trusted messenger, key themes. And it just it makes sense. That’s how to reach people is through individuals whom they trust.

Patti Miller: That’s absolutely right. We know that there are certain people in parent’s lives that they trust implicitly like their pediatrician or their pastor or their nurse or home visitor. So we think those are wonderful opportunities and great channels to reach parents with tools so that they can actively engage with their young children.

Patti Miller: Thanks for having me.