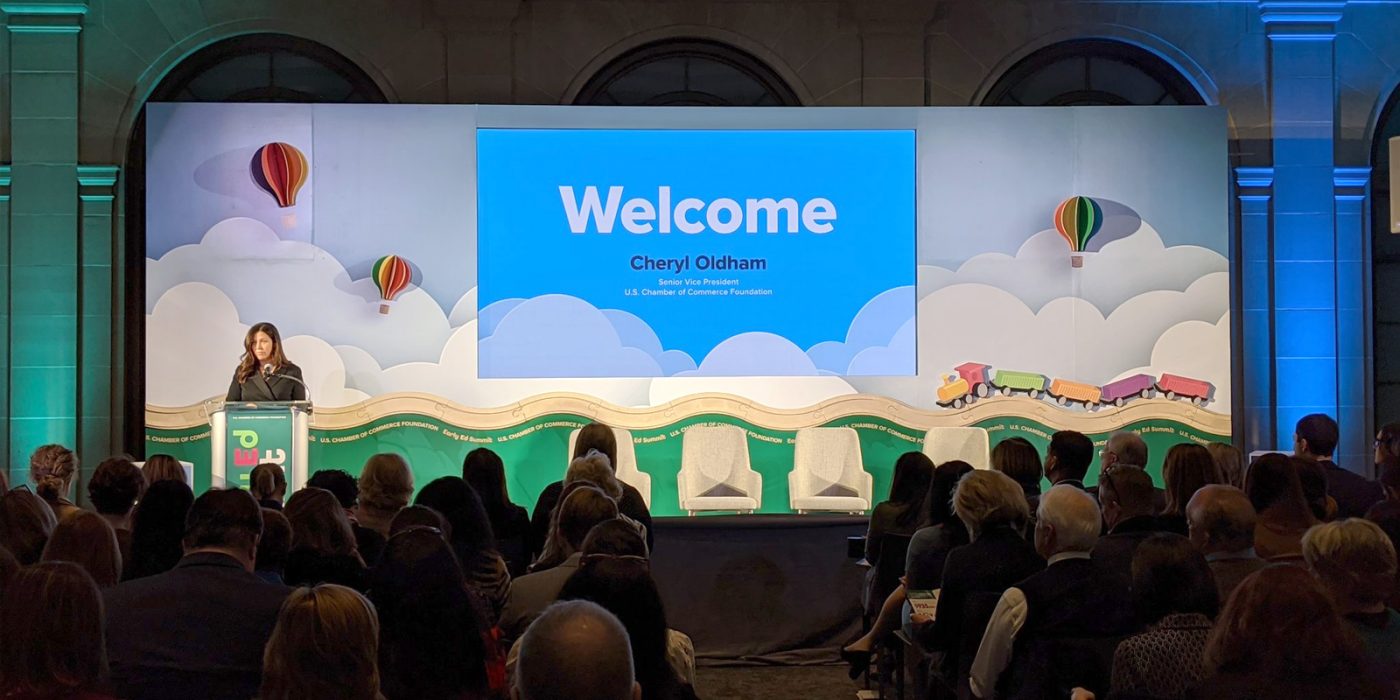 On February 28, the U.S. Chamber of Commerce held a summit for early education advocates and professionals, highlighting the work being done in Iowa, Idaho, Pennsylvania, and Mississippi. The overall mood might be described as realistically optimistic. Panelists recognize the great challenges ahead (look for #UntappedPotential on social media), but the involvement of the Chamber and the business community has brought a new energy to the dialogue.

Here’s a rundown of some of the most powerful lessons we heard at the summit.

1. Iowa. This is the state with the highest rate of female participation in the workforce. A lot of those workers are moms, and historically low unemployment rates mean that companies are competing for talent. On-site daycare is one way to develop a competitive edge. Josh Laraby, Executive Director, Fairfield Economic Development Association, made it clear that early education is simultaneously a workforce issue, a business issue, and a local infrastructure issue. Read the Chamber’s analysis of the $1 billion opportunity in Iowa.

2. Idaho. In a state that produces potato chips and computer chips—thanks to Alex Labeau, President, Idaho Association of Commerce and Industry, for that memorable formulation—attracting new businesses is a top priority. Beth Oppenheimer, Executive Director, Idaho Association for the Education of Young Children, lamented her state’s lack of public investment in early education but has found that the business community’s engagement in the issue is starting to change the culture and the conversation. Read the Chamber’s analysis of the $500 million opportunity in Idaho.

3. Mississippi. “All data is local,” declared Linda Southward, Executive Director, Children’s Foundation of Mississippi. Collecting and presenting relevant local data matters for persuading business leaders. One particular struggle in this state is the number of parents who want to improve their career prospects through post-secondary education. There’s a concerted effort for colleges to collaborate with the business community to accommodate the needs of these student-parents. Read the Chamber’s analysis of the $650 million opportunity in Mississippi.

4. Pennsylvania. This state demonstrated that changing hearts and minds depends on introducing policymakers to real people. Cara Moody, a restaurant worker, brought her young son to the summit. While he contentedly played with a model train set, she described a low point in her life when she was crying in the playground because she couldn’t find a viable care option for her night shifts. One of the moms introduced her to Lesely Crawford, owner and director of ABK Learning & Development Center, which operates around the clock, and now she’s able to keep her job and, just as important, the network of colleagues who have stuck with her through thick and thin. Read the Chamber’s analysis of the $3 billion opportunity in Pennsylvania.

5. Sesame Street. It’s not a state, it’s a state of mind. Jeanette Betancourt, Senior Vice President, U.S. Social Impact, Sesame Workshop, inspired the summit with her perspective on what it takes to help our kids become smarter, stronger, and kinder. She emphasized the value of the “circle of care”—the network that supports kids beyond their immediate families. According to Dr. Betancourt, technology will inevitably be a part of the solution, which is why the Sesame Workshop is constantly researching new platforms, including virtual reality, to engage kids and adults.

Each of the four state chambers of commerce, with the support of their early education partners, will host events across their state to share data and to educate key stakeholders on the impact of childcare breakdowns.