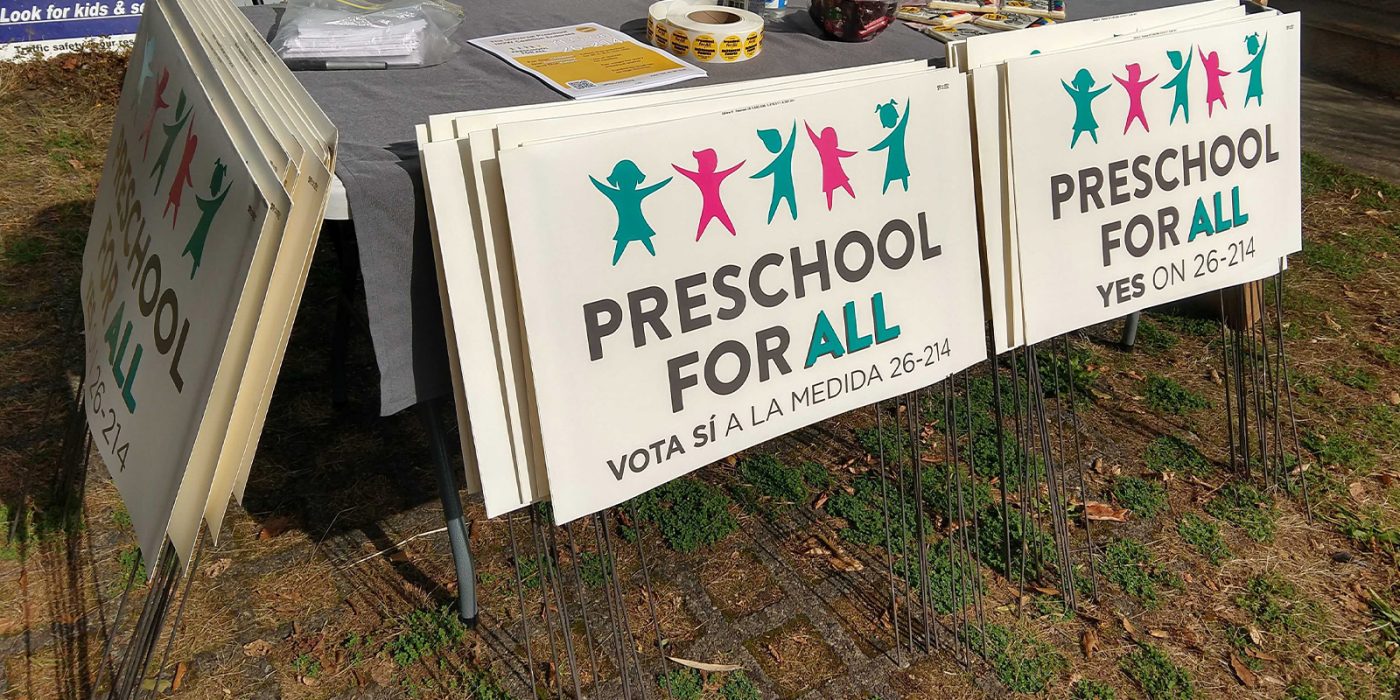 In this two-part series, Elliot Haspel explores how one Oregon region mobilized to generate an innovative, next-generation plan for universal pre-K (Part I); and delves into the parent-driven origins of the Preschool For All taskforce, along with a deeper policy dive (Part II).

Part I: The Campaign

This was the challenge in June put before community organizers in Multnomah County, Oregon (a region of 800,000 residents centered around Portland) seeking to get their universal preschool measure on November’s ballot.

The Preschool For All campaign (a merger of two distinct efforts, one originally known as Preschool For All, the other known as Universal Preschool NOW, or UPNOW!) is a game-changer when it comes to how communities in the United States should think about running early care and education efforts. As someone who is more skeptical than most about universal pre-K (the product often underwhelms relative to the promises), I am thrilled by this innovative, next-generation plan. It should become the standard against which all other universal pre-K campaigns are judged.

How did they do it? The lessons can be summed up in three interconnected buckets: an incredibly strong, bold plan; a high degree of community involvement and community organizing mastery; and thoughtful, targeted messaging.

The Strength of the Plan

How did they do it? The lessons can be summed up in three interconnected buckets: an incredibly strong, bold plan; a high degree of community involvement and community organizing mastery; and thoughtful, targeted messaging.
It’s worth pausing for a moment to sit with just how much money that is for an early childhood education program. The entire state of Virginia, with 8.5 million residents — an order of magnitude larger than Multnomah — spends only $186 million on child care and pre-K combined, and Virginia is fairly average. Similarly, other local ballot initiatives tend to have their sights set far lower: St. Louis’ proposed property tax increase, reasonable as it may be, would raise only $2.3 million annually. In an interview, UPNOW! chief petitioner Sahar Muranovic credited the funding design as a strength, noting the power of a “funding mechanism that is effective, that is sustainable, that is not going to affect [the taxation of] over 92 percent of people in any shape or form.”

Indeed, the fact that the Multnomah plan raises so much money is not merely impressive for the number of zeroes. The revenue powers aspects of the plan which promise big impacts and have made it so attractive to voters. It is truly universal, offering six hours a day of free care and education to every 3- and 4-year-old (with four extra hours of before- and after-care, free for both lower-income and many middle-income residents), all while raising educator wages to $18 an hour and providing quality supports. It doesn’t feel like a Band-Aid, it feels like a solution.

The universality is also worth zooming in on, as the organizers had to wrestle with the age-old question of targeted vs. universal provision (this was one of the main points of merger negotiation between the two efforts). UPNOW! organizer Emily von W. Gilbert said in an interview, “it was really important to build something that was universal because it places the stake with everybody, so that you can’t just whittle away at it when nobody’s looking anymore.” Gilbert added that if Oregon’s state pre-K program kept getting funded at its historical level of incremental increases, “today’s preschoolers are going to be dead by the time we approach universality.”

To vet the plan, economists and other policy experts were brought in early; at this juncture, the plan has been endorsed by 14 economists, including no less an authority than Nobel Prize-winning economist Joseph Stiglitz. As Willamette Week reports: “In their [ballot] argument, the economists say tuition-free preschool programs ‘are cost-effective, since all children gain and children from less advantaged families gain the most and gain more than in programs targeting only children from families with low incomes.’ They say such programs can reduce poverty and racial disparities, benefiting marginalized communities the most, and provide living wages for teachers.”

As mentioned, the Preschool For All campaign is actually a merger of two separate efforts. The Preschool For All Taskforce, led at its core by a Parent Accountability Council made up of roughly 40 parents of color, pursued a multi-year, community-led effort to design the bones of the plan (much more on that endeavor in Part II of this series). A County Commissioner then came on board as a champion who legislatively moved forward a ballot measure.

Meanwhile, UPNOW!, led by community organizers, pursued the ballot signatures and the more ambitious aspects of the plan that were adopted in the merger. The ability to gather over 32,000 signatures in such a short time, under brutal conditions, while crowdsourcing all of their funding, speaks to the fact that UPNOW! was stepping forward not with the domain-specific knowledge of early childhood advocates, but with mastery over community organizing strategies and tactics.

The UPNOW! organizing strategy had three main prongs: organizing parents, providers and practitioners. But their success spread out even beyond these most impacted stakeholders. By using strong, simple messaging (more on this below) and the power of networking, organizers ended up recruiting everyone from healthcare workers to yoga teachers. In the end, they had 500 volunteers fanning out to gather signatures, many of whom had deep activist networks from the summer’s racial justice protests and other grassroots organizing efforts.

Between the Preschool For All Taskforce and UPNOW!, the campaign has assembled a truly impressive coalition of supporters, combining the grassroots and the grasstops. Endorsers include not only local officials, but Oregon Governor Kate Brown and two area congresspeople. Although contexts differ, it’s hard not to contrast the broad-based appeal of the Multnomah campaign with a failed preschool campaign like last year’s sales tax attempt in Kansas City which was felled by conflicts among would-be supporters.

The Power of Strong Messaging

While early childhood advocates have a tendency to want to talk about preschool for its (tremendous!) early learning benefits, the campaign wisely targeted messages even for those who are less activated by brain development arguments. Organizers touched on intersecting inequities that let them get even non-parents deeply engaged; in a sense, there was an entry point for everyone. In fact, the entry point for UPNOW! organizers was not even so much about pre-K at the beginning, but instead about finding a vector to attack income inequality.

Tailored messaging included feminist arguments around the impact on working mothers; anti-poverty arguments around the fact that preschool costs were the equivalent of rent costs; worker’s rights arguments around helping early childhood educators realize a living wage; and even criminal justice arguments, as the plan bans the suspension or expulsion of preschool children, often the first step on the school-to-prison pipeline.

Gilbert explained that the messaging was important because “you have to be attentive to what grabs people. The more technocratic and wonky you get, you lose people. You have to be able to explain things very simply. Many non-parents don’t understand that preschool costs money, [so] you have to explain it like ‘isn’t it weird that you have to pay for preschool and early childhood education until Kindergarten where you can just drop off your kids? Why is that? Why can’t we have it start earlier?”

The campaign also got creative. A local bakery, Unicorn Bake Shop, started offering a “universal preschool cookie” ($4 apiece, $2 of which went to the campaign), which were so popular they sold out.

There might be a temptation to hand-wave this campaign away as an artifact of kooky liberal Portland. Resist that temptation. The bones of what the merged campaign has done are applicable anywhere:

They have also managed to elevate the issue of early care and education and build enormous public awareness in ways that will enable them to pursue other early childhood measures in the future, such as one focused on infants and toddlers. A rural community in a red state may not be primed to raise hundreds of millions of dollars, but it can certainly use these lessons to generate a big impact.

It remains to be seen if voters will approve the measure on November 3rd, but signs are encouraging. If Multnomah’s Preschool For All becomes a reality (and, honestly, even if it fails), it has broken new, fruitful ground. We shouldn’t go back.

COMING UP IN PART II: The parent-driven origins of the Preschool For All taskforce, and a deeper policy dive