Operating All the Levers 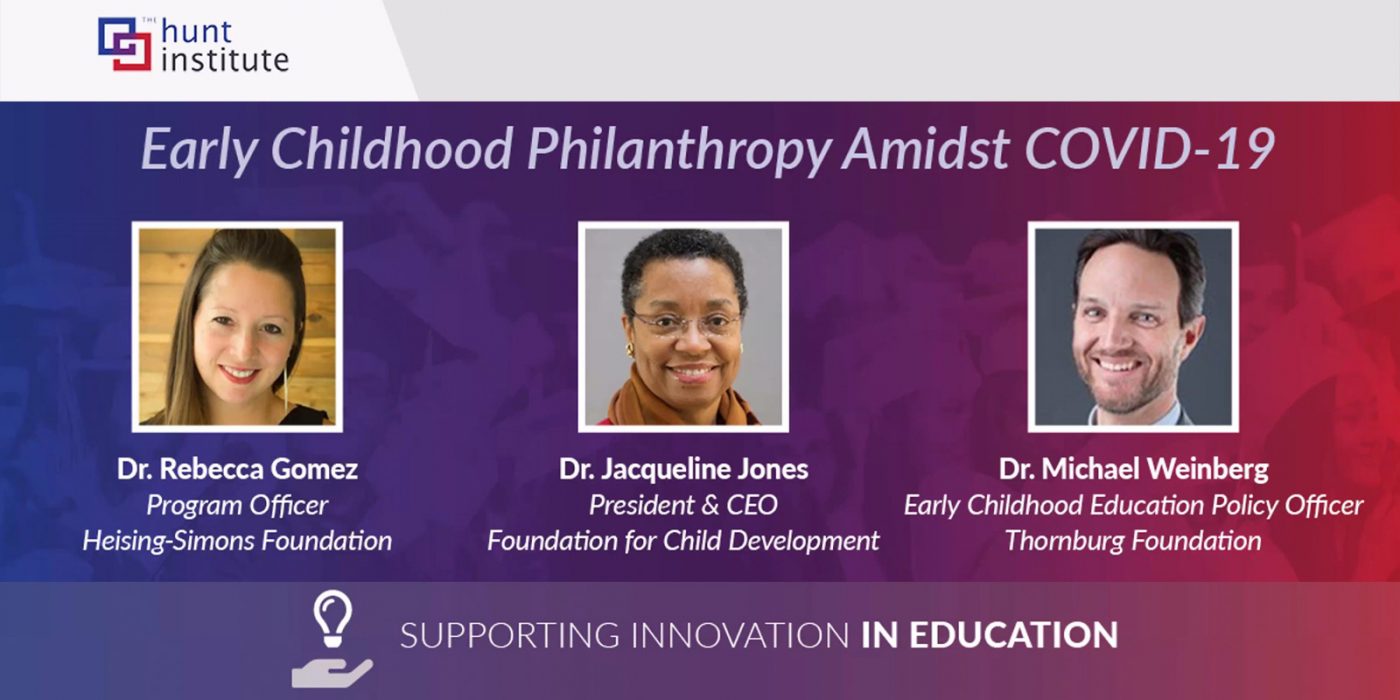 The latest in The Hunt Institute’s series of Zoom conversations with foundation leaders took place on October 27. Dr. Dan Wuori, Hunt’s director of Early Learning, facilitated a wide-ranging dialogue with:

Prior coverage
👉 Takeaways from the September 1 conversation

👉 Takeaways from the July 21 conversation

👉 Takeaways from the June 16 conversation

Here are our takeaways from the October 27 conversation:

1. Context is everything. All of the panelists agreed that this is no time for business as usual in philanthropic giving. The interweaving of the pandemic, the continuing relevance of the Black Lives Matter movement and a divisive political landscape deny foundations the luxury of making grants according to pre-established guidelines. Program officers have to acknowledge the systems buffeting their area of focus. Dr. Weinberg cited the fluctuation of oil prices that determine the state’s early education budget as a reason for establishing the Early Childhood Trust Fund. Grassroots activism and public financing also come into the picture. The eligibility of Medicaid funding for home visitation and the psychosocial implications of a stepped-up deportation policy were among the many complexities informing the work of foundation professionals.

2. Foundations are adapting alongside their grantees. Like many foundations, COVID has pushed Heising-Simons to switch many of their program-specific grants to general support, and they are waiving such requirements as final reports. It’s part of a general shift to what Dr. Gomez called “trust-based philanthropy,” acknowledging that the sector “has a lot of work to do on itself.” Picking up on these remarks, Dr. Weinberg wondered aloud whether “some of the changes might stick,” forever altering the dynamic between foundations and grantees. He referred to the new paradigm as “adaptive grant making.” The Thornburg Foundation made more than 60 emergency grants in the first months of the crisis and discovered, “We aren’t great at getting money directly to child care providers.” Intermediary organizations have proved invaluable. Dr. Jones indicated that the pandemic has caused her organization to look “both inward and outward.” Noting the 40-year age range on her staff, she said a virtual book club has sparked fresh dialogue. (The reading list has included Cornel West’s Race Matters, Robin DiAngelo’s White Fragility and Ta-Nehisi Coates’s Between the World and Me.) Regular communication with the board of directors has also been essential for steadying the organizational ship in turbulent times.

3. Research is a lever. In the first weeks of the COVID-19 pandemic, Heising-Simons joined other funders in supporting a Yale University Child Care Center study to better understand and evaluate infection rates in child care centers. Jones stressed that her organization had no interest in “research for research’s sake,” but rather in knowledge that could be applied in the real world. “We ask policy people, ‘What do you need to know in order to make decisions?’” she noted. Incorporating the voices of educators and families helps to bridge the gap between research and policy and can contribute to continuous quality improvement. The Foundation for Child Development also sponsors a Young Scholars Program for early career researchers.

4. The sector is focusing more on the child care workforce. In the 1990s and early 2000s, philanthropists and foundations relentlessly deployed metrics to establish whether they were getting sufficient return on their financial investments. Student testing increased (even among very young children), and teachers and schools struggled to get good “grades” from their benefactors. The lives of the workforce—mostly female, mostly people of color—generally did not enter into the equation. Dr. Gomez recalled her time as an early childhood teacher, living with her parents to make it on $8 an hour. She sees the philanthropic sector playing a larger part in advocating for a living wage or even parity with K-12 teachers. Impact still matters of course, but the recognition is growing that it cannot be attained without the workforce that makes it happen.