Top Takeaways from the Hunt Institute Conversation: The Science Is Clear. Let’s Make It Official through Policy 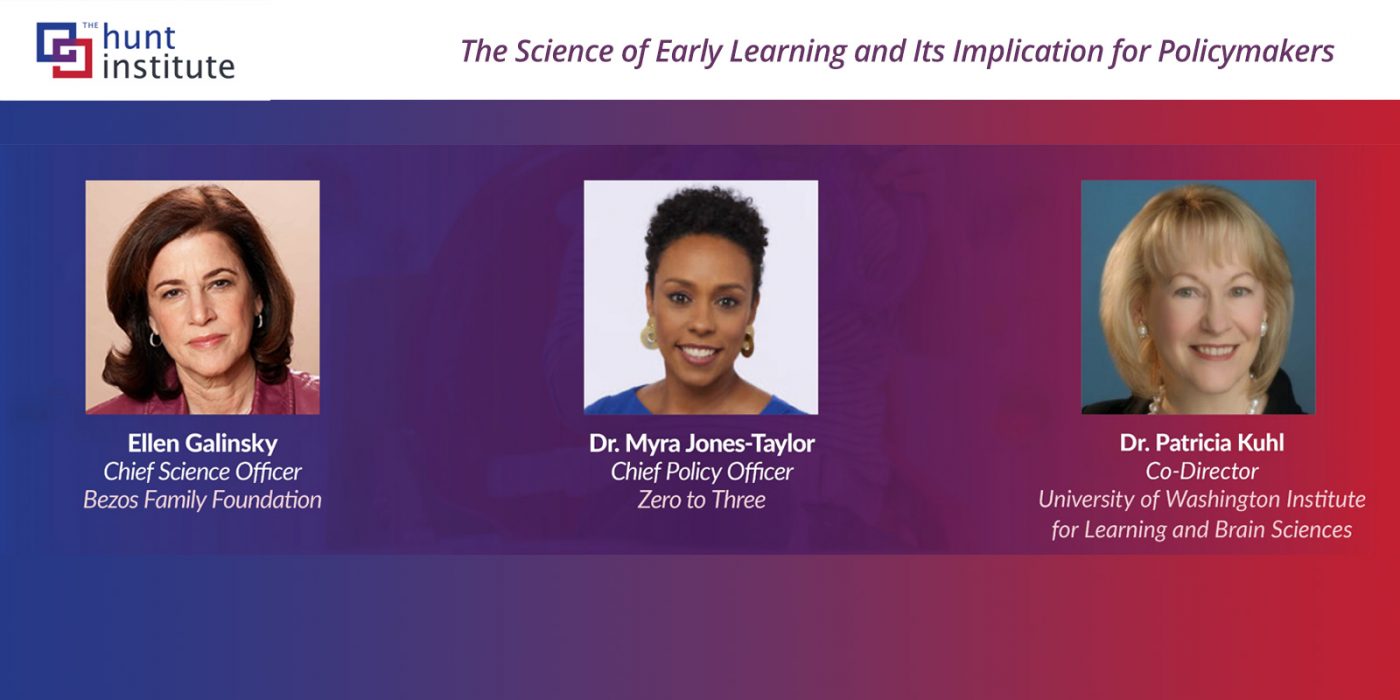 On January 7, The Hunt Institute hosted a conversation to discuss the growing science of early learning and its implications for policymakers.

Javaid Siddiqi, President & CEO at the Institute, welcomed the following panelists. Dan Wuori, Director of Early Learning served as moderator for the discussion.

Below are our top four takeaways from the conversation.

1. Yes, quality early childhood education does lead to more successful lives as adults. The National Academy of Sciences recently released the report:The Science Behind It, which confirms this connection between early education and outcomes later in life. Dr. Kuhl said the significance of this report is twofold: One, the data are sufficient to answer the question of how early education drives adult success, and two, it’s worth the time and effort to answer.

A short film highlighting the National Academies report titled Starting at Zero: Reimagining Education in America will be released in the coming weeks.

👉 Read our feature on the documentary

2. Quality structures and relationships are needed for better outcomes. “For so many years,” Galinsky said, “we haven’t really known what it was about quality, what were the ingredients of quality that really made a difference.” The Academy was finally able to define it in a meaningful and measurable way.

Along with intentionality, Galinsky listed taking the child’s perspective, prompting curiosity and having an opportunity mindset as qualities of a framework that leads to successful relationship building. Her colleagues and partners at Mind in the Making go in-depth about building these essential life-skills early on.

3. Quality care yields long-term benefits. These experiences early in life build not just children who learn in school, but people who are more successful in life in terms of health and behavior. “If the brain is in a sensitive period where experience is directly affecting the architecture of the brain, then good experience grows that brain in positive ways,” Dr. Kuhl said. “Poor experiences, bad experiences, adversity, lead you in the opposite direction.”

Unfortunately, not all children are exposed to the same level of quality care. Access and affordability are persistent barriers. “This unequal playing field disallows this experience that we know is valuable for a certain percentage of the children, and that’s got to be addressed,” Dr. Kuhl said.

4. Increased investments are needed. “As a nation, we are not emphasizing this enough,” Dr. Jones-Taylor explained. “We are not creating enough policies to support what we know; the science is telling us what young children need.”

For instance, only 30 states have adopted an infant-toddler credential, which recognizes a provider’s achievement of attaining information on brain science and his or her intention to apply it in their daily work. “This should be the ground floor,” Dr. Jones-Taylor said, “We need to make sure that early educators and caregivers are prepared and trained and have all of the support so they can deliver on the promise of this research.”