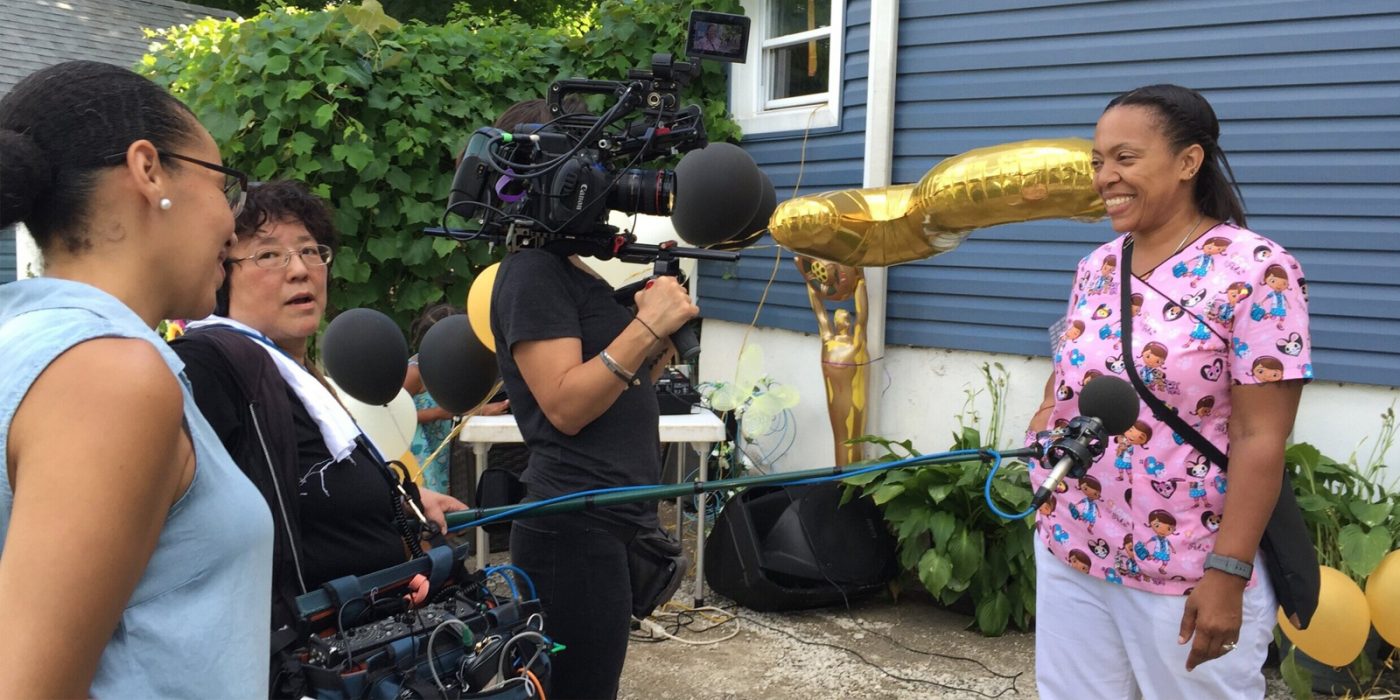 Early on in the recently released documentary Through The Night, Deloris “Nunu” Hogan circles up the group of children under her care. With heads both short and tall surrounding her, the owner of Dee’s Tots Childcare in New Rochelle, NY, asks: “Do we love each other?”

“Yes,” the children chorus back.

Love is at the heart of Through The Night, a revealing and intimate look at family child care, a frequently overlooked but essential component of the child care system. The documentary takes viewers through the daily routines of Dee’s Tots, where Nunu and her husband Patrick work with children ranging from babies to one youth about to age out of subsidy eligibility upon turning thirteen. The title refers to the fact that Dee’s is one of a growing number of 24-hour child care programs that serve children whose parent(s) work overnight; journalist Alissa Quart has described this phenomenon as “extreme [child]care.”

Through The Night illustrates the limitations with applying public school frames to child care. While certain K-12 elements are applicable ideals—publicly funded, free to all, decently (though still under-) compensated practitioners—Nunu’s house looks nothing like a classroom.

Let’s be clear: There is inarguably a specialized skill at work here, complex and valuable labor that is not easily replicated. Education is also certainly happening, as Nunu and Patrick ensure their school-aged charges complete their homework, while the little ones are frequently seen with books. But the interactions and informality border on familial, almost a form of village alloparenting. One can understand why some parents feel more comfortable with family child care over other settings.

There are also relational advantages to family child care that are too often left unremarked. At a local parade, Nunu runs into a former attendee, now a young adult. The young woman appears to be having a hard time: “I need to talk to you,” she tells Nunu, repeating herself. “I really need to talk to you.” How do you quantify the existence of that support, so many years after the direct caregiving relationship ended? It doesn’t show up on our traditional quality measures, but it’s arguably far more life changing than any shiny classroom corner. Harvard’s Center for the Developing Child is clear that damaging “toxic stress” is defined by the “prolonged activation of stress response systems in the absence of protective relationships.” The Nunu’s of the world are protective relationships.

None of this suggests that there’s anything wrong with the relatively more staid world of formal child care centers, where children tend to stay in narrower age bands and move from one teacher to another as they grow older. That model can and does serve many children well (I mean this: my youngest child attends a center where she’s thriving). What Through The Night confirms, then, is that we should be cultivating a pluralistic child care system, one that empowers parents to select the type of care that works best for them and their children.

Yet, worrisomely, family child care programs like Nunu’s are disappearing at rapid rates: nearly half (!) of the supply of these programs disappeared just between 2005 and 2017, the latest year for which data is available. While there are multiple reasons why, the two primary driving factors seem to be persistently low compensation and the fact that many providers are aging out without a supply of younger providers waiting to take their place. As Nunu puts it, “the state doesn’t give much” when it comes to child care subsidy, while the work hours are nearly nonstop: at more than one point in the movie, I wondered aloud when she ever found the time to sleep. And indeed, sadly, Nunu—who has been running Dee’s for more than 20 years—suffers a serious medical episode over the course of the documentary’s filming.

Though not its main thrust, the other issue Through The Night reveals is how badly our modern economy is harming families. One single mother who uses Nunu’s services works multiple jobs to provide for her children—exhausting herself in the process—yet none of the jobs will give her enough hours to allow her to qualify for benefits like health insurance. She goes to apply for a job at, of all places, a local child care center, and the center director almost apologetically shares that the starting wage is $11.50 an hour. While this is miserably low anywhere, New Rochelle, located in Westchester County, has a cost of living index more than 50% above the national average. For anyone who thinks parents should be able to spend a reasonable amount of quality time with their children, it’s viscerally clear from stories like these that our low wages and job-linked benefits are working against the goal of healthy families.

Through The Night will leave you with a new appreciation for family child care (and gratitude for efforts like the Home Grown collaborative working to bolster this type of care so it is sustainable).

It should also leave no doubt that care and relationships are the foundation of all human development, and that we should cultivate a country where those values, not money culture, lead us forward. As Nunu said in a virtual panel discussion about the film, when asked about her self-care: “the way I take care of myself is through my kids … I couldn’t see myself not being here for them.”