The United States Used to Have Universal Child Care–Will We Do It Again? 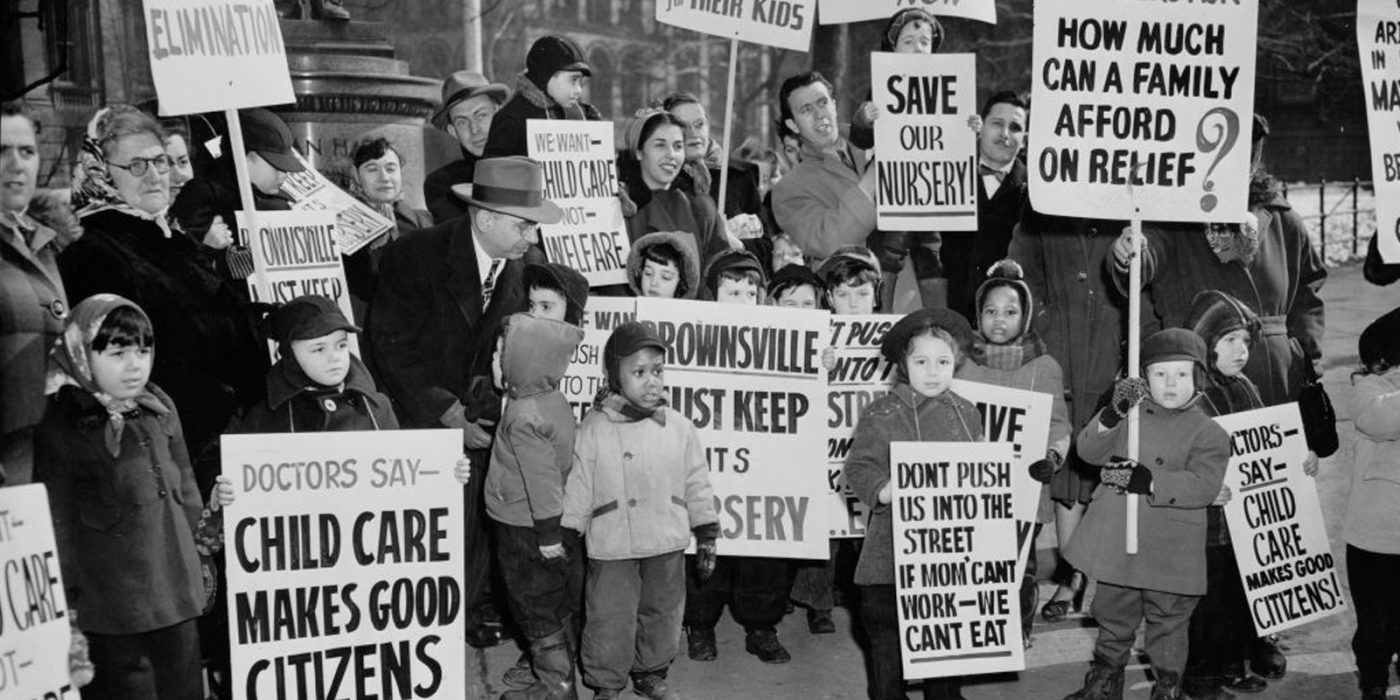 Universal child care is getting a turn in the spotlight. President Joe Biden has proposed universal preschool for all American children ages three and four in his American Families Plan, as well as big investments in child care for younger ones. Meanwhile, Senator Elizabeth Warren recently reintroduced her universal child care legislation with new cosponsor Representative Mondaire Jones.

But it might surprise many to hear that universal child care was once as American as apple pie. The country in fact had its own system in the 1940s, and was a hair’s breadth away from creating a permanent one in the 1970s. But much of that history has been lost.

The first taste the country got of universal child care was during World War II. While the New Deal-era Works Progress Administration created emergency nursery schools, they were meant as an employment program for unemployed teachers, not as a mechanism to free women to work outside the home. Then the country went to war. Most young men went abroad to fight, and yet here at home domestic production ramped up dramatically to meet wartime needs for guns and planes.

That left the government in a bind. Only about 15 percent of married women were in the labor force in 1940. But with so few men at home, it needed women to enter factories en masse to keep goods flowing. There were only so few childless women, and as mothers were urged to take factory jobs, horror stories abounded. Newspapers ran stories of children locked in cars near factories, left in movie theaters or chained to trailer homes. As one lawmaker put it at the time, “You cannot have a contented mother working in a war factory if she is worrying about her children, and you cannot have children running wild in the streets without a bad effect on the coming generation.”

Congress had passed the Lanham Act in 1940 to issue funds for wartime infrastructure, and the language was interpreted so that the money could also be used to build, staff and run a national network of child care centers. The government “wanted bombers and naval vessels, and was willing to arrange for anyone willing to make them to have the care infrastructure necessary to do it,” Roosevelt Institute Director Mike Konczal writes in Freedom from the Market: America’s Fight to Liberate Itself from the Grip of the Invisible Hand.

Parents were charged a flat fee of the equivalent of about $10 a day today, and there was no eligibility threshold—anyone, whether employed or not, low-income or middle-class, could use them. They were open for 12 hours of care each day, year round. The quality of care was also high, since elevated unemployment made it easy for the government to hire highly qualified teachers, and the target child-to-teacher ratio was 10 to 1. At the height of the program, nearly 130,000 children were receiving care in about 3,100 centers nationwide. The program ran from 1943 to 1946 and served an estimated 600,000 kids.

The centers had an enormous impact on the women who used them. A study found that each extra dollar of spending on the programs increased women’s employment rate by 0.1 percentage points and led them to work more each week. The number of women in the labor force grew by more than half between 1940 and 1945; the number of working women grew from 12 million to 18.6 million, about three-quarters of whom were married. The women who used them loved them. Eighty-one percent had a favorable opinion of them, and all of them said their kids enjoyed the care.

When the war ended, President Harry Truman moved to end the program as well. The child care centers didn’t just fade away quietly, however. Advocates waged a ferocious fight to keep them permanently. National education, health and welfare organizations pressured Truman not to wind them down. Thousands of women who had made use of the centers protested, picketed, lobbied, made phone calls and sent letters to the government to demand they stay open. A group of 150 held a sit in at Cleveland’s City Hall. They secured a temporary extension, but when it ended they went back and brought their children with them. A coalition of parents, teachers, women’s groups and church groups formed in California to lobby the government and was successful in extending the centers past the end of the war.

Truman did bend slightly to these demands and agreed to keep the programs open for another six months as the wartime effort dialed down. But by and large, Lanham child care centers ended when the war did.

Our lack of a public infrastructure to solve what is, in fact, a shared problem has reached a crisis point, with families spending more on child care than what they spend on food or even housing.

That’s not the end of the story, however. By the 1960s, women had begun moving into paid work in high numbers, while at the same time President Lyndon Johnson’s Great Society had reimagined the role government played in providing public services. Child care felt to many like a logical next step, and not just to Democrats. Congress began drafting legislation to create a national network of child care centers in the late 1960s with the involvement of plenty of moderate Republicans. The legislation would have money to local communities to create a network of child care centers that provided it to everyone who needed it on a sliding scale. It also included rigorous quality standards.

It appeared all but destined to become law. Members of Congress from both parties passed the Comprehensive Child Development Act in 1971, sending it to President Richard Nixon’s desk, where everyone expected it would receive his signature. In his message to Congress in 1969, Nixon had pledged, “So critical is the matter of early growth that we must make a national commitment to providing all American children an opportunity for healthful and stimulating development during the first five years of life.” His administration had even helped to draft the bill. Everyone saw the issue as one that would win votes.

But a nascent culture war was brewing outside of Congress in which child care was being cast as Soviet-style child rearing, government mind control and a dangerous entitlement. Pat Buchanan, the president’s special adviser, advised Nixon to veto the bill, which he did, calling it “a long leap into the dark for the United States Government and the American people” and “the most radical piece of legislation” to emerge from that Congress and decrying the “family-weakening implications.” It would “commit the vast moral authority of the National Government to the side of communal approaches to child rearing over against the family-centered approach,” he said. Buchanan himself wrote much of the veto language.

The viciousness of that backlash sent the issue underground for many years. But that never kept women from entering the paid workforce, nor families from seeking out their own private solutions to child care. Our lack of a public infrastructure to solve what is, in fact, a shared problem has reached a crisis point, with families spending more on child care than what they spend on food or even housing. Many simply can’t find a good option. The country may very well be ready to give universal child care another try, this time for good.