Grandmothers: Beyond Babysitters, They’re the Bedrock of Human Evolution 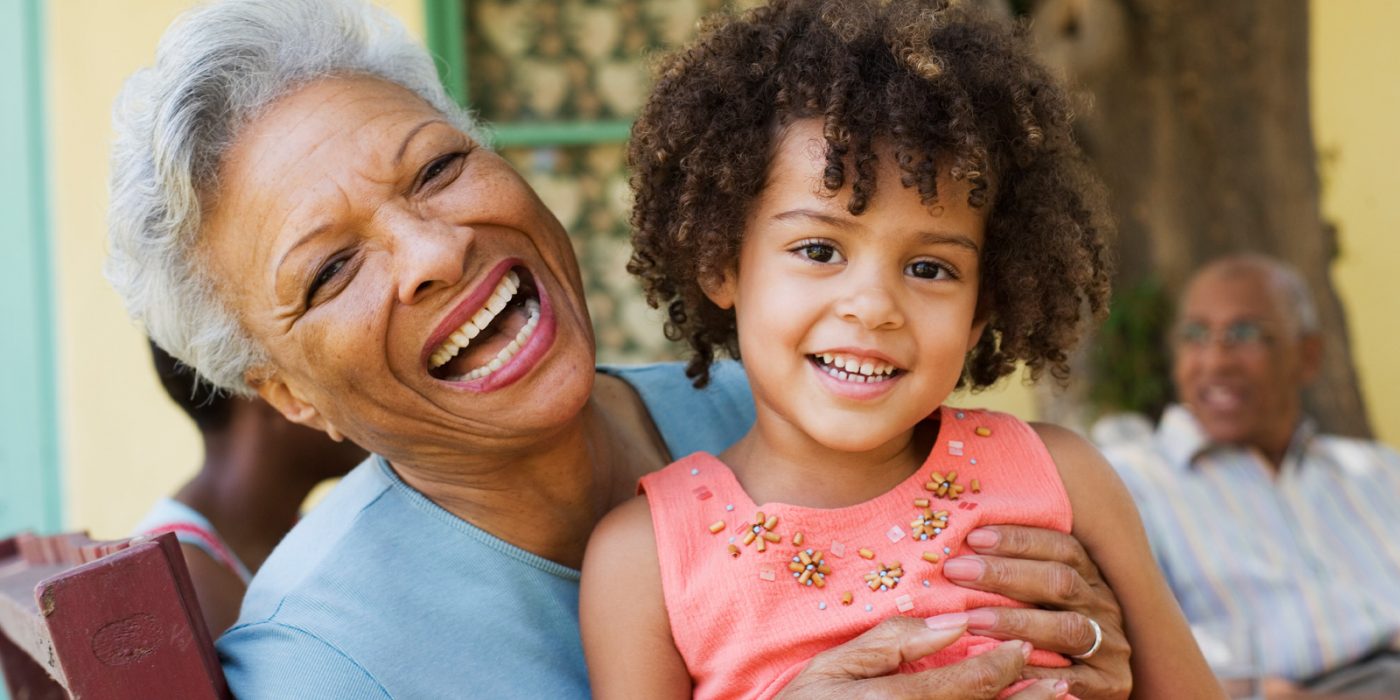 The Covid-19 pandemic has been a catastrophe that helped reveal some of the deepest fissures in the isolated nuclear family, upending the American archetype for family life—the “Ozzie and Harriet/Homer and Marge” model—and creating an almost unimaginable level of stress for working parents. We can’t go back to being foragers, but we can take a few pages from our prehistory to work out more social, workable models for the future.

In American society, as females become women of a certain age, they can begin to feel somewhat beside the point in a culture that hurries more easily than it breathes, and views getting older as either a medical situation or a symbol of defeat—having “given in” to aging.

If our society could create a better model for senescence, the new paradigm might look a lot like the very old one that distinguished our ancestors from their primate cousins and, according to anthropologist Dr. Kristen Hawkes, set us on the trajectory to becoming the kind of big-brained beings we are today. Grandmothers would be viewed not as backstop babysitters but as societal keystones.

And, as always has been the case, the greatest beneficiaries would be the children.

Hawkes, a professor at the University of Utah, worked her way into this “grandmother hypothesis”—that grandmothers, not mighty male hunters, gave humans our evolutionary edge on other primates—through studying societies that still hew to the hunter-gatherer ways that marked human prehistory. At first, she says, she didn’t question the established wisdom that men, the hunters in that equation, brought back huge animals that they had slain and provided the main nourishment for the womenfolk and children back home. The long-held bringing-home-the-bacon theory was that a male paired with a female by feeding her and their offspring, thus advancing his genetic lineage.

When Hawkes began observing the Aché people in eastern Paraguay, she experienced a series of Aha! moments in realizing that the men were spending 50 hours and more a week hunting—an “energetically expensive” thing to do. And despite being incredible hunters, they failed most days. When they did succeed in bringing down an animal, shares went to everybody, not just their individual families.

“We were able to observe, not only what everybody collected,” Hawkes says, “but whose stomachs it went into. Turns out, most things a man acquired went to others with no special share for his wife and kids. So that had me scratching my head a bit.”

Soon, another research opportunity arose—this time in East Africa as part of a three-person team that included her, archeologist James O’Connell and evolutionary anthropologist Nicholas Blurton-Jones—observing the Hadza people who have occupied essentially the same territory on the southern edge of the Serengeti for more than 130,000 years.

“The focus for me initially was, ‘Oh, cool! All those really big animals. We get to see what’s happening with those hunters,’” she says. And once again, the failure rates were noteworthy. “These guys have fully modern brains, just as smart as we are, and use powerful bows and arrows (which are recent in human experience). Yet, on average, a hunter fails 96 percent of his days. They go out every day, but a hunter’s chance of scoring a big animal is less than 5 percent.

“And I’m thinking, ‘Statistically, this just isn’t going to work.’”

Along the way, grandmothers became transmitters of culture and tradition, storytellers and historians, nurturing the voracious social appetite that, in this telling, evolved as a consequence of ancestral grandmothering.

The Hadzas’ gift to the researchers, Hawkes says, is that they were enormously generous and allowed the scientists to follow everyone around and observe every aspect of their lives. “I think being really interested in their story made us tolerable to them.”

As Hawkes was logging her observations, she saw the older women out all day, working in the sun, digging tubers, often with younger women and children in the party. Observing them over time, a big riddle about human beings began to make sense, she says.

In all other primates, females usually die before the end of their fertility; the difference is especially striking in our closest living relatives, the great apes, longest lived of all the nonhuman primates. In chimpanzees, female fertility ends at about the same age as it does in humans. But chimpanzees rarely live to the end of their fertility. Even in captivity, she says, it’s hard to keep a chimpanzee alive into their 40s.

Not so for humans. Women live for decades in their post-fertile stage and are more or less able to carry on with life. In foraging societies, a third of the adult women are usually past their childbearing years. What could explain that? Hawkes wondered.

The Hadza women digging tubers provided another of those Aha! moments: with Grandmom collecting those plant foods reliably every day to support the children who were no longer nursing, Mama could bring another baby into the family sooner. Gram’ wasn’t just nagging the kids to eat their vegetables, she was digging the nutrient- and energy-dense tubers that sustained them—and their kinfolk as well. The older women were subsidizing their daughters’ fertility.

“We were working with a small data set, but we could see that the amount of foraging a woman was doing was a good predictor of the weight gains of her kids. Little kids would try to dig, but they were little bitty and there’s no way they could acquire those foods at the rate they needed to grow. Their mother foraged to feed them, but when she had a new baby, she paid special attention to the newborn; and then the food link for the weaned kids was their grandmothers.

“If you’re a chimpanzee, you’re a working mom. You have to feed yourself, and you have that infant who depends on your milk. But with the soft fruits they rely on, a chimpanzee infant starts to feed itself while it’s still nursing and when it’s weaned, gets its own lunch.”

We have to reconstruct what happened with humans because we don’t have a time machine, but it appears that as ancient climate changes reduced the African forests, and ancestral hominids no longer had steady access to the berries and leaves that had formed their diet, they began taking advantage of savanna resources like hard-shelled nuts and plants that stored their energy underground as tubers or bulbs. For the first time, our ancestors could access more than enough food for their own consumption.

“The mothers began to wean infants long before the babies could begin to feed themselves, then have another child sooner,” Hawkes says. “Grandma’s reliable productivity would have made that possible; her support takes over from there.”

Hawkes collaborated with mathematical biologist Peter Kim of the University of Sydney and his post-docs and students on computer-simulations and other mathematical models to test the hypothesis, working out how longevity would evolve as females near the end of their own fertility subsidized their grandchildren. In the models, longevity increased, development took longer, and weaning was earlier as longer-lived grandmothers left more descendants.

As Cornell psychology professor Barbara Finlay and her colleagues demonstrated in their research on the evolution of mammalian brains, increased longevity extends the duration of brain development, which expands the brain’s size and results in the neocortex—the part of the brain believed to be where higher cognitive function originates—becoming an increasingly bigger portion of the brain. Over time, according to the grandmother hypothesis, our ancestral grandmothers’ economic productivity purchased this longevity.

Anthropologist Sarah Hrdy’s insights provide a crucial link in this story, Hawkes says. With multiple dependents, babies more effective at engaging attention and support from others would increase their own survival chances. With birth intervals shortening, attention to relationships and reputations became survival priorities for infants, priorities that persisted with continuing interdependence. Babies’ capacity for charming the socks off the adults who could feed them didn’t go away but continued into adulthood to become the “shared intentionality” that allows humans to collaborate and become the social creatures that we are.

The longevity resulting from grandmothers’ productivity also extended to males, which created more older males whose fertility did not wane at the same rate, raising the ratio of fertile males to fertile females. With more males competing for paternity, a male who did land a mate left more descendants by guarding his proprietary claim. Since successful guarding required the deference of others, males that displayed qualities that others admired earned respect, which paid off in more descendants. Again, social relationships took primacy.

Not all anthropologists agree with or support Hawkes’ grandmother hypothesis.

“I understand why people want the hunting hypothesis to be the story, but the data my collaborators and I have collected are just inconsistent with that (hunter) story,” Hawkes explains. “When we have a chance to look at these societies in which people are still foraging, the pieces begin to fall into place in a different way. If we look at our Hadza data, even in seasons when the hunters were most successful, there were still weeks where there’s no meat. For life histories to shift as they did in us, sustenance has to be something that’s reliable one day to the next over time.”

Though evolution never marches in a straight line, it isn’t a stretch to see that grandmothers’ contribution has been profound. They have not been teachers so much as doers, with the youngsters naturally joining in—the original “learning by doing” principle. Along the way grandmothers became transmitters of culture and tradition, storytellers and historians, nurturing the voracious social appetite that, in this telling, evolved as a consequence of ancestral grandmothering.

The most recent American archetype for family life, the “Ozzie and Harriet/Homer and Marge model,” Hawkes says, has upended all of that, and the Covid catastrophe helped reveal some of the deepest fissures in the isolated nuclear family, creating an almost unimaginable level of stress and overwhelm for working parents. We can’t go back to being foragers, she says, but we could take a few pages from our prehistory as we work out more social, workable models in the future.