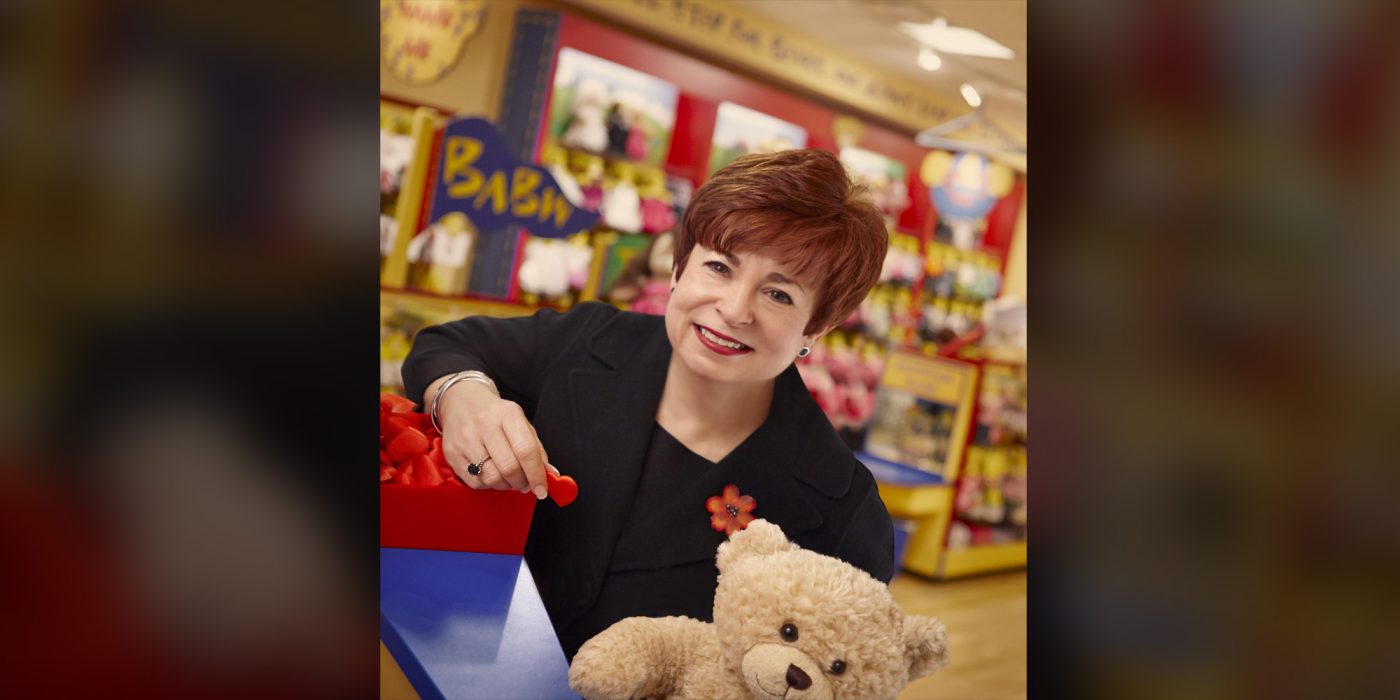 Maxine Clark, founder of Build-A-Bear Workshop and Chief Executive Bear through 2013, is co-chair of the ReadyNation CEO Task Force on Early Childhood and serves on numerous boards, including the local St. Louis regional board of Teach for America. We spoke about her business career and her continued commitment to the education of young children. She says, “I speak on college campuses all across the country and people bring their bears to my class, and they tell me their stories. And I feel so privileged. I believe that we’ve created a generation of makers who don’t want to buy a bear off-the-shelf anymore. Because they want to personalize it. It’s not so much that they want to make it from scratch; they want to make it theirs. We all want to do that.” (Note: My kid is 17 now, but they still have their Build-A-Bear bear. His name is Vanilla Bear.)

“This is why I’ve gotten involved in ReadyNation. Businesses need to be supportive. The workers are going to be more productive if their children are in a place where they’re safe and they’re learning. If you think those aren’t connected, you’re wrong.” — Maxine Clark, founder of Build-A-Bear Workshop, Chief Executive Bear through 2013, currently co-chair, ReadyNation CEO Task Force on Early Childhood

Highlights of our conversation:

The learning comes from the experience of making.

I created a canvas that the children and the people who work for me could add value to, and that’s really what education is. It doesn’t teach you everything; it just gives you a place where you can start from and make it better than the way you inherited it. That’s the human imagination.

There are so many implications for teaching.

Definitely. One time I visited a fifth-grade math class near the Build-A-Bear office. I brought bears, rulers, a measuring case and clothes. The students were helping me design clothes for the bear, measuring how big their feet were and how big the shoes would be.

Those hands-on experiences are important for every age.

I recently went along on a field trip, or an experiential learning expedition, to a local early childhood center, whose students are three-, four- and five-year-olds. As a hands-on project they went to an area of St. Louis called the Delmar Loop and took pictures. The kids came back to school and recreated it all with cardboard and egg crates. I was at another school where they took an old refrigerator box and made a bank out of it. If the five-year-olds wanted crayons or paper, they had to go to the bank, and they had to pay for the supplies with their pretend money. And they had to get change. They were learning about money, about business and what things cost.

Did you always want to go into business?

When I graduated high school in 1967, I did not want to be anything that a traditional woman did. It was a time when anything was possible. People were rocketing to the moon, doing heart transplants and all kinds of seemingly impossible things. I always had this interest in technology and how things work, but I was never encouraged to be an electrical engineer or anything like that. Then I wanted to be a lawyer, a civil rights attorney who helped children, and families and persons of color to have everything that I had. In order to pay for law school, I got a job in retail. And I got so fascinated with it, because as a woman joining the workforce in the early 1970s, there was nothing for us.

Can you say more about that?

The shoes weren’t comfortable. The clothes weren’t made for working people, and I saw an opportunity. What if I could design and make products that could be for the new younger workforce, women who work? I was successful and decided that a career in retail was perfect for me.

How did you know business was the right path for you?

I imagine the business world wasn’t always welcoming of women back then.

Did I ever encounter discrimination? I did. But it made me try harder, and I learned more and did better. The May Department Stores Company bought Payless Shoes, and eventually I got to be the president of that company, but it wasn’t as creative and impactful as I thought it would be. I wanted to start my own business. I didn’t know exactly what it would be, but I knew it would be for children. I wanted to do something in retailing that taught somebody something, not just sold them something. And I landed on this idea that was nothing short of brilliant, because it was so obvious.

As a CEO, you could inspire people.

My mother had worked for Eleanor Roosevelt and later started a nonprofit school for children with Down’s syndrome. I wanted to change the world through being a successful capitalist.

How did you go about doing that?

I was the author of the culture. At the start, our board of directors comprised children ages five to about 12. I loved their questions. And one of our most valuable employees early on was a teacher who worked part-time for us.

Were you intentionally creating a family-friendly environment?

Many of my first employees had children. When school was out they sometimes came in and played, or they stuffed envelopes or colored or delivered mail, like I did when I went to my dad’s office. There were always bear clothes to organize. And we eventually allowed people to bring their dogs, too. On some days we had as many as 20 dogs!

Why is it important for companies to pay attention to their employees’ family needs?

This is why I’ve gotten involved in ReadyNation. Businesses need to be supportive. The workers are going to be more productive if their children are in a place where they’re safe and they’re learning. If you think those aren’t connected, you’re wrong. And especially now that the workforce is about 50% women. We have some responsibility to do this, even about things like where we locate our companies, so that people can get to work easily, get home easily. All these things play a part in how people decide where they’re going to work.

How has your business experience informed your philanthropy?

Besides joining boards and speaking on these issues, I’m excited about Delmar Divine, a former hospital I’m helping to renovate. The hospital part is going to be apartments for teachers, nurses, social workers, and public health and safety workers. And the offices are going to be affordable for nonprofits, with appropriate technology, lots of meeting rooms and all kinds of amenities meant for collaboration. An idea for Phase 2, which was a nursing school is, What if we made it an early childhood campus?

This is still a few years off?

Yes, but it’s already starting to come together.

It sounds like it will make a big difference in St. Louis.

I do believe that there are a lot of opportunities for us to do better when it comes to child care and supporting families. This should be a high priority of business, because it’s their employees and in the case of their children, it’s their future workers.