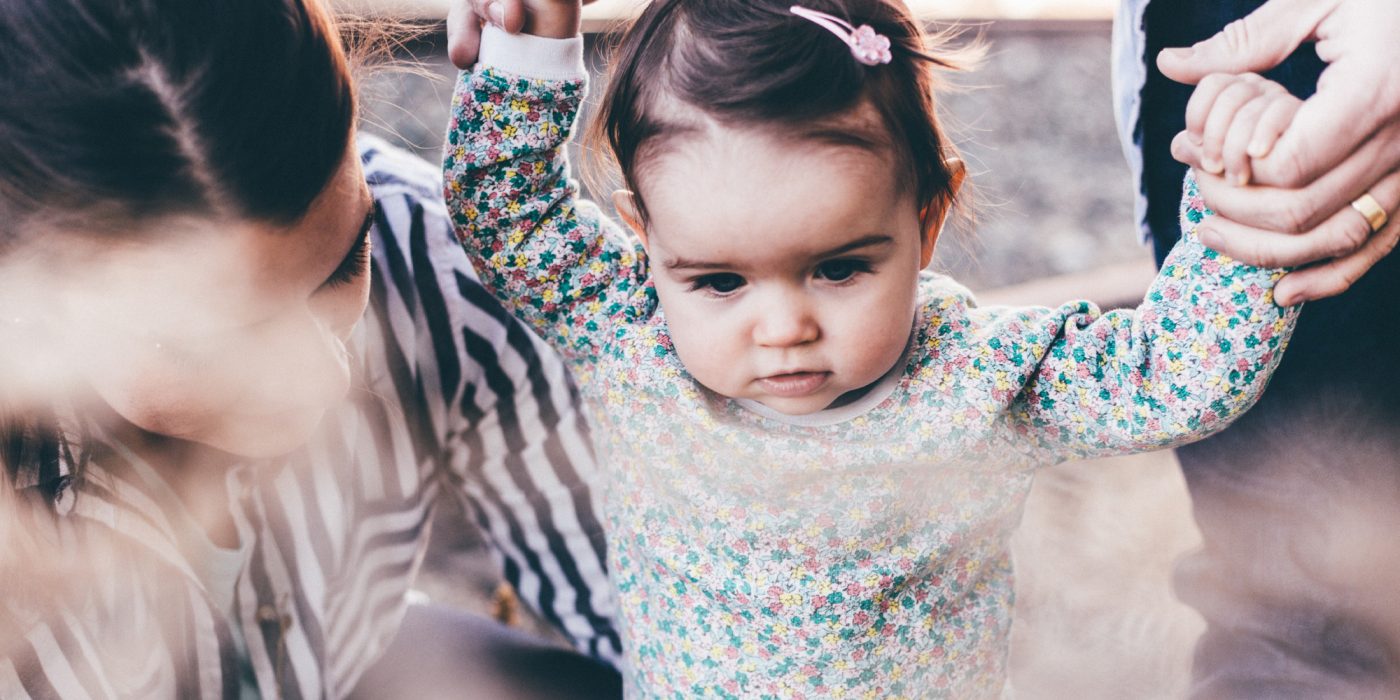 When babies are learning to walk, they fall on average 17 times an hour. Given that frequency of falls, you might think their little brains carefully computed all that negative input so they could learn from their errors. Apparently, that’s just not so. Babies don’t change their behavior based on negative feedback, according to researchers at NYU’s Infant Action Lab; mostly, the falls are trivial, and the babies just don’t care. They have places to go and playing to do, so they toddle, toddle, tumble, get up and toddle some more. Their drive to get from Point A to Point B makes a little thing like falling inconsequential in the scheme of things. And when they do fall, it’s a low-stakes venture with extremely rare negative consequences. So off they go, toddle, tumble, toddle.

“Babies have physics on their side,” researcher Danyang Han says with a laugh. Han’s recent paper, “The Impact of Errors in Infant Development: Falling like a baby,” coauthored with Dr. Karen Adolph, looks at the role of babies’ missteps as they learn to walk. The researchers hypothesized that understanding babies’ falling could provide a window into the role that errors play in how babies acquire basic skills—useful information not only for researchers wanting to know more about babies, but for scientists and engineers looking for the best way to approach machine learning and artificial intelligence.

“Babies natural way of falling protects them from serious injuries. Their bodies are close to the ground; they’re moving slowly and they’re very light weight,” Han says. “So, they don’t hit the ground very hard—and when they do, their bodies are 30 percent baby fat, and their bones are really strong. If an adult had 30 percent body fat, that would be obesity, but for babies, that’s padding.”

Like junior judo masters, babies naturally engage in the art of ukemi, breaking falls by absorbing the impact throughout the body. Babies automatically engage in a suite of reactive behaviors when they begin to fall—taking small steps to regain balance, grabbing for any nearby support to slow down the speed of the fall, bending their knees and reaching out with their hands to break the fall or landing on their bottoms if they’re falling backward. Nobody teaches them this and they don’t have to think about it. When they first start walking, and therefore falling, that knowledge is instantly present.

The same physics that render babies’ falls inconsequential are precisely those that can make falls so devastating for older people who take a spill. Elderly people are not so low to the ground; they have greater body mass, their bones are brittle and when they reach out to break their fall, it’s frequently their wrists or hips that break instead.

In fact, it was a fellow researcher’s documentation of elderly people’s falls that led Adolph to consider much more detailed data on infants’ falling. NYU’s Julius Silver Professor of Psychology and Neural Science, Adolph has studied infants’ movement for 30 years. She had always made note of falls as part of her apparatus and walking studies. When Canadian researcher Dr. Stephen Robinovitch, a world expert on falls among the elderly, spent a sabbatical in her lab and she saw the massive amount of data he had collected from falls in hundreds of older people in nursing homes, she realized that she already had a trove of data that could be analyzed to deepen researchers’ understanding of babies’ falls.

Deploying the tools of NYU’s high-tech Infant Action Lab (mentioned in our article about Mother-Child Synchrony), Adolph began to take a deeper dive into every aspect of infants’ falling. For the study for that formed the basis for Han and Adolph’s “Fall Like a Baby” paper, 138 families recruited from the New York City area brought their walking infants aged 13, 15 and 19 months to the lab, where they were observed for 20 minutes of spontaneous activity in a large playroom. (Details of the study can be found in Han’s and Adolph’s paper, which is available to the public.) None of the falls in the laboratory resulted in injury and severity was gauged by whether infants fussed, whether caregivers showed concern, and how long it took infants to recover and return to play. Researchers recorded 563 spontaneous falls during the course of the study. The babies fussed only 4.26 percent of the time, and caregivers expressed concern in only 7.64 percent of the babies falls.

“A lot of the parents’ language was about encouragement,” Han says. “’You’re fine. It’s fine. There’s a ball, can you go get the ball?’ And a lot of it was advice, ‘Oops. You fell. You gotta be careful with those stairs, love.’ But mostly, the babies just fell and got back up again.” 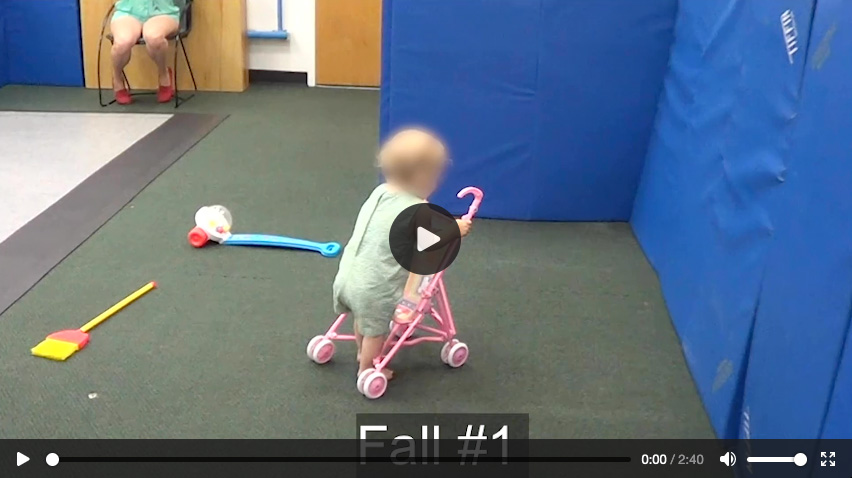 And mostly, that’s how falling is for babies. It’s trivial.

However, Adolph stresses, falling itself isn’t trivial for babies. In fact, it’s a leading cause of accidental injury and death in little babies.

“That’s why you have to keep your windows shut and block the stairs when they’re learning to crawl and walk,” she says. “They don’t understand what a bad fall can be.”

What babies don’t do is stop and consider that they just fell and maybe they’d better not try that again. Because the consequence of their falls is no big deal, they don’t even pause. Even babies whose parents reported significant falls before the study showed no inhibition about just going for it—toddle, toddle, tumble, toddle. Language learning in infants is the same process, Adolph says. Making “mistakes” while they’re learning to talk doesn’t even slow them down, as anyone within earshot of a babbling 1-year-old can attest.

Based on their research, Han and Adolph assert that babies learn basic skills like walking and talking by relying primarily on positive feedback when they accomplish their goals and discounting errors so that mistakes barely figure into the equation. What they don’t say is that all learning takes place this way. As we get older and our body of knowledge and needed skills become more complex and challenging, our errors are more costly and have more impact. “Oh well,” is not an adequate response to mistakes made learning to drive a car or climb a mountain.

But from a systems standpoint, the model of baby learning might offer an alternative to the reinforcement learning model for decision-making, which Microsoft describes, in part, as “algorithms and systems for technology that learns from its own successes (and failures).” If machine learning were to follow a model truly patterned after human learning, the model would be heavily weighted toward positive rewards and negative feedback would be inconsequential. Researchers in Adolph’s lab have run such a study with simulated robots and found that with machine learning as with infant learning, no penalty for mistakes is the best approach for getting flexible, generative learning and building more capacity to transfer learning to new situations.

The NYU researchers are now collaborating with a group of computer scientists and robotics engineers at Oregon State University on a project inspired by their work on infant falling. The reinforcement learning model that penalizes errors is ubiquitous in machine learning and artificial intelligence (AI), so the no-harm, no-foul model of the Infant Action Lab researchers might encounter resistance. But one of these days, who knows? Maybe robots and AI of the future will learn to fail like a baby.

Falls During Free Play: I love this one for the caregiver’s reaction: Oop, you fell. Yaaaayyyy! And up baby goes again.

Following a Fall, Also a Deliberate Transition to the Floor:  This video clip shows that the infant quickly displayed a suite of reactive behaviors when losing balance. The baby’s caregiver approached the baby after the fall but the baby brushes off her mom’s concern.