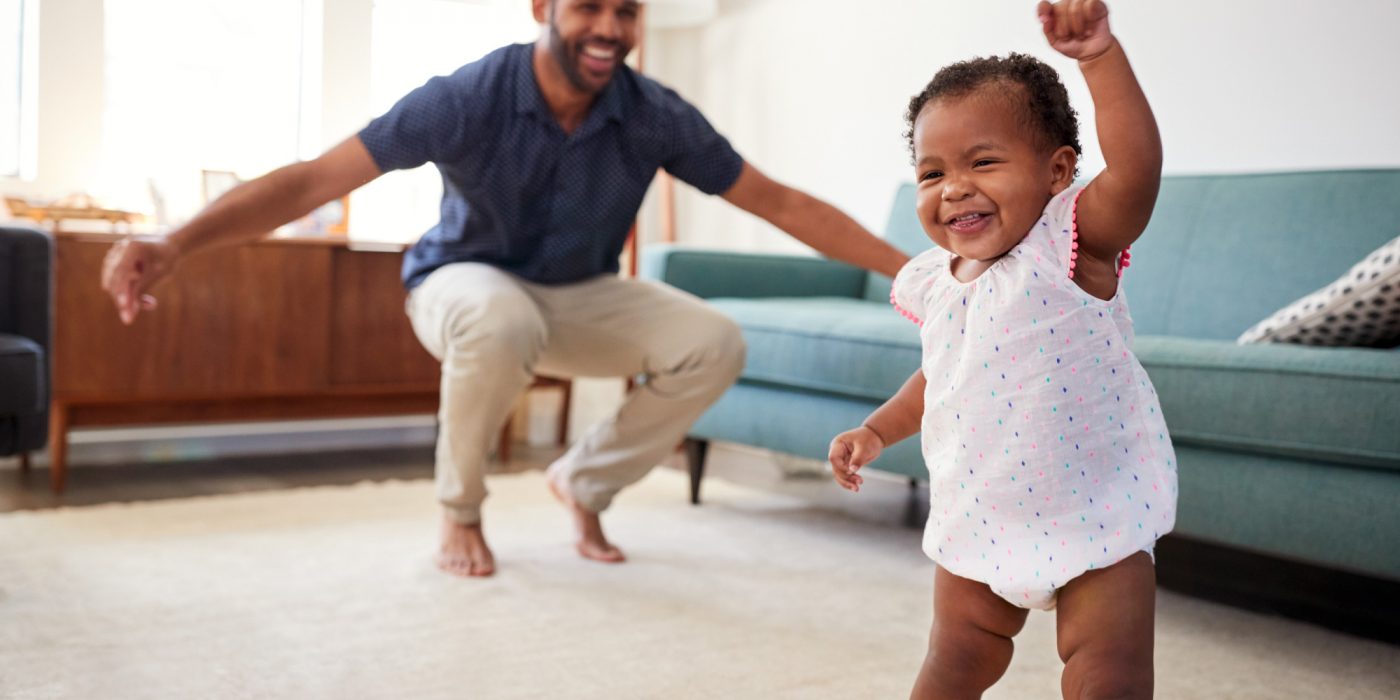 Whoever decided to use baby steps as a metaphor for timid, tenuous beginnings had it all wrong. Baby steps are bold things, requiring tenacity, determination and a ravenous hunger for the unknown. And that’s just for starters. Getting good at baby steps requires the same strategy the old joke recommends for reaching Carnegie Hall: practice, practice, practice.

Although it’s been a while for anyone reading this article, try to imagine all that it takes to go from being an infant lying on a blanket to being a little human who can flip over, rock back and forth, engage your core, take off and crawl to that dog bowl that’s just out of reach. Then to pull up, stand and finally take those first wobbly steps? What an astonishing achievement.

Those first steps are more often the side-to-side lurch best known to drunken sailors and adults navigating icy patches, but with practice, babies’ movement becomes more efficient and coordinated. They’re able to cover some ground; over time, they learn to navigate their environment in ways mere crawlers could never imagine. Today the dog dish, tomorrow the world!

Though a long-standing body of research and caregivers’ empirical observation shows that infants’ walking skill improves with time spent walking, researchers with New York University’s Infant Action Lab wanted to learn more about the factors that influence the development of walking skill.

They found that, even though the amount of time elapsed since a baby begins walking is a strong predictor of their skill at walking, other factors also affect how quickly infants progress in their mastery. One of the more eye-opening findings is the difference made by the amount of space a baby has for practice.

Imagine trying to learn complicated dance moves on a disco floor crowded with revelers and you’ll get some sense of the challenges for a baby staggering into their first attempts to get from Point A to B.

“If an infant learning to walk doesn’t have the physical space to practice, whether it’s a crowded home or their day care, that can affect how quickly they develop their walking skills,” says New York University doctoral candidate Christina Hospodar, lead author of “Practice and Proficiency: Factors that Facilitate Infant Walking Skill.” “Of the factors we tested, it was one of the most robust and relevant factors contributing to an infant’s walking skill.” Adjusting for all other factors, more crowded homes predicted shorter steps and wider step widths—which indicate less mature walking. More space meant the longer, narrower steps associated with being an experienced walker.

The study compared two different groups of infants from the greater New York City area. All the infants were healthy and born at term with roughly half born at Langone Health Center and half at Bellevue Hospital. Babies in the study were from 13 to 19 months old.

Caregivers brought their infants to the lab where they played for 20 minutes, then walked on a sensor-rich, pressure-sensitive gait mat that allowed researchers to track the timing and location of their steps. Step width, length and speed are traditional indicators of walking skill, Hospodar says, so these were measured along with the percentage of the session the infant spent walking, how many steps they took per walking minute, and the percentage of walking bouts that were 3 steps or less. Along with these data and basic demographic information, including the number of rooms in their homes and the number of adults and children living there, parents reported when their baby had started walking. Walking onset was defined as the first day caregivers saw their babies walk three meters across a room without holding onto anything, stopping or falling.

In what they believe is the first study to locate any factor aside from months walking that strongly predicts walking skill, the researchers found that each additional person per room decreased the baby’s walking skill by approximately one month of walking. Co-authors of the paper are post-doctoral fellow Justine E. Hoch, Do Kyeong Lee, Patrick E. Shrout and Dr. Karen E. Adolph, NYU’s Julius Silver Professor of Psychology and Neural Science. The researchers measured children’s race, ethnicity, the family’s primary language and caregivers’ education, but these sociodemographic factors didn’t hold statistical value, Hospodar says.

Ultimately, crowded environments had more bearing than other factors in the babies’ development of walking skills. The U.S. Census classifies homes as “crowded” if they contain more than one person per room. By that definition, she says, all the homes of Bellevue infants and half of the Langone infants would be classified as crowded. Previous studies found a reduction in gross motor skills among infants in crowded homes. In a different research group’s study of infant activity recruited from the same population as the Bellevue sample, only half of mothers gave their infants daily “tummy time,” essential to strengthening the child’s core muscles (again with the core!), only 34 percent placed their pre-walking babies on the floor and 57 percent reported that their babies were constrained for more than one hour a day, spending their time in equipment such as high chairs, car seats and playpens. Nearly half reported they were concerned about giving their babies unrestrained access to the floor because they feared possible injury due to the presence of other children, pets or vermin. That reluctance, Hospodar says, may be a logical explanation for why the Bellevue babies in the recent study would have a later onset age for walking.

Even within the parameters of living space, she says, individual babies respond to the challenge of walking in different ways; some choose to really go for it while others hang back. The researchers found that the babies’ weight and height did not predict their walking skill, though some studies have found that heavier babies tend to crawl and walk somewhat later than others. In other studies, factors such as race, ethnicity and socioeconomic status have been found to affect infants’ age to start walking because they’re associated with caregiving practices, such as keeping babies cradle-bound for most of their early infancy. In cultures that endorse rigorous handling and deliberate exercise, babies begin walking several weeks to months earlier than cultures without such practices, researchers say.

The transition from crawling to walking allows the infant to go farther, faster and expands their vantage point from the floor below them to the room around them, which provides endless opportunities to play and learn. The good news is that babies who’ve gotten a later start tend to catch up, though Hospodar says the research on long-term consequences is limited.

“Parents really shouldn’t get hung up on the exact age their babies start walking,” she says. “In terms of U.S. norms, typically if a baby isn’t walking by 16 months the pediatrician would be on alert—and that might just mean they need some physical therapy or early intervention services. The fact that a baby is late to start walking doesn’t necessarily mean they’re disadvantaged. There may be other factors that we didn’t study or measure, and there will always be trade-offs.

“If an infant isn’t walking yet,” she says, “maybe they’re working on other developmental skills and may be more cognitively developed than younger infants.”

Whenever they get started, once babies have the distinction of “walking,” they’re off to the races. Just make sure they have some room to roam.