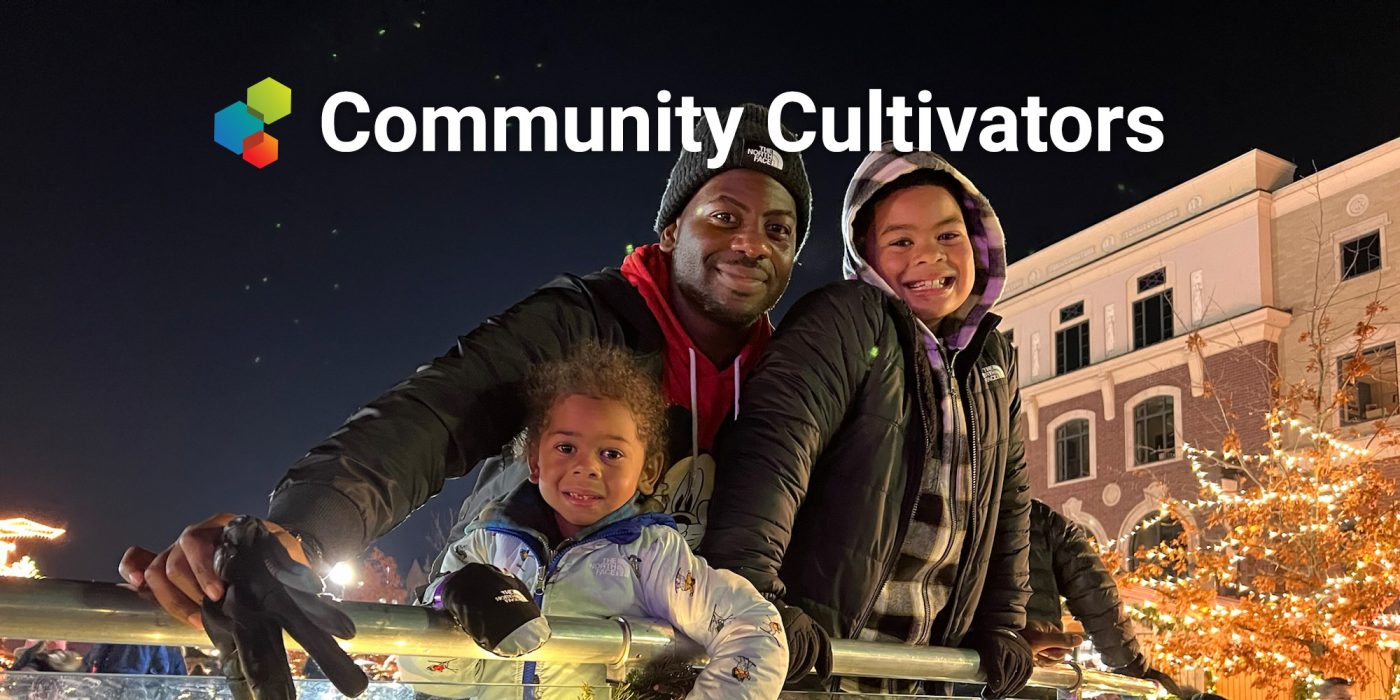 Ten minutes north of Indianapolis, in a city called Carmel, something strange was going on in the middle of the night. While his wife and the kids were sleeping, Emmanuel Carter was freestyling about spiders.

In normal times, auditions for Noggin’s new original early learning series would have taken place in-person, but in October 2020, candidates were invited to record their demo reels at home. “I had just gotten home at 1:30 a.m. from taping a virtual benefit for the Keep Indy Creating Relief Fund,” Carter recalls, “and I saw this invitation, and I was like, I cannot miss this opportunity.

In an uncertain and sometimes frightening world, Emmanuel Carter might be the high-energy host children need today.

So I had my family all shuffle into another room, because it was going to get loud, and I recorded the audition from 2:00 to 6:00 a.m.” With no time to research spiders or even to write lyrics down, he simply improvised on the spot.

He felt he was onto something when he showed his wife the recording. “She started crying,” he says, “and through her teary eyes, she said, ‘You are going to change the world.’ And it’s really true: these types of shows changed my world.”

Sean Farrell, SVP of content and strategy at Noggin, noted that not only was Carter right for the part, but his audition inspired changes to the program’s format to incorporate much more singing and dancing into the show that became known as Noggin Knows. “There is no barrier between Emmanuel and the viewer. He has a unique ability to reach through the screen and make you feel like he is talking just to you. With our little-kid audience, this direct and personal connection is so important. We see kids talking back to Emmanuel while watching episodes as if he is right there with them. It’s a wonderful gift.”

Noggin Knows mixes education and entertainment. Carter describes it as “a virtual preschool classroom that helps kids learn readiness skills through a series of themed lessons alongside their favorite Nick Jr. characters and me as their teacher.”

Musically, Carter is also the product of his influences—and then some. “I grew up listening to my mother and my grandma sing gospel all the time,” he says. “On cleaning days, they would blast gospel music all throughout the house.” Disney soundtracks, with their lyrics about following your dreams, were the next big phase in his development. “That’s where I got an ear for orchestration,” he observes. And then came the King of Pop. Carter grew up idolizing fellow Hoosier State icon Michael Jackson. “He changed my entire perspective of music. Seeing what he could do, I knew that it was possible to be able to do what I wanted to do in the entertainment industry, no matter where I was from.”

Beyond TV and musical inspirations, one person stands out as Carter’s greatest source of motivation—his mother, Cindy Carter. He never met his father, and he and his two younger siblings grew up in a household with their mother and grandmother. “Mother didn’t have a lot growing up,” he states, “so she taught us to value what we have and to value who we are.”

Religion played a big part in his upbringing, and the family went to church every Sunday. A poster bought in a religious bookstore hung on his wall with the message:

You Are an Original. Just Ask Your Creator.

“I grew up,” Carter says, “with this with deep-seated idea that there was nobody like me. And that’s the idea that my mother put inside of me.” Carter and his wife have three sons: Aidyn Storm (9), Avalon Rain (5) and Axel Thunder (1), and he strives as a father to instill in them the same degree of confidence. “They take up a great deal of my time,” he says, “but the way they take it up is one of the most wonderful uses of my time ever, because I love watching these little guys grow into these charismatic, loving young dudes.”

Although we’ve all learned a lot about teleconferencing in the past few years, a preschool show isn’t a classroom, but it can certainly spark something, and as Irish poet William Butler Yeats wrote, “Education is not the filling of a pail, but the lighting of a fire.” For Carter, it’s all about conveying a sense of wonder. “Everything is still so amazing to a child,” he says. “Everything is still exciting. Everything is still magical.”

Buckle your seatbelts, kids, because Noggin Knows is taking you on a trip around the U.S. to discover science, nature and other cultures. Your travel companions include such familiar faces from Nick Jr. as Molly from the Bubble Guppies, Skye from PAW Patrol and Santiago from Santiago of the Seas. In the course of detonating what he describes as “an explosion of awe” (take that, W. B. Yeats), Carter also focuses on social emotional lessons. “We’re not just learning about dinosaurs and space,” he says. “We really want to be all in on inclusivity. As a Black man, I am so grateful to be inspiring all those children who might feel underrepresented to go out and be the person that they know that they can be.” In the wake of George Floyd’s murder, he says, this mission took on added urgency.

Another perk of the job is gaining knowledge that he can share with his children. “The more you teach, the more you learn about what you’re teaching.”

June 2021 was an extraordinary moment to launch a new show for kids. The education component matters, of course, but we’re all asking ourselves what “normal” early learning means anymore. Families are stressed, and their children feel it, whether or not they understand what a pandemic is. Noggin Knows has an added responsibility of connecting the kids who aren’t experiencing the world the way they’re supposed to.

Carter says this responsibility permeates everything about the show. “We’re putting something that’s trustworthy on the screen for children who are missing out on anything that they would’ve had in school socially or emotionally,” he says.

His warmth and enthusiasm jump out of the screen, and the children are eating it up. “I get so many messages on Instagram,” he says (follow him at @emmancarter). “Parents send me videos of their children following the lessons and dancing along.”

In an uncertain and sometimes frightening world, Carter might be the high-energy host children need today. “If I’m on the screen,” he says, “and I’m showing you this wonderful world, then I think I’ve done my job. Because the world is only as scary as we let the children believe it is.”