Rebecca Gale: Every News Outlet Should Have a Childcare Beat 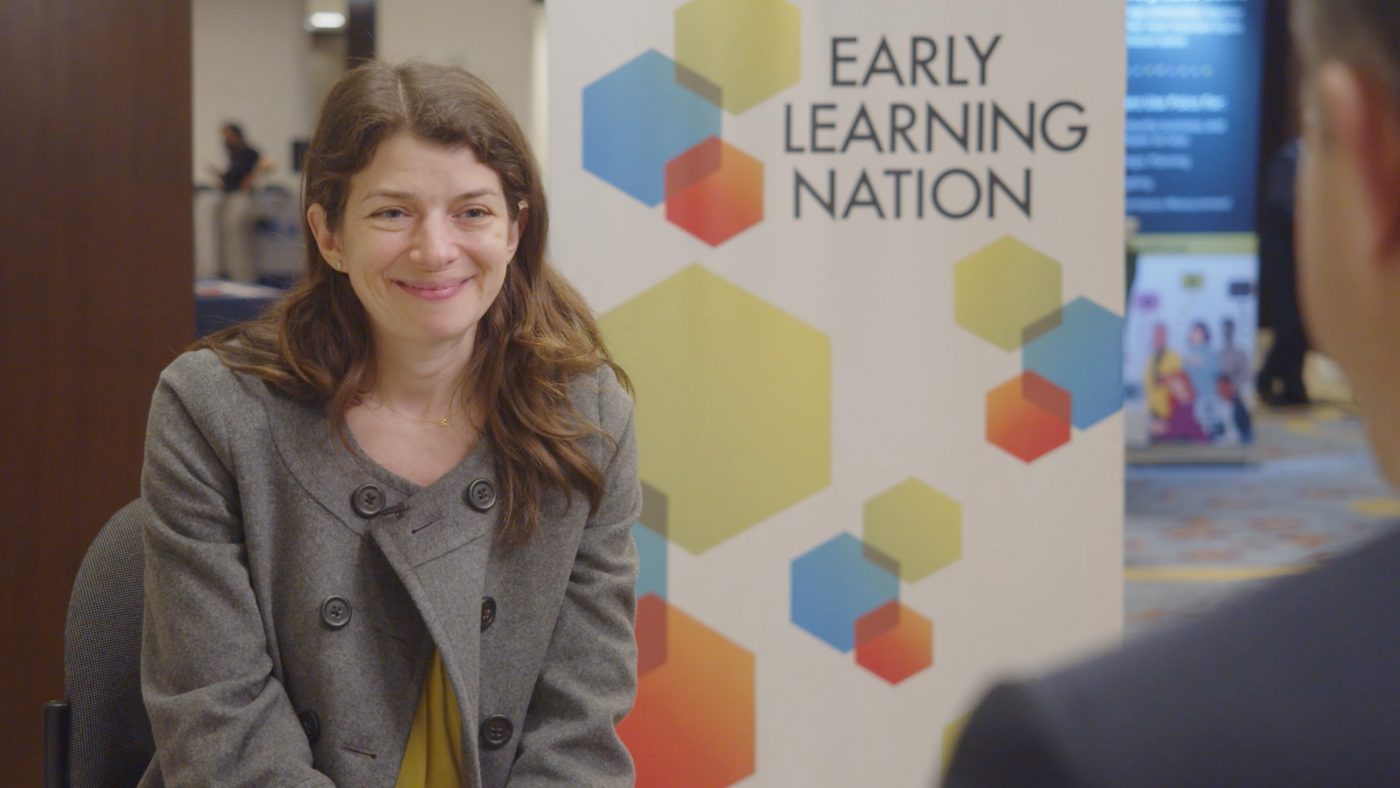 As a Reporting Fellow at New America’s Better Life Lab, Rebecca Gale has covered many aspects of America’s approach to child care. And one thing she knows: it’s complicated. From economics to use cases to the delivery system to funding and beyond, the U.S. has no one-size-fits-all approach. That patchwork leaves too many gaps, and that’s just one reason Gale argues that one way to improve America’s child care system is to improve how journalists report about it.

Chris Riback:                 So you co-authored one of the most provocative and fresh and well-reasoned pieces that I have read in a while.

Rebecca Gale:               Because childcare is complicated, and it’s not something somebody can necessarily understand very quickly. The economics are complicated. The way people use it is complicated. Something called the delivery system, which is the way childcare gets from the executive branch funding to actually someone watching your child, that’s also complicated. Because people have such myriad needs with childcare, there’s not a one size fits all approach. You’re seeing reporters, well-meaning reporters, looking for a silver bullet solution. There really isn’t one.

Beat reporting allows you to develop an expertise and really dive into it and really understand what makes a system work, where supports are needed, how to improve an existing system, and what maybe needs a bigger overhaul. That’s how we were arguing for it. We saw with the pandemic, there was I think 90% increase in the number of childcare stories. You have a lot of reporters who, maybe they have children, maybe they don’t, maybe they had children 20 years ago in childcare. It’s very different now. So are the family dynamics in terms of who works and what hours they work. You’re seeing people approach this topic and trying to write these intelligent stories on it. It’s hard to do. It’s not saying a good reporter can’t do it, but by having a dedicated beat, they’ll be able to get into the nuances much better.

Chris Riback:                 So much reporting is how do you connect the seemingly disparate items that actually together make what is important.

Rebecca Gale:               Exactly right. Then you also get the sources. You get to talk to experts, you develop an expertise, and you develop relationships within the field. So when you have to write a story on something small, that’s changing, something small may be changing, but it may have a much bigger impact. That’s when you need a beat reporter to sort of figure that out.

Chris Riback:                 What a powerful line you had. Complexity and urgency don’t pair well. It’s unrealistic to expect a reporter new to covering child care to churn out a nuanced story on a tight deadline. It’s totally the point.

Rebecca Gale:               Completely agree. For a long time, I covered a lot of work and family issues, and one of them was paid family leave. When I started covering childcare for better life lab as a reporting fellow, I found the stories were taking me a lot longer to write. I was wondering, why am I taking so long to turn this story around? It was because it’s much more complicated to understand. There’s not one way to deliver childcare. There’s not one major type of needs for childcare. Sure, people need someone to watch their kids. But childcare looks different for infants, for toddlers, and for older children, as well as the time of day you need it is also very different. I think really delving into those issues took a lot of time. Once you’re there, it’s great, and you can really explore, and there’s a lot of great stories, including ones that Early Learning Nation has run on their site about childcare. But it does take that expertise to really get there.

Chris Riback:                 It feels to me like something is really missing by not having that storytelling. You could talk about not having sufficient childcare centers. That’d be bad, not having programs or funding. That’d be bad, not having childcare people who can do the job, that’d be bad. But not having the reporting, not having the storytelling, you’re missing one of the … Another thing that really stood out to me from what you wrote was about the range of standards, the incredible range of, or lack of standards. You highlighted too in Massachusetts, a state like Massachusetts, anyone watching a single non-relative child in their own home requires a childcare license. Whereas in South Dakota, a childcare giver can watch up to 12 children without requiring a license. How is it possible that there’s such a wide range?

Rebecca Gale:               Well, there’s huge disparities because so many of these laws are made at the state level, and they’re tied to things like subsidies and funding and licensing. Because you have the state level doing it, they have different needs, and they also have different levels of oversight and different levels of even going through the licensing process. My understanding is to get the licensing in Massachusetts, it’s a pretty high lift and there’s even companies coming in to help with this process because it’s so much.

In South Dakota, 12 kids is a lot. You may never need a license. I don’t want to speak for the state, but it’s worth exploring that the state doesn’t dedicate those resources to oversight and licensing, and there’s advantages and disadvantages to both sides of it. Again, this gets back into what beat reporting does, really understanding the licensing of where you live, why it matters, how it differs is a big deal, not only from a policy debate, but also for the people who want to go through the licensing process. How do they even know where to begin? Navigating these government sites isn’t for everyone. And to expect someone to go in and be able to jump through these hoops, to provide a valuable, necessary service for their community, that’s a big ask. We need to be careful when we ask people to do these things what we actually need them to do and how they’re going to be able to do it.

Chris Riback:                 Relatedly, another analogy that you gave is that there’s no school district for early childhood centers. That makes a big difference. There’s no coordinating entity.

Rebecca Gale:               There’s no human resources department. There’s no benefits team. There’s very few of these infrastructures in place. What happens is these jobs of running a daycare, they’re high burnout jobs with very low margins and the economics don’t add up. People don’t question the economics of public schools in the same way. We understand that the kids are getting an education and that parents and students aren’t expected to pay market value for it.

But for childcare, the expectation’s not there, and there’s a lot of history as to why we don’t treat childcare as a public good and why there’s not a social value assigned to it. I think some of that goes back to the way families in our country have developed. Some of it goes back to the fact that childcare has come in waves in terms of being able to support it. The military has an excellent childcare system set up, but the rest of the country really doesn’t. As we’re seeing some places, like Vermont is notable for trying to really tackle childcare as a public good, as more of these things happen, I think the conversation will move forward. But we really do need those reporters to keep the story going too.

Chris Riback:                 Aside from my reaction that it was a brilliant argument, brilliantly made, what’s been the reaction to your calling for childcare being a beat in our journalistic offices?

Rebecca Gale:               What’s interesting is we got a lot of great reaction online, and there were someone who called out a number of publications that do order report on childcare, which I think are excellent. I think they are providing a great service. I think the publication that covers one topic or a handful of topics that are connected makes a lot of sense. At the same time, what we’re really calling for is for this to be part of daily news the way that the economics is covered.

Rebecca Gale:               I think the pandemic for all the things it shifted in this country, it did change a conversation about childcare, where employers, it mattered to them, where economics, it took a much bigger role. We want people to get back to work and get back to the office. There needs to be a safe, reliable place they can send their kids. It was good in that childcare came up in its level of importance, but when it’s really important, that’s when we’ll start seeing even more news stories from outlets that don’t traditionally cover it as a beat.

Chris Riback:                 And to the extent that you feel comfortable revealing your next scoop and secret, what’s next for you on reporting?

Rebecca Gale:               I’m working on a story about a push to make unpaid labor something that matters more in the economy. It’s a bit of a scoop, so I don’t have all details yet to reveal, but there is definitely a force of people out there who are high powered, who are into the economics of things, who have a lot of entrepreneurial background who think that unpaid labor, the care work, the care economy needs to be valued more. There are some ways they’re trying to make that happen. I will keep you posted.