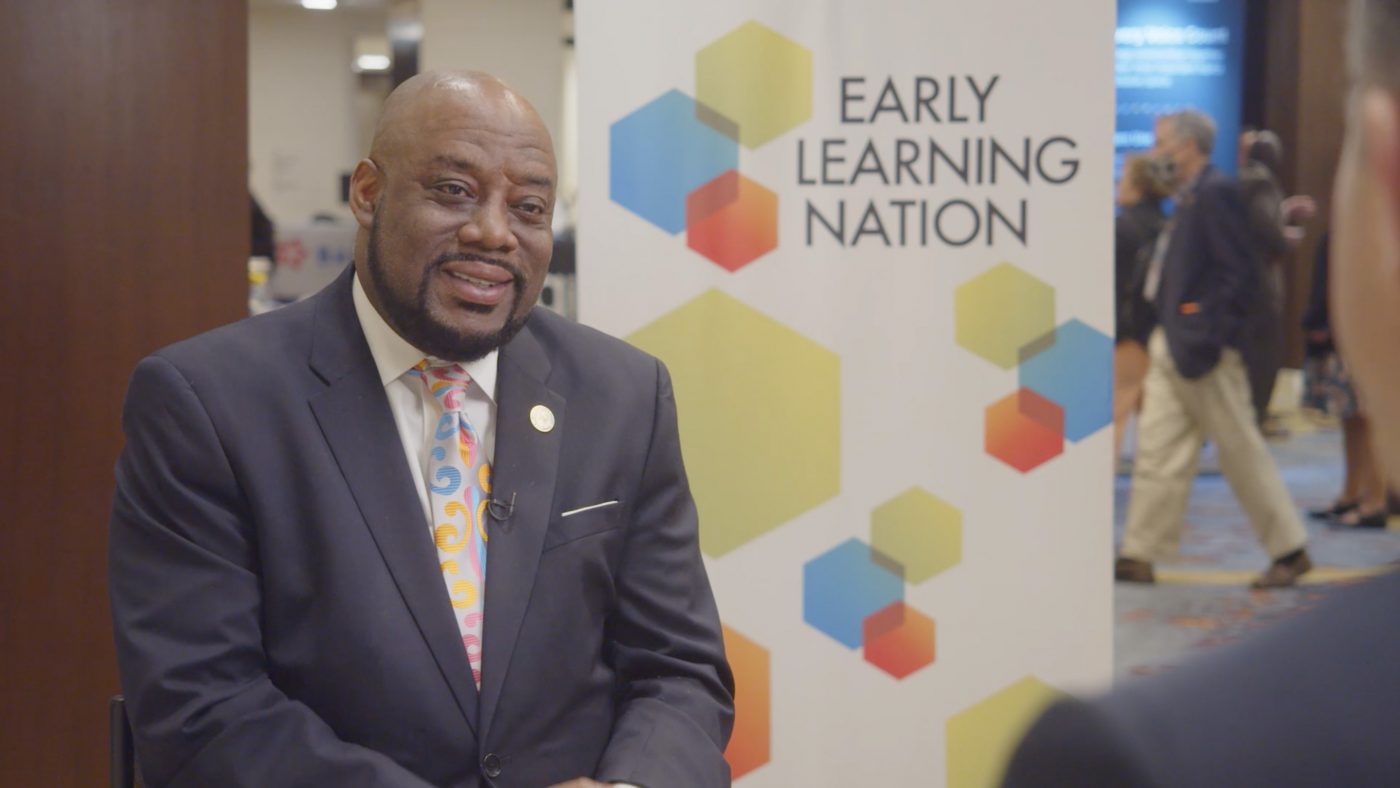 Covid arrived and, suddenly, every parent became a teacher. Savannah (GA) Mayor Van Johnson sees the positive: the ability for all of us to better support teachers. Mayor Johnson also sees the need to make up for lost time, and the importance of ensuring that early learning occurs everywhere, from classrooms to churches. That’s why his message to parents is straightforward: childhood learning is “a lifetime investment. It’s not a sprint, it’s a marathon. It’s a four-quarter game.”

Mayor Van Johnson:      Well, I think like everything else, it’s critical. COVID has thrown a monkey wrench, even in the good plans. The fact is, that we have kids that are two years old now who’ve really never known life without being in a COVID environment. You have some kids that are in the most developmental stages of their lives, particularly those that are in the four to six year old range, that just basically have lost two years of socialization, two years of early learning by certified credential professionals. That time is just gone. And so now, we’re trying to play catch up to get young people back to where they need to be.

Chris Riback:                 You don’t need me to tell you the pandemic was difficult for all of us. It was very difficult for parents, employment, health, infrastructure, maybe their parents caring for their families. How do you talk with parents about staying focused on early learning when they’ve got so much else going on in their lives?

Mayor Van Johnson:      Well, it was. I mean, the fact of the matter is, I think that parents gained a new appreciation for teachers.

Mayor Van Johnson:      Because they became the teachers. I mean, your loving your own is fine during the summers and they’re fine when they go to sleep at night, but the fact now you’re the teacher and now you’re in charge of making sure this young person learns and your young person is a different person, and so you start seeing some of the things that the teachers saw. So I think they gained a new appreciation for that.

Mayor Van Johnson:      And I think teachers were very happy about that, but I think it gave a better appreciation for that. So for us, I think it’s necessary for us now to take that knowledge, take what we’ve learned and then to be able to ramp up the learning. It has to be accelerated now, because we’re not getting that time back. How do we make sure young people learn their ABCs? How do we make sure that they’re pre-K and kindergarten ready? How do we make sure that they’re able to go into school willing to succeed? Otherwise, we end up with essentially overage kids in younger grades, and that’s not good for anyone. So I think it has to be a community-wide approach.

Mayor Van Johnson:      Well, it has to be not only focus and effort, but it’s also engaging from professionals. There are people who know how this goes and they know about the developmental process of children. They know how young people learn. So, we need to be able to get that data, get that information, get those techniques, get those tactics, standardize them, make them wildly available so that parents can help to share those things at home. Now I’m hoping that we do that better as a nation to make sure we catch up. If we don’t, we’ll be further behind in the world economy, as it relates to education.

Chris Riback:                 Now, I understand that you, like many other mayors in many other cities, have a keen focus on public safety and on reducing violence. What’s the bridge across that total healing and the work that needs to be done to make Savannah or any city, a safe place to be.

Mayor Van Johnson:      Well, I mean, I think I fully realize that our criminals of tomorrow are in Pampers today. And it’s sad to say that, but if you think of about it, we have here opportunities, or they can become consequences. And so in Savannah, what we want to be able to do is to look at the opportunity and create the opportunity. We know that if young people don’t learn by the third grade, because that’s a very transitional stage, that’s where they go from learning to read, to then reading to learn. And if they’re not able to get it by third grade in Savannah, our challenge has been that those young people, once you fall behind, it’s hard to catch up. And, there’s been some talk that they build, they project prison cells by the number of people that are flunking in third grade, because they know if you’re flunking in third grade, it’s hard for you to catch up.

Chris Riback:                 What about the young people in Savannah? How do they react? I assume you get plenty of opportunity to engage with them.

Mayor Van Johnson:      My favorite thing to do.

Mayor Van Johnson:      Being scared and I understand it. And the fact is, this is one of the few times in my life, in over 30 years of working with young people, where I could not relate to something they were telling me. I could not imagine going my senior year in high school leaving in March and never coming back again. I could not see going through my 11th grade year, my 10th grade year, or my ninth grade year, at home. I mean, I know Zoom drives me crazy as an adult, so could you imagine that you just lose that interactive experience, that socialization experience? We know young people go to school because of their friends. I mean, they learn later on, but they go there because of their friends.

So just to become increasingly isolated, we know that issues of mental health have ramped up. We know the issues of suicide have ramped up, because young people did not have that outlet. And so admittedly, I just felt really at a loss, other than just to listen, because understanding what they go through, it never happened to me and so, you just be reassuring. You validate what they feel. And when you hear certain code words, you take that, let’s get them the help that they need. Let’s become that village around that young person.

Chris Riback:                 You must have learned about yourself. What an interesting concept. You were, for one of the first times, put in a situation where you just couldn’t relate. What did you have inside you to figure out what to do?

Mayor Van Johnson:      I think initially it was like, what the hell is going on here? That was my first thing. And the second thing was, I didn’t sign up for this. I just became mayor January the 1st, 2020. I served 16 years on council and January 1st, 2020, I became mayor. And I mean, it was going really well January and February. And March, I came to DC for the National League of Cities. And later on that week, we shut down on St. Patrick’s Day, which is the second largest in the country and has been going on for over 200 years. And I’m sitting here and I’m like, well, somebody show me the big mayor’s book to see, because there has to be something in the big Mayor’s book.

It said that we would go with masks, we were the first city in Georgia to go to masks, even after our governor said that we shouldn’t. But we did it because it was the right thing to do. When the vaccines came online in December, again, we were pushing for those vaccines and vaccination. When we got better, we got rid of the masks. When it got worse, we put the masks on again. And when we were able to do large scale activities, then we rolled back into that. So for me, it’s always been about the science. I think that health is not red or blue. I don’t think it’s black or white. It’s about the science. And so whatever I can do to keep my folks healthy, I was willing to do that.

Chris Riback:                 Well, none of us, particularly mayors, get to choose the times in which we do what we do. I’m sure you are looking forward to the next stage and helping bring Savannah forward.

Mayor Van Johnson:      I’m looking forward to this week. Our St. Patrick’s Day parade is on for the first time in two years, so we’re excited. I finally get a chance to do mayoral things and be in a parade and waving to people and kiss babies and drink green beer, finally.