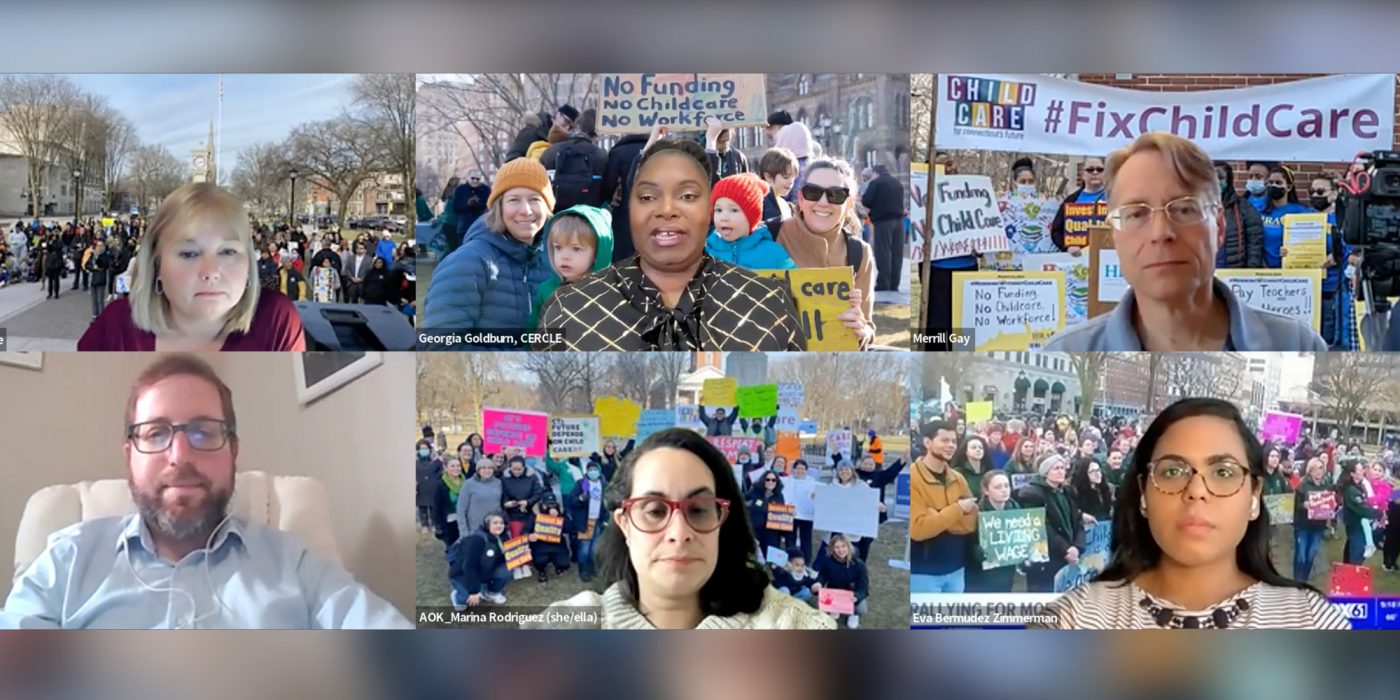 There’s a wonderful quote commonly attributed to Margaret Mead: “Never doubt that a small group of thoughtful, committed citizens can change the world; indeed, it’s the only thing that ever has.” On March 15, the Child Care for Connecticut’s Future coalition proved the power of this sentiment with the Morning Without Child Care action, which gave the state a preview of what would happen if the industry collapsed.

Did Morning Without Child Care actually change the world? It would appear so. Connecticut legislators, previously handed a budget of $0, are now proposing $124 million to support the industry, and the success of the action has inspired a national event.

👉 The National Day Without Child Care is Monday, May 9. Find out more.

Early Learning Nation and the Alliance for Early Success cosponsored a webinar on April 14 exploring how the Morning Without Child Care action came together, and lessons that apply beyond Connecticut. Moderated by author and ELN columnist Elliot Haspel, the conversation featured:

👉 Read the panelist bios and discover more about the event

1. Anger can be a productive emotion. Morning Without Child Care arose out of a listserv rant. Goldburn, a veteran child care professional based in New Haven, felt disappointment, even disgust, on March 1 when she saw Governor Ned Lamont’s proposed budget included $90 million to upgrade school HVAC systems but nothing to buttress a rickety child care system.

“In the early days of the pandemic,” she recalled, “We were being venerated, celebrated, called heroes,” but a budget is an expression of values, and this budget showed zero appreciation for the sacrifices made by the educators who support early learning and language development. “I felt disrespected and undervalued,” Goldburn said. Her primal scream resonated with professionals across the state, and other advocates and activists came together to harness the anger into an action plan.

👉 Watch the webinar to learn how they did it.

2. This overnight plan was 10 years in the making. The policy team at Connecticut Voices for Children affirmed Goldburn’s interpretation of the budget, and a series of day and evening meetings took shape, with Zimmerman, Rainville, Rodriquez, Gay and others mobilizing their networks through conference calls with 400-500 participants—and even more when Representative Rosa DeLauro got on the line.

3. Everyone could do something. Organizers initially envisioned a day without child care, but this plan met with resistance even from providers and parents who were sympathetic to the cause. A morning demonstration proved more feasible and just as effective. Over 60 programs showed up at demonstrations across the state. Zimmerman compared her role to that of a wedding planner: delegating and making sure things are getting done.

Because members of the SEIU/CSEA union have a no-strike clause in their contracts, they brought the children along and called it a field trip. Those who couldn’t be there in person joined on social media. Recognizing that some providers couldn’t or wouldn’t actually close, Rainville said, organizers suggested that they take part in ways they felt comfortable with, such as reaching out to press, contacting parents and signing a letter of solidarity. “When they belonged to a living, breathing coalition,” she said, “They no longer felt isolated.” Rodriguez underscored, “Child care workers led this action.”

4. Media matters. Noting that merely closing the doors of child care facilities wouldn’t attract the TV cameras, Gay said, “Press needs to have something to cover.” Loud, colorful, peaceful demonstrations with children holding signs and singing “If You’re Happy and You Know It”—now that’s something that comes across on TV.

In the New Haven Independent, Mayor Justin Elicker, father of a young daughter, expressed support for the rally and called upon the state to provide more funding. Fox News, Telemundo and other outlets covered the story.

5. Child care work is connected to social justice. Organizers and participants alike recognized that the meaning of the Morning Without Child Care goes beyond hourly wages. If Connecticut would invest $700 million in early education, the benefits would accrue across the economy, especially for families and workers of color. Instead of fighting over crumbs, Gay said, we’d be baking a whole new cake. Returning to the theme of the anger that set off this event, Goldburn asserted that it applies beyond child care: “This goes for anything you’re passionate about.”