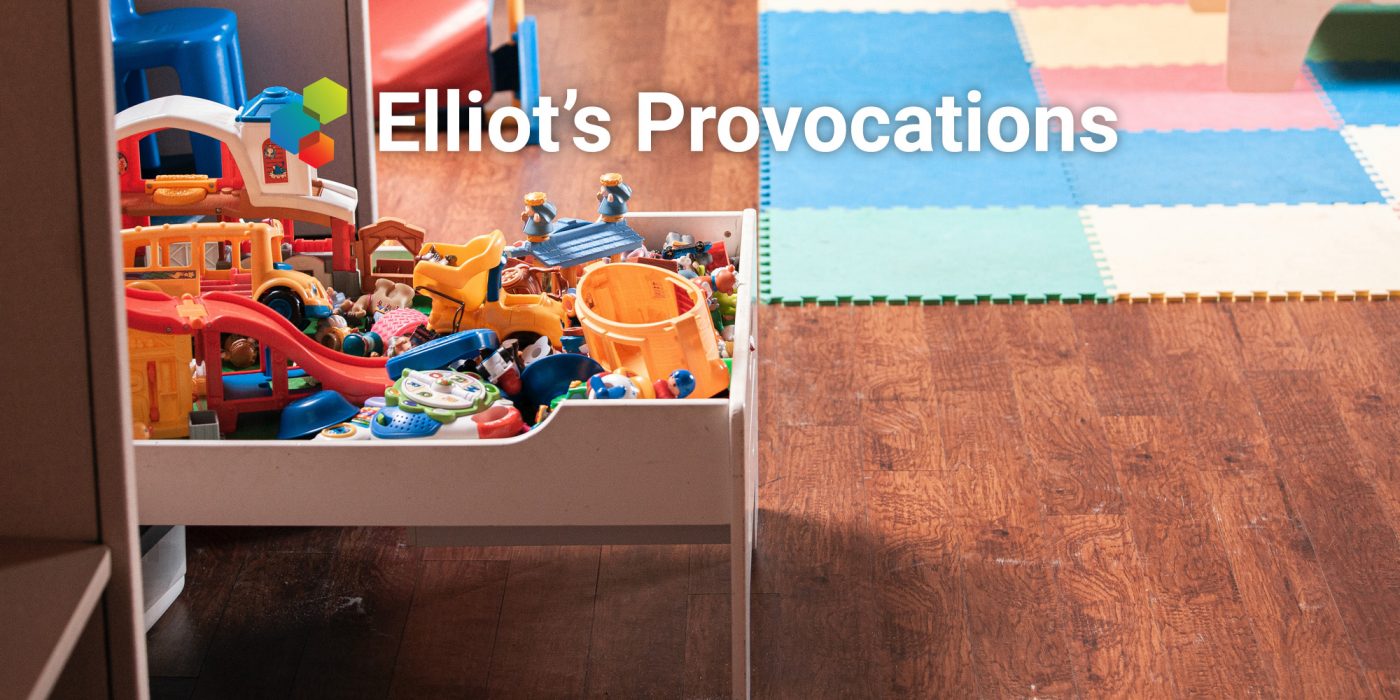 The phrase “corporate child care” has always struck me as a bad joke, something that belongs more in a Boss Baby movie than as a substantial part of the U.S. child care landscape. While for-profit chain companies are here to stay for now, we should start talking about the role—if any —for these chains in child care’s future. (I know, by the way, this isn’t my most popular opinion, but hey, the column’s called Elliot’s Provocations.)

First, let’s get clear on who we’re talking about here. I have no issue with small for-profit programs such as family child cares or even local chains that operate three or four centers. My comments are restricted to large chains that are either publicly traded companies or backed by private equity dollars. This category of companies includes names you are likely familiar with, names like Kindercare, Bright Horizons, Primrose and The Learning Experience. Together, they make up somewhere around 10% of the formal child care market; Kindercare is the largest, serving over 125,000 kids in more than 2,000 locations.

These are also companies with a distinctive profit motive.

That profit motive is the heart of the matter. While the owner of a family child care business obviously wants to make a living, they are responsible only to themselves. Although we can draw some generalized conclusions about different program types, as one researcher has put it, “not all for-profit entrepreneurs are profit maximizers and not all nonprofit centers are trustworthy.”

A publicly traded company, on the other hand, is responsible to its shareholders—has legal fiduciary duties to those shareholders—and lives or dies by a stock price that is attuned to its profit. Similarly, a private equity-backed enterprise is structured to make money for its investors. That is, by and large, its raison d’etre.

You see the problem, of course. Making money is not always synonymous with what is best for children, families and staff. A caveat: I think plenty of people who work for the big chains want to do right by children, families and staff. There are big chain programs that participate in state quality rating systems and are assessed to be excellent. These programs are, however, inherently part of corporations that by their very nature must serve multiple masters.

We don’t have great U.S. data comparing chains to other programs, but what does exist paints the picture you might expect. A 2007 analysis found that, “Nonprofit centers evidenced higher caregiver wages and education at most ages and better quality, child/staff ratios, turnover, caregiver professionalism and positive caregiving for toddlers and preschoolers,” with for-profit chain programs broadly showing the worst outcomes. This has been the international experience as well.

There is also evidence from other care sectors that investor money can influence corner-cutting, resulting in lower quality. For instance, a 2021 Cornell study found that private equity-backed nursing homes had, on average, significantly more problems: “Investigators found that residents at private equity-owned facilities were 11 percent more likely to have an [emergency room] visit and 8.7 percent more likely to be hospitalized.” For-profit chain K-12 schools and colleges, too, have been plagued by low quality — and worse.

Does the profit motive indeed play into decision-making at the big chains? Consider Kindercare’s 2021 SEC filing (a document whose mere existence feels odd). To their credit, the company takes pains in its filing to point out its commitment to quality and “educational excellence.” That said, after noting that any increases in state/federal minimum wages or other upward pressure on wages could hurt their business, Kindercare writes:

“Our success depends on our ability to continue to pass along these costs to our families and to meet our changing labor needs while controlling costs. In the event that we cannot increase the price for our services to cover these higher wage and benefit costs without reducing family demand for our services, our margins could be adversely affected, which could have a material adverse effect on our business, financial condition and results of operations as well as our growth.”

Ugh (this comes a couple paragraphs after noting the danger of unionization efforts, another fun read). Now, a nonprofit center has to go through a similar thought process: to attract talent in a competitive labor market, we have to raise wages, and that money has to come from somewhere. The difference, I would argue, is in the next thought: Kindercare says ‘we have to pass the cost on to our families in order to succeed’ whereas many nonprofit centers I know say ‘we’re going to do everything humanly possible to avoid passing the cost on to our families.’

So why have big chains persisted? Their economies of scale and access to investor capital allows them to surmount, to a degree, many of the structural limitations of child care finance. As Maria Aspan reported in a major Fortune piece on these companies, “for-profit Big Childcare players are emerging from the pandemic as the strongest remaining pieces of the nation’s decrepit childcare infrastructure.” Indeed, these chains have been snapping up facilities forced to shutter by the pandemic and ongoing staffing shortages.

The chains, therefore, are here to stay for now. And frankly, we need them for the moment. With child care capacity low and the sector staggered, that 10% of the market—some of the only programs still able to expand, as Aspan points out—is vital. The question is, in a future state where there is robust public funding, what then?

Canada offers a highly instructive model. With Ontario becoming the last province to strike an agreement with the federal government, Canada now has what can be reasonably considered universal child care. Permanent public money is being pumped in to increase the number of slots, slice costs to an average of $10 a day, and raise educator wages. The structure of the system (which is slightly different in each province) is important: priority for the new money is given to nonprofit, community-based and family child care providers. In Nova Scotia, for instance, for-profit chains can continue operating their existing sites but must agree to abide by certain policies in order to be eligible for the new funding. If they want to expand and get public funding, they must convert to non-profit status.

This type of policy could be sensible once the U.S. catches up to our northern neighbors. It honors the fact that for-profit chains are established, while putting quality guardrails in place to ensure major public funding is utilized well as opposed to incentivizing a cash grab. Essentially capping chains at their current levels also provides a sensible path to build up a system that is primarily made up of nonprofit, community-based and family-based programs.

There are plenty of areas in the economy where it makes sense to have private, for-profit provision of services. When it comes to young children, however, I think a good organizing principle is to keep profit motive as far away as feasible. One way or another, the U.S. child care system is poised to go through substantial changes this decade. It is not too early to start considering the role—or, hopefully, lack thereof—Big Daycare should play in the future.