Where Have All the Fathers Gone in Child Language Research? Dearth of Dads Must Change 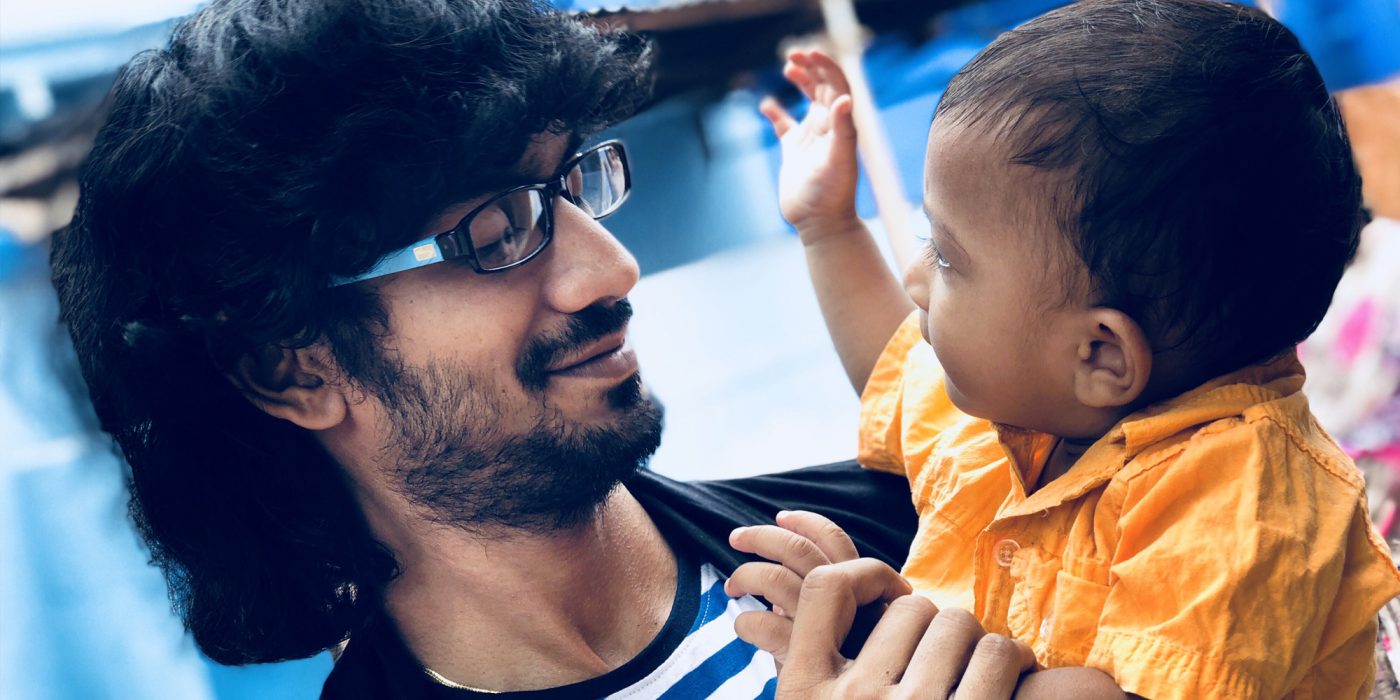 Photo by DICSON on Unsplash

In reviewing the extensive body of research on children’s language development, you might find yourself looking around for some fathers. In study after study of infant directed speech (IDS), “parents” are assumed to be mothers, and fathers are rarely included. In fact, a widely cited meta-analysis found that only seven out of 114 IDS studies included fathers’ speech. Yet, parents—in all their variations—shape the linguistic and cognitive development of every child in their household.

This dearth of dads in language learning needs to change, says Dr. Naja Ferjan Ramírez, director of the University of Washington’s Language Development and Processing Laboratory. But just knowing that things need to change doesn’t mean it will be easy.

Infant directed speech refers to the high-pitched, singsong, slowed-down way adults talk to babies that signals to them that “This conversation is for you.” Sometimes called “parentese,” it typically involves eye contact, interactive play and shared attention. Researchers agree that children’s language development is a social process; it takes place within the web of relationships and interactions that make up the child’s daily experience. Adults talking specifically to babies in this context communicate affect—how they turn their heads, widen their eyes, smile, wait for a response—and engage the infant’s attention, facilitating both social interaction and language learning.

Though research over several decades has focused largely on the contributions of mothers, a quick scan of family dynamics in the U.S. makes it clear that there’s more to the story. Women’s careers have expanded, and fathers have become more directly involved in their babies’ upbringing. With the pandemic, those demographic changes that were accelerated in many families, profoundly shifted mothers’ and fathers’ interactions within the family structure.

“In many families, due to the pandemic, Dad’s job ended up being more flexible than Mom’s, or for whatever reason (sometimes Covid-induced unemployment), fathers were home, in some cases more than mothers,” says Ferjan Ramírez. “For some families, that was a huge shift. Not for everybody, certainly, because we know women have been affected by the pandemic too. But in many families, there was a dramatic shift in the types of child care responsibilities that dads took on.”

It was an adjustment for families, she says, but also for researchers who had been asking mothers almost exclusively to bring children into their lab appointments.

“If the dads are going to bring the children in,” she says, “maybe we need to rethink the types of activities we’re asking parents to do with children when we’re studying them in the lab. Maybe we shouldn’t ask everyone to sit on the floor and read a book but should include some things the dads like to do. Why not study their language interaction during rough and tumble play or soccer, for example? Nobody has done that in the past, but we should because we really don’t know what happens.”

Fathers Have Their Own Way with Words

Including fathers in the research is essential not only because they are central to children’s web of social relationships, but also because fathers bring unique characteristics to IDS. Studies have observed that fathers use a higher number of rare words and fewer common words than mothers. Though fathers typically use fewer words with their infants, their speech is more diverse and more challenging to the child. Recent studies have found that fathers used significantly more wh-words (why? what?), asked more questions and asked for clarification more often than mothers. Posing wh-questions elicits a verbal response from the child which researchers believe helps foster their reasoning abilities in addition to building vocabulary.

Other studies have found that fathers’ use of such diverse speech was a unique predictor of their children’s overall language at 24 months and one study observed that in an economically and culturally diverse sample of families with children from 6 to 36 months, fathers’ use of wh-questions during book reading was significantly associated with children’s vocabulary when they entered kindergarten.

None of this is to say that fathers’ IDS is superior to that of mothers, but that their approach to their infants’ language learning matters and ought to be considered in the research. That may sound like a foregone conclusion, but as Ferjan Ramírez points out, it’s complicated, starting with LENA (Language Environment Analysis), the recording device that captures and analyzes conversations between babies and their caregivers. Analyzing recordings from children’s ordinary interactions with all the caregivers in their lives, LENA’s software analyzes the number of words spoken by women and those spoken by men. One large study reported that mothers accounted for 75 percent of adult words spoken around children from 2 to 48 months. However, follow-up research assessing LENA’s reliability found that when male speakers used a higher pitch to address their infants, they were more likely to be wrongly tagged as female.

Because multiple studies have noted this error, researchers looking to distinguish mothers’ and fathers’ speech are encouraged to supplement LENA with manual annotations—a process Ferjan Ramírez points out is slow, labor-intensive and expensive.

When researchers did make this adjustment, they found that mothers still verbally interact with their babies up to two times more than fathers do—a gap that’s especially pronounced in the baby’s first six months—but not 75 percent as previously reported. Researchers also found that when fathers interact one-on-one with their infants, they engage in equal amounts of IDS as mothers, but when mother comes into the picture, fathers speak significantly less. Some researchers propose that mothers act as “gatekeepers” and automatically assume the more active role with their babies or that fathers feel less responsible for holding up their end of the conversation when Mom is present. Either way, the more accurate measurement of of IDS fathers’ engagement underscores that infants learn language within a social construct, and scientific research into parents’ effect on language development needs to acknowledge these complexities, Ferjan Ramírez says.

“If you understand that Mom takes over the conversation when she’s around,” she says, “it will be important in research to make sure we sometimes study dads without mothers present, as well as studying the triadic interactions of mother, father, child.”

If fathers are to be included in language-learning research, she says, studies must be set up differently. In North America, where paternity leave is still an outlier, fathers may not be as free to come to the lab during weekday daytime hours, so labs will need to extend their hours to accommodate their different schedules. Labs also need to consider fathers’ different behavioral styles, she says. Studies have shown that fathers tend to engage in more energetic, playful, stimulating physical interactions with their children than the mother’s “smoother,” more flowing interaction.

“My husband would prefer to bounce a ball with our kids, while I might prefer to read,” Ferjan Ramírez says. “That’s not a bad thing, it’s just different styles. But what that means is that it’s not as simple as, ‘Hey, let’s invite the dads to the labs.’ We really have to rethink how we’re going to do this so dads feel welcome and valued. This means developing new protocols, which shouldn’t be based on maternal templates alone.

“But to develop a protocol for studying language during soccer play, for example, requires extra resources and additional funding, in addition to first having to convince the funders that it’s necessary from a scientific perspective.”

Ferjan Ramírez has firsthand knowledge of what an uphill battle that’s likely to be. When she sent out her review paper on fathers’ IDS and its influence on language development for peer review, one reviewer’s comments were, “Why do you care about this? Is studying dads really going to make the needle budge? Why are you even writing this paper?”

“They eventually reconsidered, and the paper got published,” she said with a laugh. “But comments like this demonstrate that including fathers in research is still not a given in academia.”

Given the dramatic difference fathers’ infant-centered speech can make in the child’s vocabulary building and cognitive development, research must do better if it’s to adequately reflect contemporary language learning. Further study might reveal significant differences in paternal IDS that current research has not discovered and could lead to coaching sessions and interventions much more finely tuned to how fathers actually interact with their children.

This dearth of research is even truer of families headed by LGBTQ parents and same-sex couples, who are under-represented practically to the point of invisibility in the research. Ferjan Ramírez’ lab will soon launch a study on infant language development in same-sex families, using LENA recordings and eye-tracking to analyze the preference for male vs. female parentese.

“Future research might consider parent gender as fluid rather than binary,” Ferjan Ramírez says, “and that’s going to require different strategies, more resources and a different approach to recruit and welcome parents to the lab. But until that’s done, we really can’t claim to fully understand the role of parents in children’s language learning.”

Dr. Naja Ferjan Ramírez directs the University of Washington’s Language Development and Processing Laboratory and is an assistant professor in linguistics and Distinguished Professor in Language Acquisition and Multilingualism Endowment.