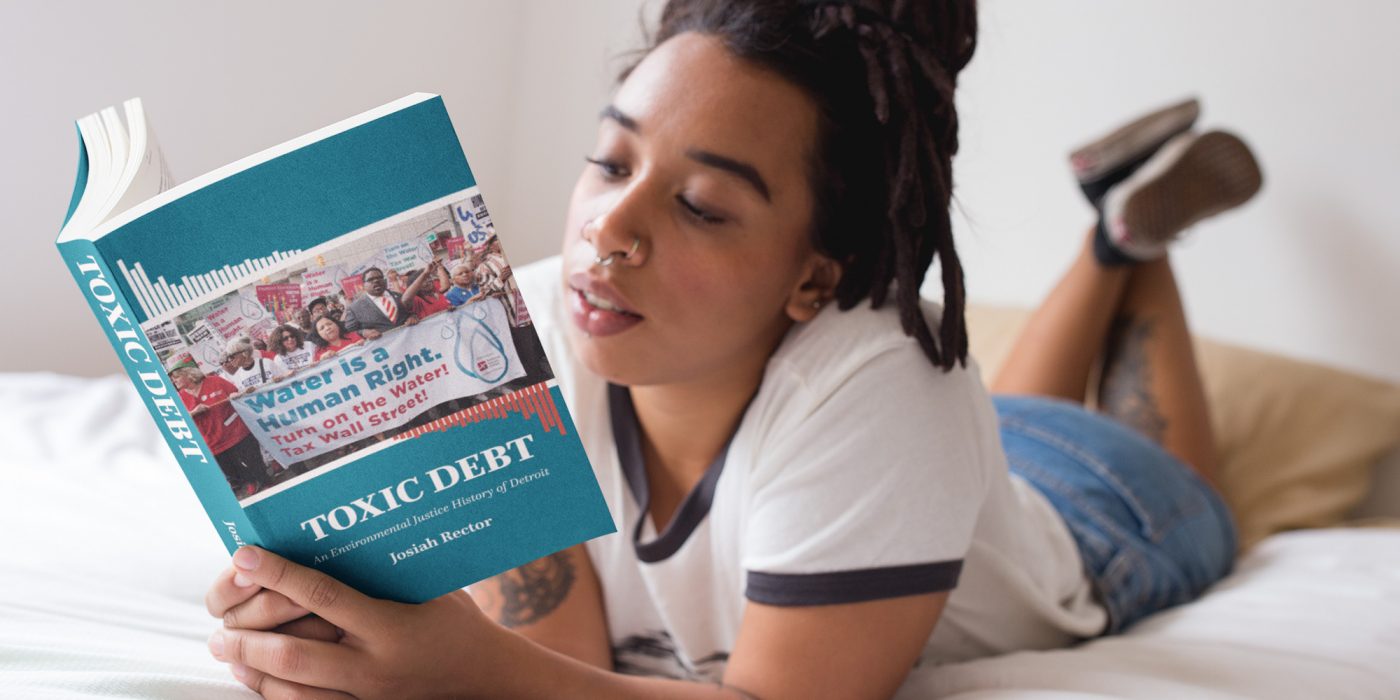 Between 2014 and 2019, the City of Detroit shut off water service for more than 141,000 residential accounts, depriving more than a quarter million people access to water—one of the most basic elements of human survival. The water shutoffs were concentrated primarily among impoverished African Americans, disproportionately affecting single mothers and their children, disabled people and elderly residents living on fixed incomes. This wasn’t the first time the city had taken such drastic, fundamentally inhumane steps. It was, in fact, the latest in a long line of utility shutoffs affecting the least advantaged people in the city.

Toxic Debt: An Environmental Justice History of Detroit, Dr. Josiah Rector’s dense, deeply researched history of Detroit’s water disasters, lays out the origin story of this most recent catastrophe. Beginning with the mid nineteenth century, Rector meticulously layers fact upon fact to detail how politics, policy and societal changes ebbed and flowed in Michigan’s largest city over multiple generations to create a witches’ brew of race, class and gender inequalities that translated into polluted water and scandalous policies. If Rector’s cataloguing of these events has a certain here-we-go-again, rinse-and-repeat quality, it’s because since the late 19th century through present day, Detroit’s history has seen incessant waves of income inequality, unregulated mass-produced industry, lackadaisical or non-existent financial regulation, environmental degradation and unrelenting racial segregation.

Is clean water a basic human right? The irony baked into this question since Detroit’s earliest days is the fact that what Rector calls the “dehydration of Detroit” has occurred in an urban area surrounded by the largest freshwater system in the world.

Along with this history of metastatic industrial development, staggering pollution, relentless corruption and breathtakingly bad policy, Rector presents the other side of the coin: the fierce, courageous, dogged commitment of activists pushing back decade after decade, demanding cleaner air, better working conditions and water that wouldn’t poison their children. Rector draws on dozens of oral history interviews and extensive archival research to tell in relatable terms what is likely the most comprehensive history of Detroit’s environmental justice movement to date.

At the heart of the issues raised in Toxic Debt is the question of whether access to water should be considered a human right available to all, or a commodity available to whoever can pony up sufficient money to pay a water bill. The irony baked into this question since Detroit’s earliest days is the fact that what Rector calls the “dehydration of Detroit” has occurred in an urban area surrounded by the largest freshwater system in the world.

Throughout the Rust Belt in the 1990s and 2000s, union busting, cuts to welfare programs and neoliberal trade policies that sent thousands of jobs to Mexico took a toll on America’s working class. For Michigan’s Black-majority cities, like Detroit and Flint, the toll was even more profound as decades of racist housing policies, white flight, and industrial and commercial disinvestment hollowed out the cities’ economic core.

Rector doesn’t mince words in laying the water disasters of both Flint and Detroit solidly at the feet of neoliberal policies of austerity, deregulation and privatization throughout the 1990s and 2000s. Wall Street shares a sizeable part of the blame as legislation during President Bill Clinton’s tenure removed the firewall between commercial banks, investment banks, securities firms and insurance companies, supercharging Wall Street’s affection for mergers and acquisitions and enabling commercial banks to make increasingly risky investments. Investment banks marketed high-risk “swaps” to cities and Detroit, among many others, took the bait.

In 2013-2014, Detroit declared bankruptcy, resulting in Republican Gov. Rick Snyder suspending democracy via Michigan’s Emergency Manager laws, which gave the state the power to impose economically and environmentally disastrous policies without any accountability to the residents. Snyder put Detroit under an emergency manager and imposed radical austerity measures that shut off or poisoned the water of hundreds of thousands of Americans—largely African American families—living there. (For a look at how these decisions created the public health catastrophe of Flint’s water system, see our review of Dr Hanna Attisha’s What the Eyes do Not See:  A Story of Crisis, Resistance and Hope in an American City. Different calamity, same players and policies.)

During this time, Detroit’s poor and working-class African Americans became a lucrative market for subprime loans, which treated home mortgages as a casino. Balloon fees led to out-of-control mortgage payments and as the families struggled to make these mortgage payments, they fell behind on their water bills. Rather than come up with ways to mitigate these payments, as had been done during the Great Depression, the city just cut off the spigot. As the city handled its bankruptcy—the largest in US history—it made a bargain with its creditors and bondholders. Unsecured creditors—pension funds representing thousands of active and retired municipal workers and their families—had to take what the financial wizards called a “haircut,” meaning they paid for the city’s bankruptcy while the banks and insurance companies came out fine.

Two thirds of the water cutoffs involved children. In a cruel Catch-22, child welfare authorities removed children from their homes because of a state requirement that all homes housing children have working utilities. On June 25, 2014, the UN Office of the High Commissioner of Human Rights released a statement calling Detroit’s policy for shutting off people who couldn’t pay “an affront to human rights.” Protesters took to the streets demonstrating against the shutoffs and blockaded the dispatch facility to stop the trucks leaving to perform shutoffs.

UN officials visiting Detroit at the invitation of the Michigan Welfare Rights Organization and the Michigan Coalition for Human Rights found examples of the indignities families suffered from the shutoffs, such as the mothers whose daughters had to wash themselves with bottled water during their periods, parents with asthmatic children who couldn’t operate nebulizers without water, families unable to adequately bathe themselves and clean their homes. The UN experts said the shutoffs violated international human rights laws including the right to water and sanitation, and the right to non-discrimination.

Two thirds of the water cutoffs involved children. In a cruel Catch-22, child welfare authorities removed children from their homes because of a state requirement that all homes housing children have working utilities.

Even as the infamous Flint water crisis unfolded, Gov. Snyder’s policies were contributing directly to increased lead poisoning among Detroit’s children as well. Austerity cuts to the Department of Health and Wellness led to the department ending its lead abatement program, despite evidence of “pervasive exposure” to lead among the children of Detroit—nearly twice the level in Flint. According to the Centers for Disease Control and Prevention, no safe blood level of lead in children has been identified and even low levels of lead have been shown to negatively affect a child’s intelligence, academic achievement and ability to pay attention.

Austerity measures and outsourcing also led to a toxic water disaster in Detroit’s schools, as hundreds of the district’s unionized maintenance workers were laid off, accelerating the physical decay of its buildings. In 2016, Detroit Public Schools officials discovered toxic levels of lead and copper in 19 out of the district’s 62 tested schools. As Rector writes, “Far from fixing DPS, austerity policies had transformed centers of learning into sources of permanent brain damage for unknown numbers of children.”

It would be satisfying to report that these matters are all safely in the past and Detroit residents have finally gotten a fair shake and fresh water. Sadly, that is not the case. In March 2020, Gov. Gretchen Whitmer responded to activists’ demands for action by issuing an Executive Order requiring that all public water utilities restore water service to any residence where water had been shut off due to non-payment. The policy would only last through the end of the pandemic. Detroit has extended the shutoff moratorium through 2022 but has shown little support for progressive water rate structures.

Rector writes that the water disasters of Detroit and Flint demonstrate the “horrific human costs of sacrificing basic environmental health protections to the short-term financial interests of bond-holders and private contractors.” A major takeaway of Toxic Debt is how misguided the free-market approach to public services is. Privatizing has an incredible allure to investors, but “efficiencies” most often lead to underfunding the resources necessary for the long-term health and viability of an economy and a society. Public systems should be accountable to the public.