Book Review: The Extended Mind: The Power of Thinking Outside the Brain 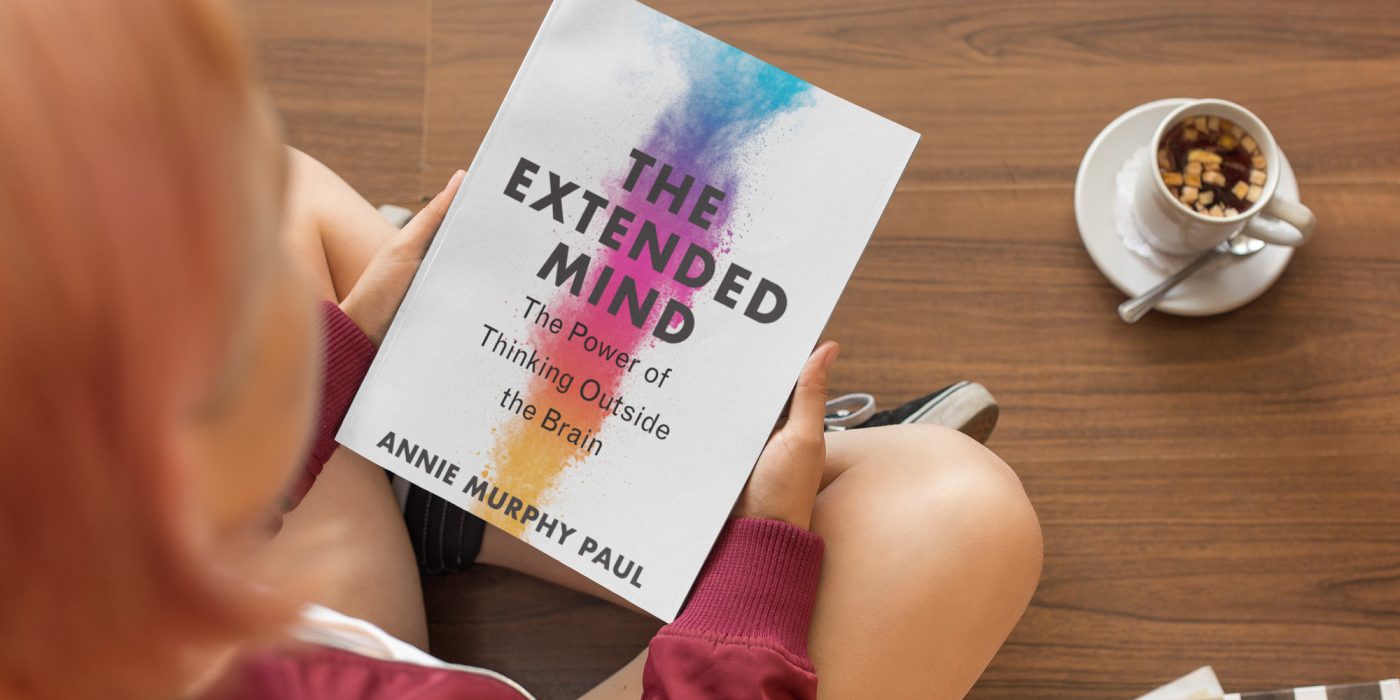 Annie Murphy Paul
The Extended Mind: The Power of Thinking Outside the Brain
Houghton Mifflin Harcourt

When we imagine ourselves thinking hard about something, we most likely see ourselves hunched over a book or staring into our computer screen, intently locked into some version of “bearing down,” “leaning in” or “pushing through” to somehow browbeat our brains into completing whatever task we’re demanding of it. We’d be better off, according to science writer Annie Murphy Paul, lacing up our running shoes and loping through that woody park across the street, hopping up and dancing until our sweats earn their name, or meeting a friend for coffee and arguing the main points of that thorny problem we’re facing.

In The Extended Mind: The Power of Thinking Outside the Brain, Paul effectively makes the case that most of the metaphors we have for cognition are not useful because they allude to Western society’s assumption that thinking only happens inside the brain: the ubiquitous admonition to “use your head.” Our scientific journals, she writes, mostly proceed from the “brain in a vat” premise that considers our mental organ a disembodied, asocial entity, a computer encased inside our skulls doing all the thinking for a body that barely registers in the hierarchy of value.

The reality is much richer, more complex and delicious. And while it might seem overblown to call a book on cognition “revolutionary,” the ideas in The Extended Mind actually could change everything.

We’ve been led to believe, Paul writes, that like the Mighty Oz, the brain is an all-purpose, all-powerful thinking machine—and it is impressive, what with its lightning processing speed and its magnificent mutability. But it turns out, the brain—not just my brain (huge relief!) or your brain—is limited in its ability to pay attention, to remember, to deal with abstract concepts and even to persist at challenging tasks. So much for bearing down.

The smart move, she writes, is not to lean harder on the brain but to reach beyond it. Replace the brain-as-computer and brain-as-muscle metaphor with a more fitting one that compares our brains to, say, magpies. Like the magpie—famous for building its nest out of an astonishing array of materials it finds throughout its environment—our brains weave the bits and bobs of everything they encounter and turn them into cognition. We think with our bodies, our surroundings, our relationships. We think with gestures, with movement and sensation; we think with natural and built spaces, and the spaces we build with our ideas. We think with the other minds with which we interact—our family, coworkers, classmates, teachers, friends.

As Paul explains the new research into these three types of thinking—embodied, situated and distributed cognition—she convincingly and entertainingly makes the case that the research “not only produced new insights into the nature of human cognition; it has generated a corpus of evidence-based methods for extending the mind.”

Then, she goes a step further and lays out the purpose of her book: to operationalize the extended mind. To turn the discussion from something strictly philosophical into something practical and useful. If, when you reach the end of this book, you don’t view yourself and the world at least somewhat differently, well … I invite you to give it another read. And maybe dance more.

Contemplating what this new view of cognition might mean for early learning had me going overboard on the marginalia—with multiple exclamation points (Imagine having kids “act out” the solar system! Children play more imaginatively outdoors—cheers for forest schools!!!). First, as Paul mentions several times, children already come into the world with their thinking extended in these “new” ways. They certainly think with movement and with their relationships—and continue to do so until our education system succeeds in getting them to sit down and stop talking. Children spend an average of 50 percent of the school day sitting, Paul writes. That proportion increases as they enter adolescence; adults in the workplace spend more than two-thirds of the average workday seated—all rooted in society’s erroneous belief that to be thinking, we need to be sitting still.

What this attitude overlooks, she writes, is that human’s capacity to regulate our attention and our behavior is a limited resource and we use it up by suppressing our natural urge to move. In multiple experiments, children who were given license to move were “more focused, confident and productive.” One study of young people diagnosed with ADHD found that the more the kids moved, the more effectively they were able to think. Instead of insisting that children stop moving so they can focus, a more effective approach would be to allow them to move around so that they can focus. Throughout the U.S., recess has been reduced or even eliminated to generate more “seat time” devoted to academic learning. Paul argues that parents, educators and administrators should be arguing for more, not fewer, opportunities for children to be active.

One of the most profound and possibly revolutionary concepts Paul covers is that of interoception, an awareness of the inner state of the body. All of us start life with our interoceptive capacities operating via our onboard sensors taking information from the outside world—our retinas, cochleas, taste buds, olfactory bulbs—which send a constant stream of data to the brain from all over our bodies. Our conscious minds can’t process all they encounter, but the insula, the brain’s interoceptive hub, takes the constant data feed and uses it to navigate the world: the body “rings like a bell,” Paul writes, to alert us with a shiver, a sigh, a cringe.

Research has found that that how caregivers communicate with children about these bodily prompts can strengthen or weaken a child’s sensitivity to these internal signals. Other research has found that greater awareness of these sensations can give us agency in actually creating our emotions. Consider, for example, the difference in a child’s life if their caregivers took their sensations seriously and helped them learn to reappraise their physical sensations—my palms are sweaty; my stomach has butterflies—and label “nervous” or “anxious” as “excited” and “eager.”

Some of the most exciting and potentially transformative research cited in The Extended Mind is found in the chapters on thinking with relationships. Humans evolved to learn from other humans and to learn from teaching other people. We are social to our core and a large body of evidence points to the striking conclusion that we think best when we think socially. We evolved to reason, to persuade others of our views and to guard against being misled by others. If you ever wondered why your preschooler can argue you into exhaustion, they’re only fulfilling their evolutionary calling. Humans argue together, Paul writes, to arrive jointly at something close to truth. The key element is learning to argue over ideas with mutual respect. Argument, when done in the right way, produces “deeper learning, sounder decisions and more innovative solutions ….”

Our modern life has gotten too complex, too jammed with information and sensory overload for our brains to manage by themselves. Fortunately, we’re just beginning to realize how far and how well humans can think beyond those limitations. Taking Paul’s information-packed volume as a starting place, it’s thrilling to imagine what futures might be concocted by a whole society of magpie minds thinking together in ways informed by, but no longer bound by, the human brain.