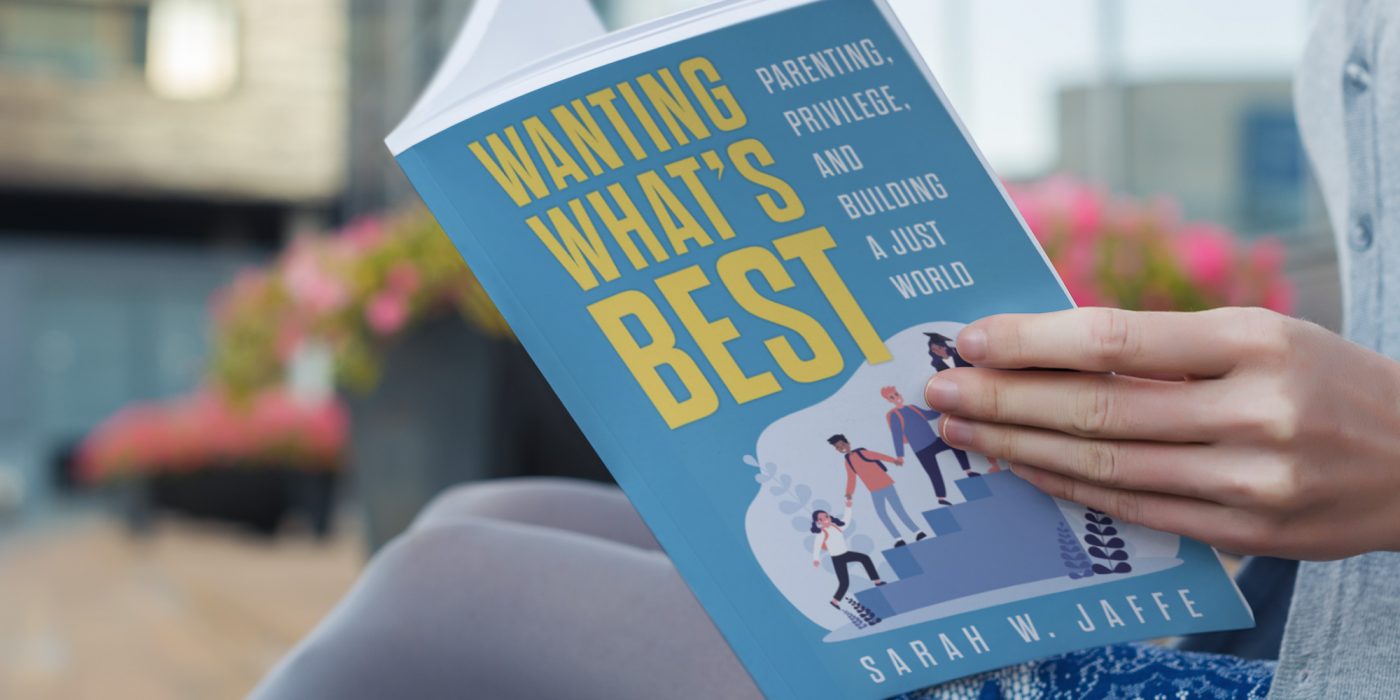 When Sarah Jaffe set out to write Wanting What’s Best: Parenting, Privilege, and Building a Just World, she didn’t want to add to the body of “burnout literature” justifiably responding to the impossible standards and perils of modern parenting at the intersection of surviving the pandemic and living in a society that pays lip service to family values without actually valuing families. She did want to write a book that shone a light on the inherent inequity of privileged parents wanting to “just get/do/have what’s best” for their children, and she’s done that with great skill.

Every parent on some level wants what’s best for their children. Only a privileged few have the means to pursue that goal—frequently at the expense of less-privileged children, though they may never be aware of the price that’s been extracted. That’s the hard news in this kind-hearted book. The thing left unsaid when privileged parents say they want what’s best for their child, Jaffe writes, is “and not for other children.”

The book is both an unflinching invitation for parents of privilege to do better and a roadmap for how they can use their privilege to see to it that all children have what’s healthy and what’s best.

Jaffe doesn’t blame parents of privilege—a category to which she belongs—for the terrible circumstances of other children’s lives, but she does make clear that we all have a responsibility and a role in creating and perpetuating that disparity. Her book is directed primarily at parents of privilege, which she defines as “any family who writes down six or more figures on the ‘total household income’ line of their tax return,” and it is both an unflinching invitation for them to do better and a roadmap for how they can use their privilege to see to it that all children have what’s healthy and what’s best.

In interviews with child care and policy experts, parents, labor activists, attorneys, nannies, educators and others, Jaffe methodically lays out the reality of inequity that saturates every molecule of the U.S. child care and education system, starting before a child even comes into this world. (In Seattle, she writes, families trying to get on waiting lists for daycare may see an option for “trying to conceive.”) The conversation she has with her readers isn’t accusatory or scolding, but there’s no softening of the fact that it’s a hard conversation to have—and one we all must engage in if we have any hope of our children living in a just and equitable world.

Jaffe starts her story with the birth of her daughter in September 2017 when she joined a listserv for parents in her Park Slope neighborhood of Brooklyn. The daily meetups for these women and the occasional man were friendly, calm affairs dotted with small talk about babies’ sleep schedules and other minutiae of day-to-day life with an infant.

The listserv was an entirely different kettle of fish, with 30-part threads dissecting the many and varied ways the parents could get it wrong. The abiding theme was “worried”—If you skip the iron-fortified cereal, do you worry about your baby getting enough iron? Every conversation presented a new variation on the theme, things Jaffe had never even considered worrying about. Iron? Do I need to worry about that now?  But worry was in strong competition with the listserv’s other theme: getting the best for their child—the best waffles, the best teething necklaces, pediatrician or strollers, the best pre-K. The best life.

The conversation gave her a sense of whiplash, Jaffe writes. She was working as an attorney for a nonprofit law firm that brought lawsuits on behalf of children in foster care; one of her responsibilities was to read fatality reports of children who died in foster care after their state’s government already knew they were in danger. Finishing her workday immersed in questions of abuse and neglect, opening her computer to the litany of worries from the privileged parents of Park Slope felt like a “fable about the children in the city I lived in.”

Acknowledging how hard it is for just about anyone to be a parent in the U.S.—the only high-income country in the world without paid leave for new parents, where child care costs more than the average mortgage payment, schools are chronically underfunded and “our college admission process is reminiscent of “The Hunger Games”—Jaffe is sympathetic to the challenges. But the point of her book is not to comfort the comfortable; It is to paint a clear picture of the country’s two-tiered system between the top 10 to 20 percent of income earners and everybody else. Outcomes for children not born into one of those top brackets are vastly different from the privileged few: Racism is at the root of that inequity. The practical outcome of parents with privilege relentlessly pursuing their own child’s interests—hoarding resources within the public school system, for instance, or maneuvering to keep their children (and their resources) out of majority low-income, majority Black and Latino schools—leaves other children behind.

Beginning with early childhood, Jaffe looks at the child care system’s deep segregation by race and class. Because the U.S. has no child care infrastructure, she writes, most parents have little choice when finding their young child’s care, but parents of privilege have the option of touring various programs and finding the best among choices. Low-income families are relegated to publicly funded programs in a fractured system. Families in the middle struggle to make the “least bad” choice among limited options. No one asks about the wages and benefits of the child care workers and pre-K teachers in any of those choices, and few of us ask about the structural forces that have created this impossible situation.

It would matter if we did, Jaffe writes, and then offers a list of questions to prompt that conversation, a format she follows in each chapter with takeaways detailing individual choices, collective action and further reading for readers wanting to act or to find out more about that chapter’s issues. You can’t read “Wanting What’s Best” without gaining a clearer understanding of the inequity baked into everything concerning children’s lives in the U.S. and without seeing at least some way to take action precisely where you are.

Throughout “Wanting What’s Best” Jaffe reiterates the fact that even though individual choices matter, the solution to fixing our broken system doesn’t lie with any individual. The U.S. has no cultural understanding of child-rearing as a communal activity and doesn’t acknowledge the commonsense reality that everyone in our society benefits when every child has enough to eat, a safe place to sleep, loving adults to care for them and good schools to educate them—the best, in other words.

“But collective action,” she writes, “particularly when it’s undertaken by people with privilege, creates change. Decisions about child care, schools, and how we use our time and money may not feel like political decisions, but they are.”

What would it look like, she asks, if we fought for other people’s children as if our own children’s future depended on it?