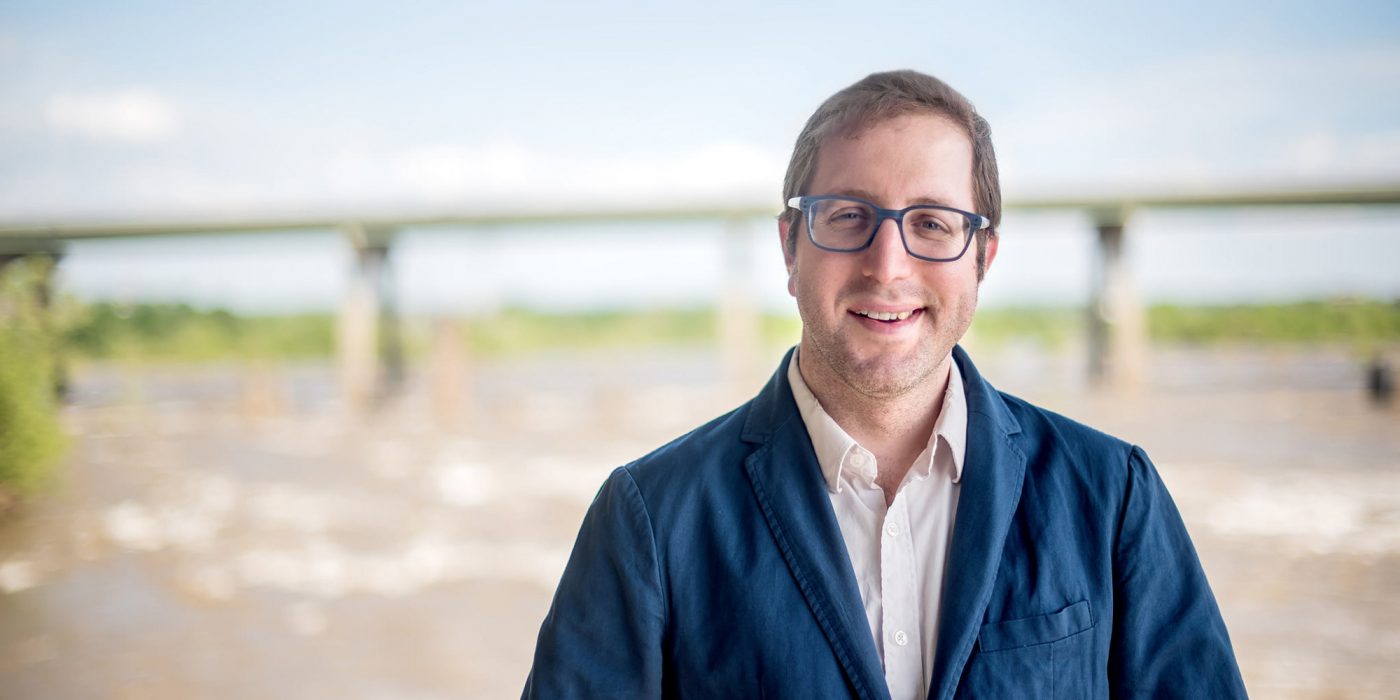 Early Learning Nation columnist Elliot Haspel recently joined Capita as a Senior Fellow working on establishing a new philanthropic fund focused on the intersection of early childhood development and climate change. We spoke to him about his new role.

How do you explain your job to people outside the early childhood policy world?

This is a broadening of my child care work—and let me be crystal clear, I’m still fully in that fight!—because I think there is a generational need and opportunity to address the early childhood-climate connections, and thereby strengthen both movements. The effort, which we’re currently calling the Childhood Climate Fund, will grant both within the U.S. and globally. While the details are being fleshed out, we will likely focus on helping child-serving systems adapt to the impacts of climate change (think: air quality in child care programs, or doula access for pregnant women in climate-threatened areas), strengthening parent climate movements, and ensuring via communications that young children and their families are centered in the public mind around climate.

The Fund is only being incubated at Capita for the next 12 months—Capita isn’t designed to be a major philanthropic funder—and then it will spin off to be its own entity, likely living underneath a philanthropic fiscal sponsor agency like other major pooled funds from the CARE Fund to the Oceans 5 Fund.

"Neither of those futures looks all that likely now, with the most terrifying predictions made improbable by decarbonization & the most hopeful ones practically foreclosed by tragic delay." –@dwallacewellshttps://t.co/d6lOMNVL09

Capita is a wonderful think tank that focuses on the big questions about the future of human flourishing. They have a particular focus on young children and their families, and two of their major work streams surround child care and climate change, so it was a natural fit for building out the Fund concept. I’ve collaborated with Capita for many years and you’d be hard-pressed to find a more thoughtful, future-oriented team.

What do you wish the philanthropic sector (and/or the media) understood better about the intersection of ECE and climate?

The climate change era puts a ceiling on everything else we’re trying to do to improve young child and family well-being. Addressing it from an early childhood perspective can also bring enormously important attention and resources into the early childhood field. It’s part of how we win a better child care system, by tying together the fates of caregiving and our climate future.

The first thing I wish more philanthropists understood was that young children—I’m talking from prenatal to age 8—are uniquely vulnerable to climate change in ways even tweens and teens aren’t. I didn’t know all this until I started digging in, but a much higher proportion of young kids’ bodies (as much as 78%) is made up of water! They also breathe in and out three times more often per minute than you or I. They experience worse psychological damage from natural disasters and displacement. Evidence is increasing that exposure to climate stresses has impacts in utero. Add the sensitive developmental period we know early childhood to be—plus the communities we know get hit hardest—and you quickly start to put the picture together.

If you’re a philanthropy that cares about, say, school readiness, you can’t look at heatwaves, wildfire-driven air pollution, climate-enhanced storms, and go on about your business.

Great to see New Jersey pioneer a climate change curriculum! Smart to include not only age-appropriate education about the planetary emergency but also about green careers, providing kids both information and agency. Hope every state follows suit soon.https://t.co/TEnzoCdy1M

What do you accomplish by combining forces between early childhood and climate?

One of the untapped ways we can combat climate change is by activating parents as a mass force for change, since those kids are too young to be doing climate strikes. That’s my pitch to climate funders: there is a shockingly latent power base made up of tens of millions of parents, but we’re going to have to enter through the door of kids and childhood to reach them. At the same time, a strong, mobilized force of parents of young children—hmm, that sounds pretty useful for fighting for an effective and well-funded child care system, doesn’t it?

Similarly, we have an opportunity to bring new constituencies into the early childhood fold. Greening child care programs and schoolyards, ensuring good shade and park equity, creating what Tim Gill calls “urban playgrounds” with lots of green car-free zones where children have safe mobility—you don’t have to start as an early childhood stakeholder to care about those things, and they end up hugely benefiting young kids, entire communities and the overall climate. We can look to some international early childhood advocates for guidance here. In particular, the Asia-Pacific Regional Network for Early Childhood (ARNEC) and African Early Childhood Network (AfECN) have been leaders on the intersection.

How do we fight climate fatalism?

I think we have a more hopeful story to tell than most people think. We can hold both ideas at once: that this is the most urgent threat of our lifetimes and the greatest threat to our children and future generations, and that major progress is being made and we have an opportunity to create a world that is more family-friendly and promotes human flourishing. This is doubly true for parents who can easily get overwhelmed and experience cognitive dissonance thinking about the impact on their kids. If you asked people, just based on climate coverage, what direction U.S. carbon emissions were going in, how many would be able to tell you they’ve been going down? That many of the truly worst-case scenarios are increasingly unlikely? How many folks understand that renewables like solar are becoming vastly more competitive by the day? That major cities like Paris and Lima have started to shut some streets near schools to cars or reclaim large amounts of green space as they pursue a more sustainable future?

That’s been a real shift in just the past few years. The older youth are incredibly active around this issue. Companies and nonprofits and philanthropies are all realizing they are going to have to reckon with climate. It’s a heady time in that respect. There’s a quote I like from The Atlantic’s Robinson Meyer, who wrote recently that “the fight against climate change is going to change more in the next four years than it has in the past 40. The great story of our lives is just beginning. Welcome aboard.”

It’s tricky to hold both ideas, of course—you can slip very easily into unwarranted techno-saviorism (‘oh this is fine, we’ll just engineer our way of the problem’)—but I think the more we explain the urgency and the hope in the same paragraph, the more parents will find a role for themselves in the movement.

ICYMI: new research from @capita_social & @ThisIsPlanetEd shows 64% of Americans feel youth are moving into a world filled with problems and threats vs. possibilities and opportunities. The need for action is a livewire waiting to be tapped! Learn more:https://t.co/sPLNA8BNFQ

What if, in getting more serious about climate goals, we lose sight of other priorities–equity, access, etc.?

I think we have to approach this from an abundance, not scarcity, mindset. As I laid out earlier, I think there is huge upside for the early childhood movement in allying with a powerful, better-funded climate movement. And making the necessary changes for adapting and mitigating climate change will be major boons for child development. Whether we like it or not, climate change is injuring early learning access and equity and everything else. Not just the impacts on kids themselves, which are massive, but damage to the child care infrastructure itself: when programs flood out or burn down, that’s a huge blow. And we know which neighborhoods are most susceptible to flooding, for instance.

On the flipside, the communities and organizations the Fund will support are primarily those most impacted by climate change, so this effort will naturally flow resources to communities—both in the U.S. and globally, especially in the Global South—often shut out from substantial philanthropic support.

Very important new research: talking about climate change in the context of children is a vital — and winning — message! https://t.co/lDyBTfVJp9

How do you make sure you’re adding value to the philanthropic efforts of both early learning and climate change?

One of the big ideas behind the Childhood Climate Fund is that we don’t want to distract philanthropy—either early childhood or climate funders—from the good work already under way. The nexus of the two shouldn’t be an add-on or afterthought; that won’t help. The most effective path is having a funding vehicle dedicated to the intersection of early childhood and climate change, and which can thread learnings and lessons back to each movement. While we’re not going to grant our way out of the climate crisis or the child care crisis, I truly believe that targeted philanthropy can catalyze huge change and galvanize a new force for good.