By The Editors
ConversationsELN Studio
on November 23, 20188 min read 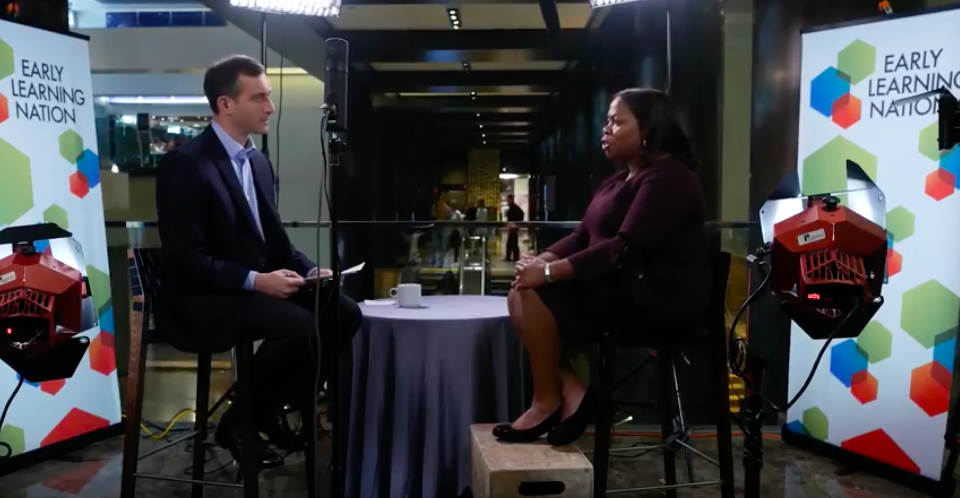 Tonja Rucker, program director for Early Childhood Success at the National League of Cities, discusses the universal message crossing partisan divides, all sectors and audiences, that to have vibrant, thriving cities, families must be strong. Watch to learn more.

Early Learning Nation: Tonja, welcome to the ELN Studio. Thanks so much for coming.

Tonja Rucker: Glad to be here today with you.

Early Learning Nation: You are Program Director of Early Childhood Success at the National League of Cities, connect those for me, if you would. Early childhood success and the Cities, how does come together?

Tonja Rucker: The National League of Cities, our members are actually city governments, and so our members are mayors, city council members, city managers, folks that are governing over cities. All of our members are concerned about governing over thriving, vibrant cities. In order to have a completely successful city where everybody’s doing well, you have to consider the needs of your youngest resident, young children.

Our members are really concerned, the science, the data, that talks about the importance of the early years has really resonated with our members. They know that if they want all of their residents to thrive that they have to start with their youngest. They’re looking into ways that they can use city hall and leverage their bully pulpit to advance a strong agenda for young kids and their families.

Early Learning Nation: How do you get their action? I can understand how you get their attention, all right, you just said something to me and if I’m mayor of a town, how can I not listen to that? At the same time, I’ve got infrastructure problems, I’ve got crime problems potentially, I have housing problems, I have this whole host of problems, how do you get them to yes, of course, have interest, but turn that interest into action?

Tonja Rucker: As you said, if you’re a mayor or a city council member, you see your residents every day, and you have to be responsive to their needs. I think the thing that distinguishes from talk to action is the science. I think the data is critical. I think we’ve seen amongst our members the data around neurons, the first year of life, how the brain development, architecture of the brain forms. Mayors really understand that if you don’t support and invest in those critical years, then the investments later are much more costly. Families are saying, “We need support, we need help around childcare. What are some strategies that we can use so that we can raise our kids and be successful in our neighborhoods?” So, I think it’s the combination of that responsivity of being in touch one-on-one with your residents, but also just the science and data that’s really important, and that we turn on investment early.

Tonja Rucker: Oh, most definitely. And part of what we do in the National League of City is that parent voice. Certainly, as you think about policy agendas, we have great ideas, but those ideas have to be informed from parents. Having community cafes, having community conversations and being out in neighborhoods, our members are hearing directly from residents, and whether it’s parents or grandparents, you’re hearing across the board whether it’s the low income or moderate or high income families, you’re hearing the need that families have to be strong if you want a vibrant, thriving city. You hear that and the mayors are stepping up to the plate and being leaders and champions.

Early Learning Nation: They’ve got to be your best spokespeople. The parents and grandparents and the caregivers. I’m also very interested to hear that it’s the science data that’s motivating because I would have, if you had made me guess, I would have thought that, well, they want to see policy outcomes, but those policy outcomes might be years in the making, I would think. So, it is the real science data that’s actionable for them.

Tonja Rucker: Oh, it is. It’s very much. I think elected officials are in office for seasons of time, and I think everybody wants to leave a legacy and kind of put their flag in the ground around what’s really important. To move the needle in early learning takes time, but I do think there are some short-term goals, some things that you see very immediate. Certainly, the engagement by the community is something that you can see more immediately. We can really get the word out, and we’ve done that with the support of our partners at the National League of Cities, and we have seen tremendous results.

Early Learning Nation: Let’s get tangible, let’s talk about some real examples. You were kind enough to write a column recently for EarlyLearningNation.com, and it was titled ‘How U.S. Cities are Leading the Way to Support Early Learning.’ How are they doing that?

Tonja Rucker: I think what we’re seeing is that our members are really working across the aisle, I think we’re seeing the needs of families outweighing political affiliations or past historical and cultural divisions. It’s about mayors leading and using their bully pulpit to bring partners together. We’ve seen mayors reach across various sectors, reaching out to the folks in Health, Juvenile Justice, the business community, the faith community, and really leveraging their office and city hall as the convener to bring all key partners together.

As we think about building an early learning nation, we can’t do it alone, city hall cannot do it alone. We’ve seen mayors really reach out to superintendents of the K12 system and really initiate conversations and strategic planning. We’ve been so pleased to see that as cities develop their priorities, they’re doing that being informed by these various stakeholders in the priorities of their partners. The alignment of the work at the local level is really beginning to lead to some innovative practices and policies, and we’ve seen that really emerge in the last couple of years.

Early Learning Nation: Could we talk about a place where everything is up to date? Let’s go to Kansas City.

Early Learning Nation: There is Pre-K for KC, an initiative, it will generate $30 million annually to offset pre-K tuition cost for eligible families. How did that come about?

Tonja Rucker: I’m so excited about Kansas City. I think one of the key components of why they’re in this space right now is leadership of Mayor Sly James. He has just been an amazing champion. He has a technology bent, so he’s always been interested in technology. But he’s always open to where does the young kids fit into the city’s agenda? He’s been tremendous working across sectors, bringing key foundations, business partners together. He has consistently been a champion, finding ways that the city can support an agenda, where many of the community partners are doing great work, and Mayor James has been very strategic in like where can the city lead, but also, where can the city support. I think that leadership is just a key component across the nation where you see cities that are particularly in a great space. It’s the leadership and recognizing where the city can lead and where the city can support. Mayor James has been very effective and been a great champion and manager of city resources.

Early Learning Nation: They have an election coming up in Kansas City, as well. We’ll have to make sure that, regardless of who wins, early education remains at the top of the agenda.

Tonja Rucker: Well, that’s part of the leadership. I think Mayor James and other elected officials who may be terming out or may not be running again, great leadership is that you have a succession plan in mind way before your term ends. He’s been working at multiple levels to embed early learning at different places within city government. He has built a cadre of leaders, you inspire others when you’re a great leader. So, there’s leaders across the sector in Kansas City that’s poised to continue the work.

Early Learning Nation: Let me ask you about one other city before I let you go. Dayton, Ohio, the Preschool Promise Initiative. It’s building it from a small pilot, supported by county leadership, and eventually into a citywide program that’s been endorsed, to your point about executive leadership, endorsed by the Dayton mayor.

Tonja Rucker: Yes, yes. Mayor Whaley has been a tremendous champion. I think one of the things we note about her most effectively is her reach across city county structures. She has been a great partner, looking at different sectors, and she’s been thoughtful about her preschool … the preschool work. We worked with them for the past couple of years, getting them ready to get to this space.

I think the respect that she’s earned across sectors is key to why they’re doing such great work in Dayton.

Early Learning Nation: And to close out, once upon a time in public policy, city, local, and state governments were really seen as innovation labs. Are you seeing that today in the cities and can we think of our cities as early education innovation labs where the positive results can be shared?

Tonja Rucker: Certainly. At the National League of Cities, we believe that cities are the place for innovation, for solutions, that’s where you’re going to find your problem solvers. I mean, I think partly because you see your constituents every day, and mayors across the city and city mangers and select council members are rolling up their sleeves for … “We’ve got to figure this out.” In doing so, these amazing partnerships that are being created, strategic plans are being formulated with buy-in from the entire community, parent voice is lifted up, and we’re seeing great results at the city level.

I think, and I can speak on behalf of all of my colleagues at the National League of Cities, that cities is where it’s at, and we’re going to continue our work with our members and work with our partners and with the support of our foundation supporters, continue the great work across the nation to support all kids and all families.

Tonja Rucker: Thank you for having me. It’s great to be here with you today.