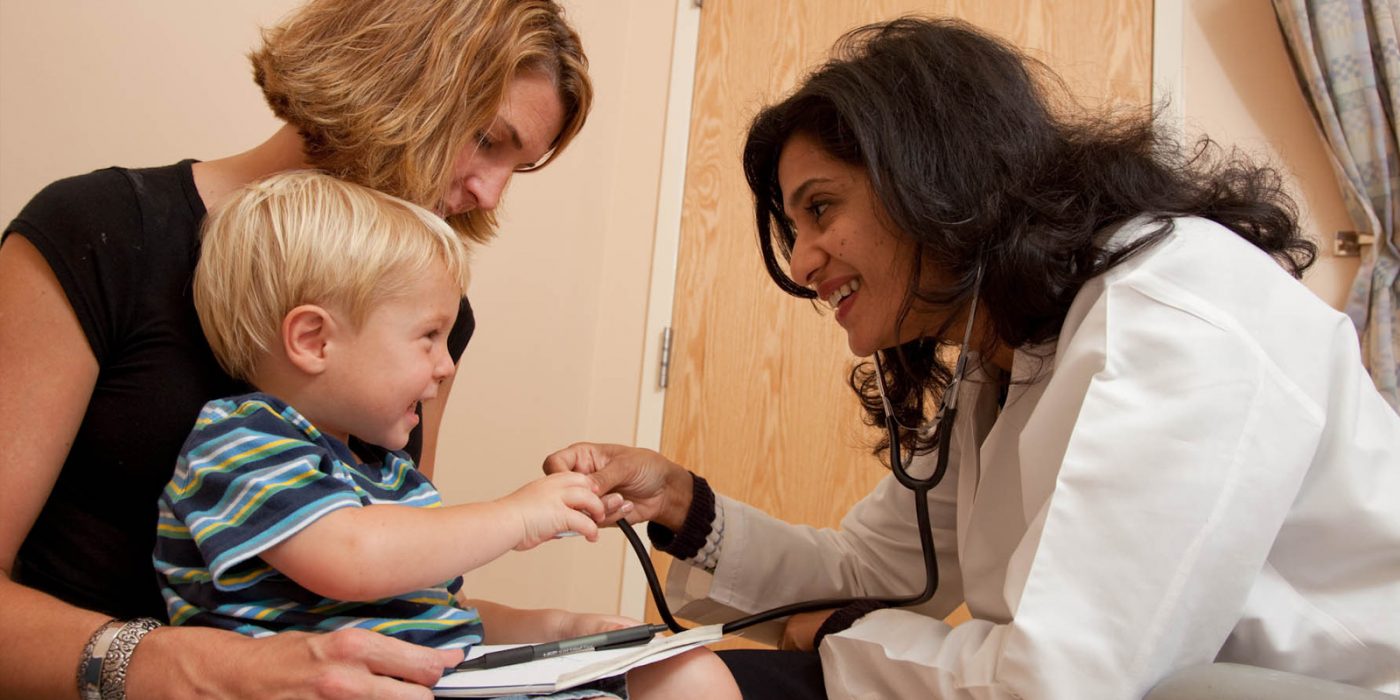 The idea is so logical it almost goes without saying: It is better, smarter and more efficient to handle small problems than to ignore them until they become big problems.

That logic seems to have gotten lost lately when it comes to insuring children in the United States. For the first time in nearly a decade the number of uninsured children in the U.S. has increased, despite numerous studies linking coverage of kids to better outcomes for children, families and society.

In some states, it’s the country’s youngest children who are losing coverage fastest, despite the fact that they are the ones who need it most — and for whom it makes the greatest, longest-lasting difference.

Elisabeth Wright Burak, Senior Fellow at Georgetown University’s McCourt School of Public Policy’s Center for Children and Families (CCF), coauthored a recently released study detailing the alarming rise in the number of children under age 6 who have no insurance coverage. For decades, Burak says, the U.S. had experienced a consistent annual decline in the number of uninsured children. Beginning in 2016, that trend reversed and now, loss of health coverage threatens to erase many of the positive coverage gains made until that time.

“Typically, the younger the child, the greater the need for coverage,” Burak says. “The American Academy of Pediatrics recommends at least 15 well-child visits before a child reaches 6, with visits more concentrated in the first two years of life. States have historically had higher eligibility levels for public programs like Medicaid and CHIP (Children’s Health Insurance Program, a federal program for families that earn too much to qualify for Medicaid but not enough to buy private insurance) during these years because it’s been understood that this coverage is so important.”

The multiple interactions with a pediatrician or family doctor provide more than medical coverage, she says. Check-ups can provide a way to check in on family circumstances such as a parent’s depression or financial hardship. Insurance coverage is the first step in making sure children’s health concerns are addressed as early as possible and that the child receives needed vaccinations and other preventative care.

“One of the things our report shows is the connection between parent health coverage and children’s health and coverage,” Burak says. “If a parent has health insurance, they are more likely to have health insurance for their children as well. It makes a difference for parents’ ability to be the best parent they can be because they are getting their health needs met and they don’t have added undue stress over an unpaid medical bill, or an emergency-room visit they can’t afford.”

The importance of continuous healthcare coverage for children has long-term consequences, Burak stresses.

“Medicaid in particular is associated with better health outcomes for both children and adults,” she says. “It’s also associated with better outcomes such as high school graduation, college graduation and higher earnings as adults. That makes sense if you consider it because, for example, there are conditions and diseases that can be life-altering if they aren’t treated. The earlier you catch them, the better.

“I worked in Arkansas over a decade ago and we would hear stories from families who said things like, ‘I’m so grateful for our ARKids First (Arkansas’ Medicaid and CHIP program) because we couldn’t figure out what was going on with our grandson. When we were able to get tests, we found out he had some serious hearing problems. We got him some help and he was able to start school ready.’

The upshot to this confluence of discouragement is that more than one million children lost their Medicaid or CHIP coverage in one calendar year from 2017 to 2018 and CCF’s research indicates that things will likely get worse for children before they get better.
“Can you imagine if that child had not gotten those hearing tests and that intervention and tried to enter school not knowing the problem? You’re not only hurting that child and their health by letting things get more complex, you’re affecting their ability to learn in a classroom and make progress.”

Children experience rapid brain development and social, emotional and physical growth in the early months and years, which means the window for addressing developmental or health challenges is crucial—full of great vulnerability and opportunity. It would stand to reason that governments would want to take advantage of these highly concentrated years to provide society’s children with the best possible start in life.

Beginning in 2016, the precise opposite began to happen in the U.S., with coverage losses widespread throughout the country. Though no state showed a decrease in the rate of young children without coverage, 11 states (Alabama, Florida, Georgia, Illinois, Kentucky, Missouri, Ohio, Tennessee, Texas, Washington and West Virginia) showed a significant increase in the rate and number of uninsured children. Only Minnesota saw a decrease in the number, though not the rate, of children without insurance.

The fact that this rise in the number of uninsured children has occurred at the same time the country is experiencing economic growth and low unemployment is perhaps one of its most incongruent aspects. If rising tides lift all boats, why are our most vulnerable families and children continuing to sink?

A host of national policy decisions have undermined the previous years of progress, Burak says. The efforts in 2017 to repeal the Affordable Care Act, along with a months-long delay in extending CHIP, as well as the Trump administration’s cuts to outreach and enrollment programs designed to help families navigate their coverage options created confusion among parents and caregivers that likely kicked children off public health insurance — namely Medicaid and CHIP — that they remained eligible to receive.

Another chilling effect has been the Trump administration’s policies and rhetoric targeting immigrant families, which has deterred many parents from signing up their children — even those who are citizens and eligible — because the parents are afraid of being deported or getting into legal hassles regardless of their status. This unwelcoming attitude is shortsighted at best because what might be a small, relatively inexpensive, treatable problem can become a life-threatening situation that leaves the family no recourse but the emergency room — massively more expensive than an insured, routine visit to a pediatrician or family doctor.

“Traditionally, these insurance programs have been an area where government programs have worked exactly as they were intended to,” Burak says. “Decades of work to provide insurance and improve outcomes though Medicaid and CHIP and then the ACA created a steady decrease in the number of uninsured children in our country. Now that’s reversing.

“The frustrating thing is that, in the world of health insurance coverage, children are by far not the most expensive to insure. If you look at healthcare spending by those who are receiving health insurance, even just looking at Medicaid, about half of its population is children and they don’t take up nearly half of the spending.”

The upshot to this confluence of discouragement is that more than one million children lost their Medicaid or CHIP coverage in one calendar year from 2017 to 2018 and CCF’s research indicates that things will likely get worse for children before they get better. Given that Medicaid and CHIP enrollment declines came during a time of economic growth, when an economic downturn occurs — and history tells that’s likely — a lot more kids will become uninsured. The numbers will continue to go in a bad direction because the policy reasons behind the decline in coverage will not end with the new year and may accelerate.

“Many states have really done a lot to invest in young kids,” Burak says. “But it’s essential that their leaders know that all the incredible investment in pre-K and early childhood programs is undermined by this trend. These children are not going to be able to thrive in pre-K or anywhere else if we don’t make it easier for families to get their basic health needs met.”

Investment in Early Childhood Learning are weakened if children are uninsured. https://ccf.georgetown.edu/2019/12/11/early-childhood-investments-less-effective-if-young-children-remain-uninsured/

A state-by-state breakdown of where each state stands with its Medicaid and CHIP coverage: https://ccf.georgetown.edu/2019/05/01/state-medicaid-and-chip-snapshots-2019/