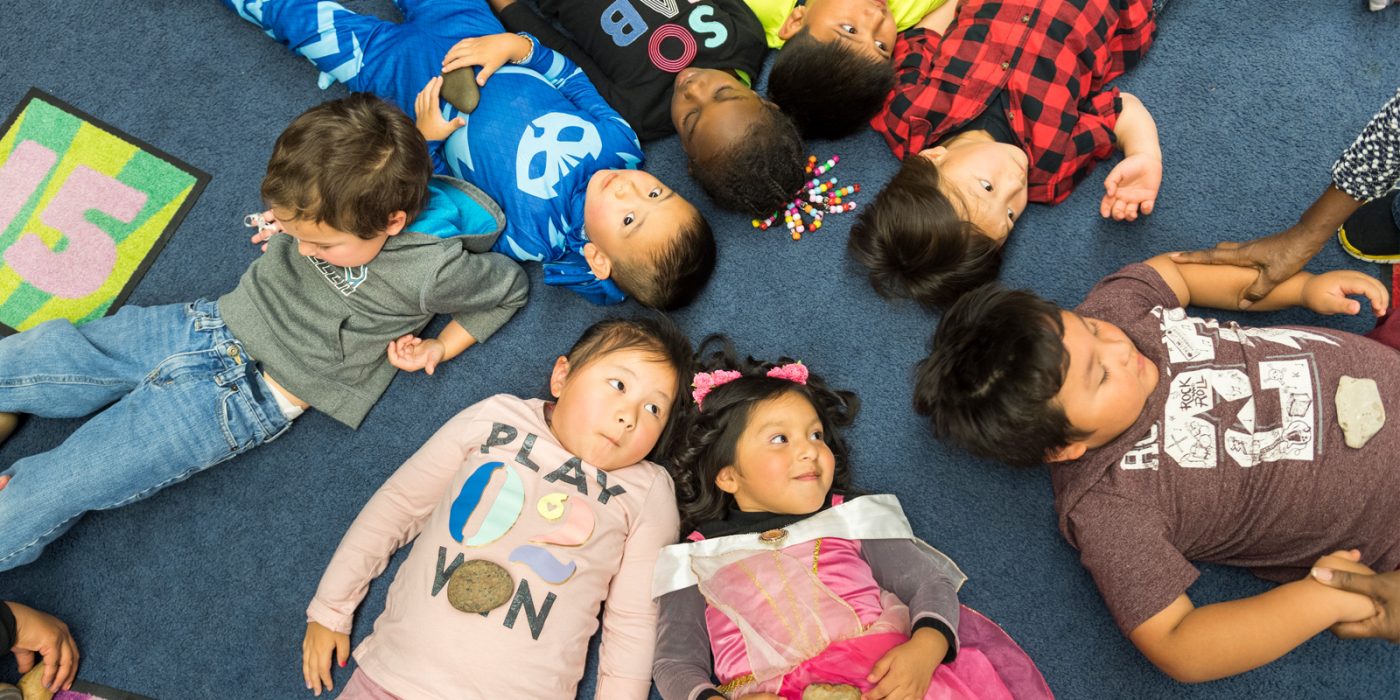 David Nevala for the Center for Healthy Minds

When some of us think about meditation, our thoughts lean toward the sound of a softly gurgling fountain, a gentle light and the soundtrack from Avatar. We don’t automatically envision a room full of wiggly preschoolers happily participating in the fundamentals of mindfulness.

Mindfulness isn’t just a way to get fidgety little ones to be quiet for a while; it serves as a means for them to be in charge of themselves—to learn to calm themselves and modulate their thoughts, behavior and emotional responses to their environment.
Not only is it possible to teach mindfulness to small children, says world-renowned neuroscientist Dr. Richard Davidson, it’s easier than teaching it to adults, and it can set them on the path to emotional and physical wellness for a lifetime.

“One of the things that happens in human development,” Davidson says, “is that the prefrontal cortex matures as we get older. It’s an important part of the brain that enables us to do what psychologists call mental time travel, where we can anticipate the future and reflect on the past. But in preschoolers, where the prefrontal cortex is not so developed, they’re not worrying about tomorrow. Their future is maybe three minutes from now.”

Teaching children mindfulness is easy, he says, but must be done in an age-appropriate way that looks very different from how meditation practices are typically taught to adults. One strategy he recommends for preschoolers is to practice belly breathing where the children lie on their backs and a little stone or stuffed animal is placed on their tummies. They’re asked to simply observe the stuffed animal or stone moving up and down as they breathe for a minute or two.

“They are really easily able to do that,” Davidson says, “and they get it immediately.”

Another technique is to have the children sit and listen keenly while the instructor rings a bell or chime, and to raise their hands when they can no longer hear the sound.

“You can be in a classroom with 20 kids, and the quietness and stillness are palpable during that time. As soon as they stop hearing the sound, they start jumping up and waving their hands. But for at least that 10 or 15 seconds, they can really taste what stillness is like, and they love it. They frequently will ask for it because at a non-conceptual, visceral level, they know that it’s beneficial.”

Once a child has “tasted the stillness,” Davidson says, they can return to it again and again and it becomes a useful strategy in learning their own self-regulation. Mindfulness isn’t just a way to get fidgety little ones to be quiet for a while; it serves as a means for them to be in charge of themselves—to learn to calm themselves and modulate their thoughts, behavior and emotional responses to their environment—skills that studies have shown to be robust predictors of success in multiple major life outcomes, from physical wellness and financial success to the likelihood of avoiding substance abuse or engaging in antisocial behavior.

“A large body of longitudinal data show that kids who have a better capacity for self-regulation at age 4 or 5 do better in life. If we can teach those skills early in life—and we can—they will have multiplicative effects as the children develop.”

Davidson, professor of psychology and psychiatry at the University of Wisconsin-Madison, is the founder and director of the Center for Healthy Minds. He came to the topic of mindfulness and the study of healthy minds by way of a question he couldn’t answer: Why are some people vulnerable and some resilient? He was already a neuroscientist in 1992 when he first met His Holiness the Dalai Lama, with whom he is now a close associate and friend, who issued a challenge that altered the direction of Davidson’s career and led to his groundbreaking investigation of emotion and the brain, for which he is now recognized as a global authority.

“You’ve been using the tools of modern neuroscience to investigate anxiety, fear and depression,” the Dalai Lama said. “Why can’t you use those tools to study kindness and compassion, to study the positive qualities of life?” Davidson says that simple challenge was a wakeup call that led him to focus on well-being and healthy qualities of mind and ultimately to the establishment of the Center for Healthy Minds. More recently, the Center has launched a “Kindness Curriculum” aimed at promoting social, emotional and academic skills among preschoolers.

It all starts with mindfulness, which is foundational in answering Davidson’s question about resilience. He defines resilience as the rapidity with which one recovers from adversity. To paraphrase the bumper sticker, he says, “stuff happens.” No one can lead a life completely buffered from adversity. Resilience is about how we bounce back from the stuff.

“And it turns out that the simple skills of mindful awareness can help us return back to that baseline more quickly. We can measure this objectively—it’s not based on self-reporting but actually measured in behavior and physiology, and in the brain. We have shown that through the increased practice of simple mindful awareness techniques you can actually learn to become more resilient and to recover more quickly from adversity.”

“This is not only at the core of our psychological well-being, but our physical health as well. Some of those systems that need to recover are the stress biology systems; for example, the stress hormone cortisol. Researchers have measured cortisol levels following an acute stressor and know that people differ dramatically in how quickly they come back to baseline. This has tremendous applications for physical health because when cortisol remains elevated beyond the point where it is serving a function, it can have really deleterious effects on the brain and the body.”

Developing an acquaintance with mindful awareness, Davidson says, is one of the “Four Pillars of Well-being” that the Center has identified. The next, which builds on mindfulness, is connection, the qualities that promote healthy social relationships such as kindness, compassion, appreciation and gratitude. The third and fourth pillar are insight and a sense of purpose, but Davidson says those really begin to take on significance in the early teen years. Kindness and connection start very early.

“We have done randomized, controlled trials on simple practices designed to cultivate kindness and compassion in both kids and adults and the practices translate into real behavior,” he says. “In one trial we did with preschool children with our Kindness Curriculum, we found that compared to a randomized control group, the kids who received our curriculum behaved more altruistically on a hard-nosed measure of altruistic sharing compared to their classmates who received a standard curriculum. These and other findings indicate that with practice kindness can be learned, which has led us to a simple but very radical conclusion, which is that characteristics like kindness—and well-being more generally—should be regarded as skills.”

The good news in this finding is that skills, unlike qualities which are innate, can be taught, practiced and learned.

“We all have various kinds of early predispositions, genetic and environmental, and have a starting place. But these characteristics can be further nurtured and developed. The way we now think about kindness and compassion is very much like the way scientists think about language. We all come into the world with a biological propensity for language, but we know that if we’re not raised in a normal, linguistic community, language won’t develop normally.

“Similarly, kindness and compassion are part of what it means to be human, and there are good data showing that the vast majority of young infants, when given a choice, behave in a prosocial, altruistic way.”

The default response for humans is to help others, not to be selfish, he says. But in order for those seeds to grow, they have to be intentionally cultivated. And they must be, he says. As the news of the day continues to underscore, humans have to learn to get along more cooperatively and compassionately: The flourishing of humanity and the planet are at stake.

It all begins with mindful awareness, and if you want to get started learning on your own, it’s easy. Just put a stuffed animal on your belly and breathe.