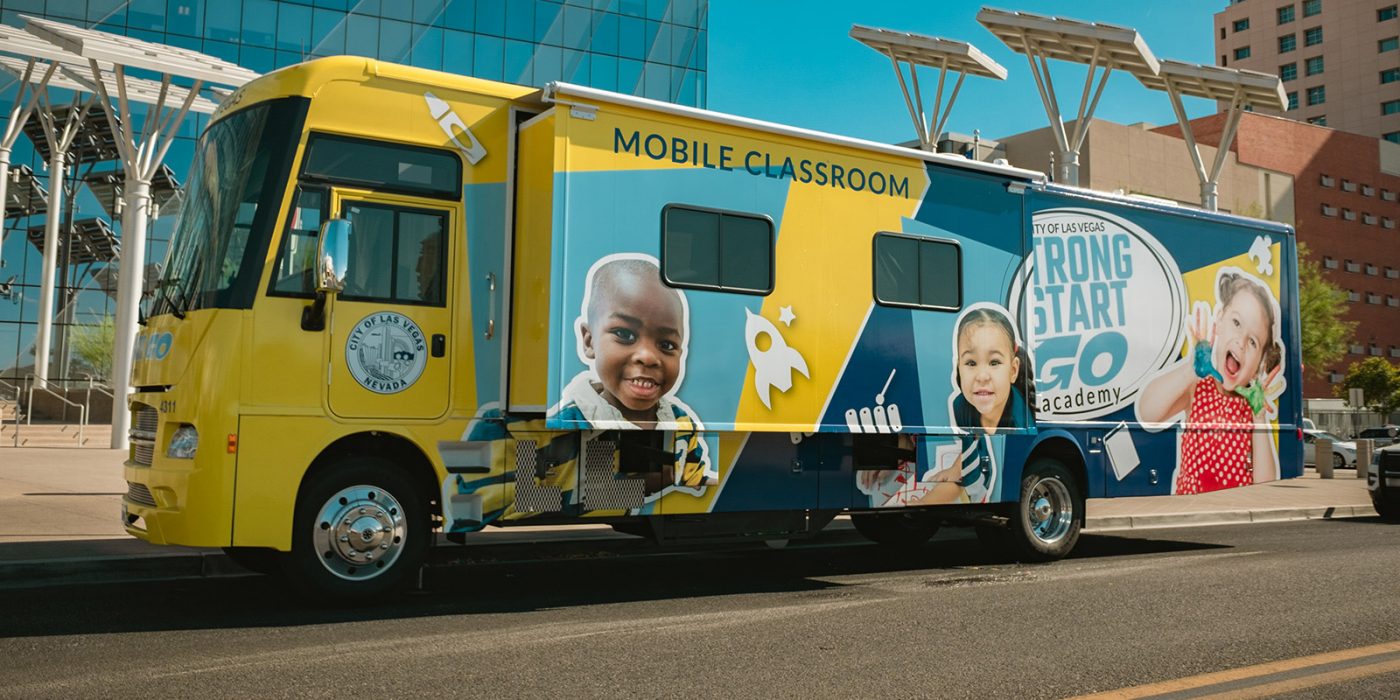 Soon after the city of Las Vegas made a substantial investment in early learning with its Strong Start Academies Pre-K programs, child advocates became aware of a different kind of desert in this Mojave metropolis: Childcare deserts where low-income families have no access to the kind of quality early childhood education that readies children for kindergarten.

“Las Vegas believes in the power and impact of high-quality early education,” says Dr. Tammy Malich, director of youth development and social innovation for the City of Las Vegas.  In 2017, the city launched the Strong Start Las Vegas campaign to build awareness of the importance of early childhood education and to drive home the reality of how vital the first five years of life are to a child’s future success. Out of that grew the Strong Start Early Learning Academies in partnership with Acelero Learning, an established, well-respected Head Start program. Strong Start now comprises three brick and mortar facilities with a fourth coming online in August 2021 that focus on kindergarten readiness for children aged 3 and 4.

Despite that investment, gaps remain. In the city of Las Vegas, 17.7 percent of children aged 0 to 5 live in poverty, with a large proportion located in the urban core where many families face daunting challenges to giving their children that crucial good beginning. The city has committed to helping these families overcome those roadblocks, Malich says.

“At the unveiling of the first mobile academy, Mayor Carolyn Goodman was so pleased, she said she wanted a fleet. So far, it’s a fleet of two,” Malich says. “The Mayor’s Fund for Las Vegas LIFE—the city of Las Vegas’ vehicle for corporate and philanthropic partnership—is seeking donors for the third bus now.”

The city’s early learning programs represent a significant change in the view of care for 3- and 4-year-old children, Malich says. Until recently, childcare centers for this age group were thought to be doing their job if they were safe, caring and gave the little ones a snack and a nice place to play. But as researchers’ understanding of brain development in young children has grown, educators have increasingly come to terms with the readiness gap that means low-income children are starting school already far behind. The pre-kindergarten years have taken on a much greater significance in preparing children for a successful life.

“We saw the gaps in kindergarten and first-grade classrooms between the children who had more advantages and the 5-year-old who walked in without ever having been out of their home in any kind of a formal setting,” Malich says. “Suddenly they had to follow rules, share and deal with an unfamiliar social and emotional environment in addition to having no academic experience. We saw the negative impact and what a great disservice it is to our kids who grow up with so many obstacles and barriers.

“We still feel strongly about providing that safe, loving space, but we also want to make sure we tap into their minds when they are so ‘spongey’ and most eager to learn,” Malich says. “They are so bright, and they retain everything.” If they can’t come to a learning center during this crucial time, Strong Starts wants to take the learning center to them, she says.

The Mobile Pre-K program allows the city to be flexible and responsive to neighborhoods’ changing needs, Malich says. As the neighborhood’s demographics change, being mobile enables Strong Start to go into other high-need areas, bypassing families’ transportation problems to deliver pre-K right down the street.

Each of the buses has a licensed teacher and a teacher’s aide, plus trained substitutes who can step in as needed. Though the teachers have at least 10 years of teaching experience, none of that background prepared them to wrangle pop-out extensions on an RV or back a big vehicle out of a tight spot. For these skills, all the staff attended driving school to be trained and certified with RV level driver training.

“At first, they were definitely nervous,” Malich says. “But once they learn and then do it every day, they get very comfortable. Plus, it may make them an asset during family vacation time.”

Funding for the Strong Start Academies Pre-K program is a community affair, Malich says. It is also a prime example of the results that can be produced when leadership and a community come together on an issue of importance.

The Strong Start staff and program funds are financed through the Redevelopment Agency (RDA) Education Set Aside funding pursuant to AB 70. Funds to purchase and rehab the buses came primarily from RDA Education Set Aside funds, however, the second bus was partially funded through the Mayor’s Fund for Las Vegas LIFE, which provides a way for corporate and philanthropic partners to support initiatives that improve Las Vegas residents’ quality of life. The Nevada Taxpayers Association, which advocates for “responsible government at a reasonable price” awarded Strong Start Mobile GO its Taxpayers Award for efficient programs last year.

For both mobile and bricks-and-mortar Strong Start Academies, the free pre-K programs are only one component of the offerings for low-income, working families. The children’s programs take place four days a week and on the fifth, the Academies offer engagement sessions that coach and support parents in skills and activities to participate in their child’s learning. In addition, the program gives each of the parents a Chromebook and provides training on how to engage with distance learning and how to interact with the digital landscape they’re about to enter when their child starts school. The computers are preloaded with educational apps that the families have access to whenever they wish, which enables the caregivers to share academic-oriented programming with the children instead of playing video games or watching TV. Having the computers and being able to participate virtually has dramatically increased participation in the parent-engagement sessions, Malich says.

“Once we get the parents navigating the Chromebooks, it affords us an opportunity to push out messaging about workforce and training opportunities as well,” says Malich. “Beyond just helping the kids, it can become a multi-faceted tool many of the families haven’t had. We can help parents navigate how to fill out online applications, find virtual jobs and other important information they need to be able to engage in the electronic world we now live in.

“The focus remains on the children, but helping the parents create better situations for themselves improves things for the entire family.”