For Want of a Diaper, Families Are Getting Lost: No Diapers. No Day Care. No Job. 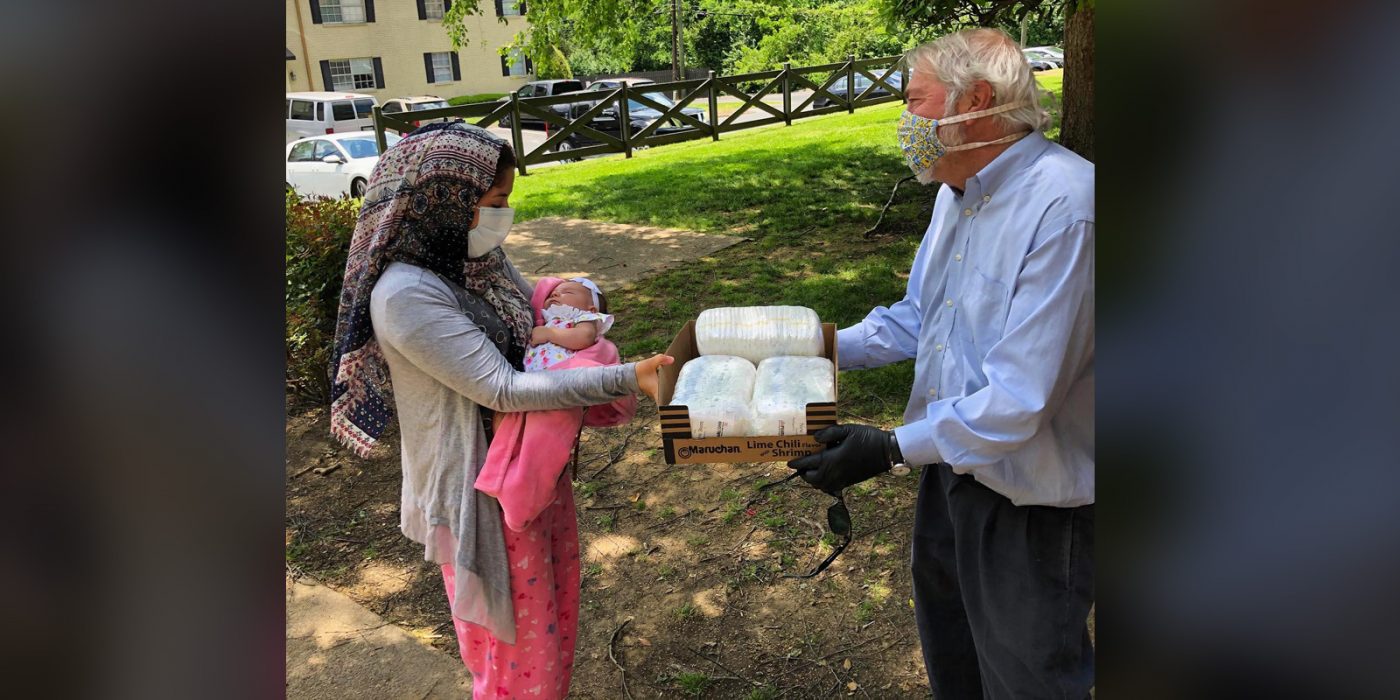 This may be one of the saddest facts you read in a while: One in three moms in the U.S. struggle to afford diapers for their babies. One in three. And although more than five million U.S. babies and toddlers live in poor and low-income families, no government programs provide diapers or funding to purchase them.

Diapers are not what automatically comes to mind when we think of poverty, but to Joanne Samuel Goldblum, co-author with Colleen Shaddox of Broke in America: Seeing, Understanding, and Ending U.S. Poverty, diapers are a keystone staple whose absence underpins big problems, not just for the families affected, but for our economy and society.

“As a rule, our government thinks about ‘big things,’” Goldblum says. “It doesn’t think about the small things that can have such an impact. But if you think about what it takes to put yourself together in the morning to get out the door, those hygiene products cost a lot of money.”

Goldblum points out that there’s no food-stamp equivalent that enables people to purchase hygiene items like diapers, toothpaste, shampoo or period products, and few nonprofits offer them for free. Hygiene does not figure into the government’s support equation, though remembering the times in our lives when we were not able to get to a shower for a couple of days, got caught out without a tampon or had to make a mad dash to the store when baby had a blowout can give anyone an appreciation for the urgency to feel clean. For people living in poverty, those needs are too often a relentless, daily constant.

Goldblum said she first became aware of the level of need when she was working at Yale Child Study Center as a social worker doing community-based work, which involved home visits with her clients.

“What they had in common was a level of poverty that shocked me, even as somebody who thought they understood what poverty in the United States looked like,” she says. “The crystallizing moment was working with a developmentally disabled mom who had three children under 3 and they never had toilet paper in the house. There I was, a clinician, supposed to help them learn better parenting skills. There is no clinical intervention for not having toilet paper.

“I saw the same woman take the diaper off, empty out the solids and put it back on. She didn’t need to be taught that her baby needed a fresh diaper. She needed enough clean diapers.”

Goldblum began to research the scope of the situation and found that in the U.S., lack of basic hygiene necessities is just not part of the conversation about poverty. She chose to focus on diapers because their lack serves as a window into poverty, as does the lack of period products for those who need them. Goldblum started the New Haven Diaper Bank, which is now the Diaper Bank of Connecticut. After seven years, Huggies came on as a partner and served as the founding sponsor for the National Diaper Bank Network (NDBN), of which she is founder and chief executive, now connecting and supporting 225 member diaper banks across the country, with one in every state.

Beginning with the physical and emotional impacts on the baby, not having enough diapers has profound effects that go far beyond one little baby being forced to sit in their own filth—which, the indignation vibrating in Goldblum’s voice tells us, ought to be motivation enough. Babies without clean diapers are exposed to greater health risks and are prone to urinary tract infections and diaper rash.

“It’s important to keep sight of how difficult that is on the parent as well. For any parent to have to decide between food and diapers, or heat and diapers? I don’t know how you make that decision.

“My kids are grown but I still remember what it’s like to have a baby with diaper rash,” she says. “I had hot water and enough diapers to change my baby regularly, but they still got diaper rash sometimes and I still remember the stress that caused. It was visceral for me.”

It’s visceral for mothers in poverty as well, she says.

“We did a study in 2013 with our colleagues at Yale University, the first peer-reviewed study done about diaper need,” Goldblum says. “We found that diaper need was more highly correlated with maternal stress and depression than lack of anything else—even food. Not having enough diapers also impacts children’s mental health, being exposed to toxic levels of stress over long periods of time. It affects how children develop.”

Diapers: Keystone to Our Economy

Beyond the fact of physical and emotional stress on mother and child, diaper need has a powerful effect on our economy. Most day care centers require that parents provide a day’s supply of disposable diapers for their children. Disposable diapers cost, on average, $80 per month, per child—for America’s poorest families, that amounts to around 14 percent of their after-tax income. If a mother doesn’t have enough diapers, she can’t take the child to day care.

“No diaper, no day care. No day care, no job. No job, no pay,” Goldblum says. The cumulative effect of those absences takes a toll on the families and on the workplace, with ripples throughout the economy.

In 2017, a study by the University of Connecticut’s Center for Economic Analysis found that 57 percent of the families receiving diapers from The Diaper Bank of Connecticut had been unable to take their babies to child care at some point during the previous month because they didn’t have enough diapers. As Goldblum and Shaddox report in Broke in America, in most of the 2,679 households the researchers analyzed, the parents reported missing an average of four days of paid work or school a month. The study’s authors calculated an increase of $11 in personal income for every dollar’s worth of diaper aid that a family received.

Stay tuned for October 20-22, 2021, when the National Diaper Bank Network (NDBN) will bring together advocates and community leaders from the nation’s basic need banks (diapers, hygiene and period products) for an annual, multi-day, in-person conference focused on ending diaper need and period poverty in the U.S.

Due to COVID, the conference this year will be a hybrid in-person and virtual event, featuring nationally recognized keynote speakers in a collaborative, interactive educational space.

The families’ incomes also rose because parents could complete educational programs qualifying them for higher-paying jobs when they had sufficient diapers. The study found that 1.2 to 1.3 jobs are created for every $10,000 of diaper aid—a ROI that leaves many taxpayer-funded “job creation” incentives in the dust.

To those who helpfully offer that mothers in poverty should “just use cloth diapers,” Goldblum agrees that’s a great solution for those who can get it.

“Cloth is absolutely an option for some people and in those cases, we encourage it. When it comes to cloth versus disposable, though, the National Diaper Bank is Switzerland: We don’t care. We want babies to be clean, dry and healthy. And we want it to work for families. As 95 percent of Americans use disposable, that’s going to be true of people in poverty as well.

“For people working a couple of jobs, living someplace without laundry facilities, struggling to get by, well … quality is a bit of a privilege.”

Dismissing diaper need with “just use cloth” or—another unhelpful and oft-offered opinion — “don’t have a baby if you can’t afford it,” indicates a deep lack of awareness of what life is like on the ground, in the trenches for America’s poor, who are often our working poor. As the authors point out in in Broke in America, the people suffering from diaper need are often those pushing our cheeseburgers out the drive-through window or changing the sheets in that nice hotel we snagged for the weekend.

Though Welcome, Rescue is No Longer a Long-Term Solution

President Joe Biden’s American Rescue Plan Act of 2021, a $1.9 trillion economic stimulus bill that Biden signed in March, is the federal government’s greatest initiative toward fighting poverty in the U.S. since Lyndon Johnson’s Great Society in the 1960s.

“It isn’t the answer,” Goldblum says, “and it won’t end poverty. It is going to lift a huge number out of poverty, though. It’s not enough, but it’s in the right direction. Now we need to ask, what will we do post-COVID? What will we do in the long term?”

At stake, she says, is our nation’s view of poverty and people on the margins—margins that are growing every day because of the one-two punch of the pandemic and income inequality. Historically, America has been a land of haves and have-nots, where people in poverty are viewed as somehow not deserving of help.

“What I believe and what our diaper banks are about is that children deserve a level playing field,” she says. “So much of what happens in a person’s life is shaped by the first three years. Our goal is to have everybody come out of those first three years as strong as they possibly can be—and to do that, people need access to basic needs: laundry facilities, toilet paper, period supplies—and diapers.”