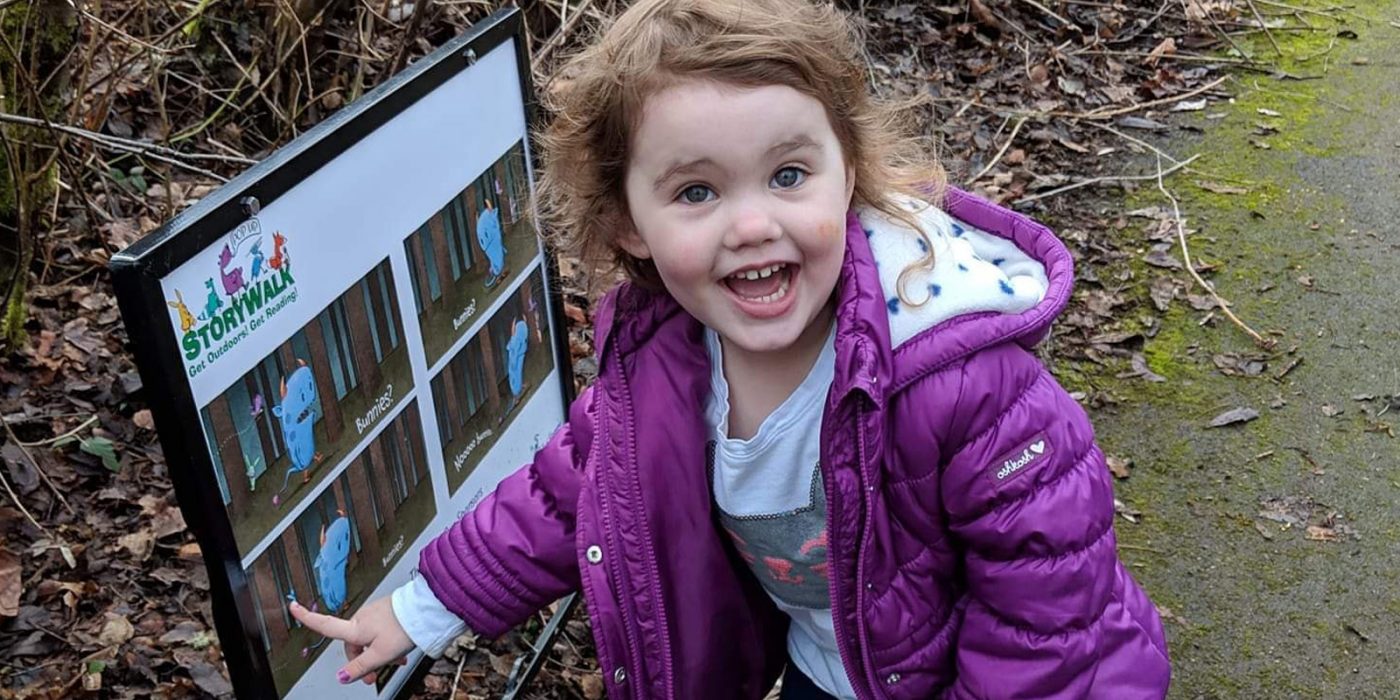 Getting a child outdoors to embrace literacy, art and the great outdoors is simple: All you need is a cordless drill, a mallet, a good auger bit and, of course, a delightful storybook.

At least that’s been the successful recipe for PopUp StoryWalk, an arts and literacy advocacy organization in the Seattle area that for the past four years has gotten thousands of families outside with their kids to read colorful children’s books installed on trails throughout the Puget Sound area.

Elisabeth Lepine discovered the idea of combining storybooks with hiking while on vacation in upstate New York, where she stumbled upon a StoryWalk® trail and saw for herself the possibility of combining literacy with healthy outdoor activity.

As word of PopUp StoryWalk has spread, the team has received requests from all over the Puget Sound area. …they can’t meet all those requests but are more than willing to train people how to replicate the project and have created a travel kit to help them get started.

“My littlest child was a baby, so I was wearing her,” Lepine says, “but my two-year-old daughter was so excited and ran from panel to panel, running back to lead us to the next display. It was the easiest hike we’d ever done as a family—Juliet never complained about being tired and was so eager to show Daddy what she’d found. When we moved to Washington state, I fell in love with all the beautiful state parks and trails we have and couldn’t believe that StoryWalks® weren’t popular out here. So, I decided to create one.”

The original StoryWalk® Project was created by Anne Ferguson of Montpelier, Vermont, and developed in collaboration with the Vermont Bicycle & Pedestrian Coalition and the Kellogg-Hubbard Library. The name StoryWalk® is a registered trademark and there are now StoryWalk installations all over the country—but they really hadn’t taken hold out West.

When Elisabeth shared her idea for creating a local StoryWalk®, her friends Beth Yost and Jasmin Thankachen were immediately on board.

“It has been a true team effort,” Lepine says. “We all have our own wheelhouse in the project, but we do everything as a team. For example, I may reach out to publishers for one book, and Beth or Jasmin will reach out for another. We all have relationships with various city’s parks and recs officials and can interchangeably respond to permitting requests or arrange site visits, etc. A team effort for sure!”

The initial idea was to create a permanent installation in beautiful Saint Edward state park on the east side of Lake Washington, but park staff told the team it wasn’t a good time for a permanent addition to the park. They could put up a temporary installation if they wanted, however.

That was the Aha! beginning of the PopUp approach, a new twist on the original idea of StoryWalk®. Instead of being limited to one geographic location, the women saw that “temporary” gave them a wider range of options and could greatly expand their project’s reach.

“Looking back, it’s been a blessing because we haven’t been limited to just one locale and have been able to serve a bunch of different communities,” Lepine says. “We’re now able to provide pop-up stories for families to experience free at multiple locations.”

PopUp StoryWalk favors books from local authors, which gives the stories a sense of place and also boosts the program’s connection to the Greater Seattle community. The books are displayed page by page on weatherproof storyboards mounted on sturdy metal frames that are placed on easy-to-navigate trails. That way, families can begin reading a storybook together at the start of a trail, read its pages as they wend their way along the path and finish the book at trail’s end.

Now in its eighth season (two series per year), the program has installed a dozen different storybooks in 40 different locations. Pre-pandemic, the sites featured a waterproof field guide for patrons’ comments or recommendations for new books or trails. On one installation, more than 100 families had made entries, which Lepine says gives the team a sense of how many patrons they’ve been reaching—now into the thousands.

Each installation stays up for three weeks, and families can keep track of where they’ll find the next story by checking the organization’s website, Facebook or Instagram. PopUp StoryWalk rotates among book selections so families can enjoy a new outdoor adventure with each installation. The co-founders choose books that have some outdoor experience in the story, along with lessons of kindness, empathy and creativity. The 2021-2022 season focuses on diversity. The team works with local brick-and-mortar bookstores and a local toy store to carry the books, which are promoted on the last panel of the hike.

Local artist Keven Atteberry, author of “Bunnies!!!”—one of PopUp StoryWalk’s first selections—designed the playful, irresistible logo. Once the team has decided on a book, Lepine reaches out to publishers for PDFs of the book so she can expand the page size to stand out on the 18-by-24-inch storyboards. Surprisingly, not all publishers jump at the opportunity to promote their authors’ books in this way, but Lepine is committed to presenting the pages in a large format so families can easily spot and read the panels. The books she goes with are the ones the team loves and the ones she can get PDFs for (for which they have to pay the publishers).

And then, it’s time for the team and volunteers to head out to the trails and put the books in place, which is where the auger, mallet and other essentials come in. It’s a good workout: Set-up takes two to four hours, Lepine says, and after three weeks, they all come down and the process starts in a new location.

PopUp StoryWalk’s fiscal sponsor is the Arts of Kenmore, a local nonprofit promoting citizen participation in the arts. Under their umbrella, PopUp StoryWalk is able to continue as a nonprofit without having to apply for its own 501(C )(3). The team has been able to get small grants through King County’s 4Culture program and has several local sponsors.

Those considering their own PopUp StoryWalk should count on $5,000 start-up costs for the first book, which includes one-time purchases such as the equipment to install the panels, wagons to transport all the materials and the metal storyboard frames. After that, the team budgets about $2,000 per storybook, plus $500 or so for vandalism, which occurs with maddening frequency. They constantly monitor the panels or respond to patrons who let them know via social media when a board has been damaged.

Since the program’s inception, they have worked with Cox Printing & Signs in Bothell, and have developed strong relationships so they can call and say, “Need Panel 7 of ‘Bea’s Bees’ stat!” and the panel will usually be ready to pick up first thing the next morning. Lepine says relationships like that with local businesses, and with the parks and other facilities where they return regularly, is key to the group’s success.

PopUp StoryWalk’s mission of promoting lifelong learning and an appreciation of the outdoors is one that’s easily embraced by the nature-loving Seattle community, and the team’s consistent practice of delivering the goods keeps those community ties strong.

As word of PopUp StoryWalk has spread, the team has received requests from all over the Puget Sound area. Given that the founders volunteer their time and labor, they can’t meet all those requests but are more than willing to train people how to replicate the project; they’ve created a travel kit to help them get started.

Lepine says the team is happy to talk with others who are interested in starting a PopUp StoryWalk in their community (popupstorywalk@gmail.com). If someone wants to create a StoryWalk® they need to include the trademark symbol and the official statement found on the Kellogg-Hubbard Library website on all promotions of the project, which PopUp StoryWalk includes at the bottom of every page of its website and on the first panel of each story.

Lepine, Yost and Thankachen have now installed the first two of their 2021 diversity series but haven’t announced all the locations yet. They like the element of surprise, so patrons never know where they’ll pop up next.