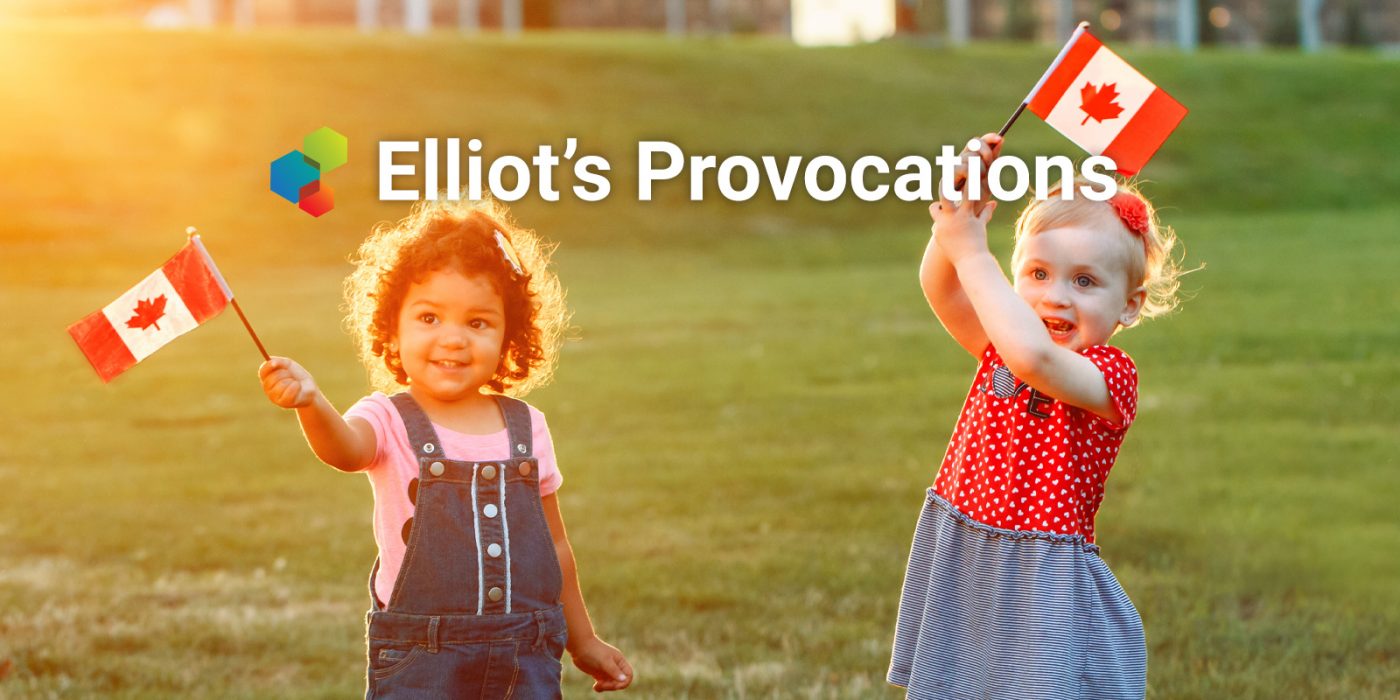 We hope this column does that: provocations are certainly not answers, but we hope Elliot’s Provocations helps you pause and consider concepts in a different way.

While the U.S. is busy debating whether or not to finally invest in our failing child care system, Canada is busy doing it. This spring, the Canadian government announced a C$30 billion investment putting the nation on the path to an effective system where parents will average fees of C$10—around US$8—a day. We can look to our northern neighbors for inspiration and lessons learned as America reckons with its best chance in a half-century to transform child care.

First, a bit of context. C$30 billion, using a rough population adjustment to the American context, is in the neighborhood of the U.S. investing $240 billion. The Canadian funds are to be paid out over five years. Yes, it’s a lot of money.

Canada illustrates the concept of a national child care system that is nationally-supported, but locally-run. The federal government has been entering into what are known as “bilateral agreements” with the provinces, laying out the respective obligations. So far, eight such agreements have been signed, including in provinces with both liberal and conservative leadership (“blue states” and “red states,” if you will). In most cases, provinces are also contributing substantially to the upgraded system; for instance, British Columbia is adding C$2.5 billion over three years to the pot.

Each agreement shares certain principles: within a year, parent fees are to be halved on route to an average fee of C$10 a day by 2026; large numbers of new licensed child care slots are to be created; and provincial wage grids are to be put into place to ensure adequate compensation for the workforce. If you’re following along on your child care policy bingo sheet, that’s Affordability, Access and Quality.

Take Saskatchewan as an example. The conservative-leaning and heavily rural province has a population of 1.1 million people, putting it around the size of Montana or Rhode Island. The federal government will be pouring over C$1 billion into Saskatchewan; that C$200 million per year is equal or more than entire (and much larger) U.S. states like Utah and Virginia currently spend on child care. In announcing the agreement, the Saskatchewan Education Minister said: “The Government of Saskatchewan is committed to investing in affordable, accessible, and quality early learning and child care options that provide flexibility and choice to Saskatchewan families … We are pleased that this deal creates 28,000 new regulated spaces [more than doubling the existing supply], makes life more affordable for Saskatchewan families and enhances the wages of early childhood educators who support children across our province.”

If this all seems like a very big deal, you’re right. Prime Minister Justin Trudeau’s ruling Liberal party made the national child care plan a tentpole policy; after the federal budget proposal was rolled out in April, a poll found “when asked to name one proposal they could recall about the document, 50 percent named child care.” The plan is enormously popular, drawing more than 70% support in some surveys.

While the recent election was inconclusive—returning Trudeau and his Liberals to power but still in minority status—many Canadian political analysts have suggested popular ideas like child care helped keep the party from slipping further in the face of backlash from Trudeau opting to call an early election (Trudeau’s main opponent, the Conservative leader Erin O’Toole, had pledged to scrap the bilateral deals).

So what can the U.S. learn from Canada’s experience? From a political standpoint, American elected leaders and candidates should realize that investing in child care is all upside. I’m no expert on Canadian politics, but all signs point to the Conservative child care proposal of merely offering tax credits falling flat. Relatedly, this is a tale of how it matters to use the power you have while you have it (CC: certain Democratic Senators). It is easy to imagine a theoretical debate going far differently than one in which the opposition party had to promise to rip up eight existing agreements poised to deliver major benefits for families.

The Canadians focus far more on the benefits than the price tag, although they can easily point to estimates the system will soon pay for itself. It’s an approach that has resonated with the public.

Advocates should also take heed that Canada’s child care triumph is the result of provincial innovation creating a proof of concept that has now gone national. Quebec started its heavily subsidized system in the late 1990s, British Columbia followed with its $10 a Day campaign in the 2010s, and now here we are. State leadership—and advocacy movement-building—is critical.

There is much more to be written about the strategies and tactics Canadian advocates and organizers have successfully used; one point I will home in on briefly is their highly effective messaging. Go back and read the quote from the Saskatchewan education minister (which echoes the nationwide talking points; I could have drawn from dozens of similar quotes). Note how seamlessly the ideas of choice, affordability, accessibility, quality and workforce are knit together. From my reading, the Canadians focus far more on the benefits than the price tag, although they can easily point to estimates the system will soon pay for itself. It’s an approach that has resonated with the public.

I don’t want to take the comparisons too far. While Canada is not Finland, neither is it precisely the United States, and to be sure, Canada still has a long road ahead, including the all-important implementation phase. That said, we can look north to draw hope for our own fight. We no longer have to cast about to find a large, diverse nation with a crumbling, market-driven child care system that has opted to give families what they need and deserve: real choices.