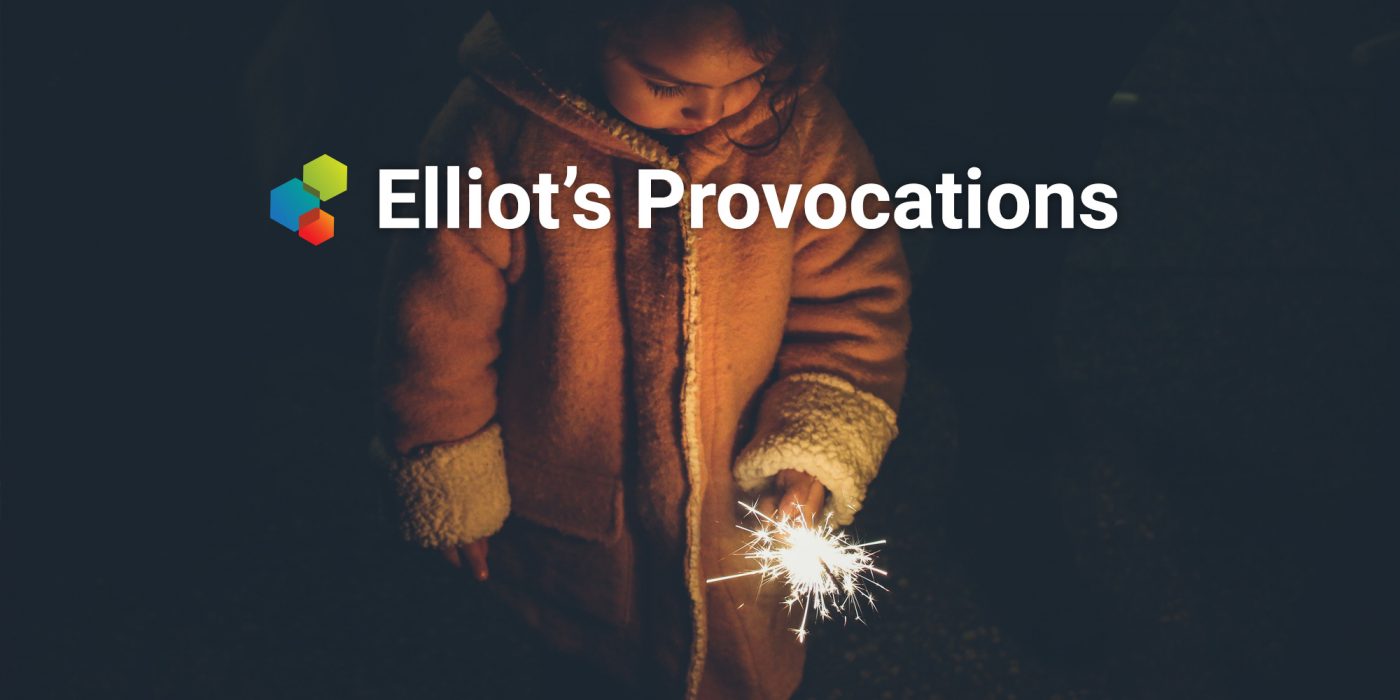 Photo by Zara Walker on Unsplash

2021 was a momentous year for early childhood care & education. The field suffered blow after blow from COVID and then a knock-on staffing crisis; received nearly $50 billion in rescue funds to temporarily patch the gaping leaks; and is ending the year on the precipice of receiving enough public funds through the Build Back Better Act to finally become a stable and healthy sector. The tectonic shifts were not limited to the U.S., either — this last year saw Canada roll out a new nationally-supported, provincially-run system, while Ireland’s government committed to major reforms. While perhaps a bit cliché AQ2, as we start 2022 I thought it might be useful to put forth some suggested early learning resolutions for the new year:

Ok, this one may seem obvious, but even after Senator Joe Manchin announced he will not support the House-passed version of BBB, there is still a glimmer of hope (as the Huffington Post’s Jonathan Cohn wonderfully referenced, we all know from The Princess Bride that “mostly dead is slightly alive.”) In fact, in an odd way, Manchin forcing the Democrats back to the negotiating table may open up an opportunity for even better early childhood policy. As Cohn wrote, one drawback of the House-passed bill was that the funding was only there for six years, and for the Universal Pre-K portions, the appropriations on offer weren’t all that generous. If Manchin is insisting on 10-year programs, that may actually end up sweetening the pot for states to opt-in.

In order to help get BBB over the finish line, advocates need to not only keep up the pressure at the national level, but ensure that parents and practitioners at the local level understand what’s at stake. Part of this is driving home the message that child care pays for itself, and that the economic threat of letting the system disintegrate is massive. The other part is getting the public — which is very supportive of the child care proposals — to really understand what the heck is being proposed. I’ve said this before, but one challenge of child care communications is that the policy itself is rather complex, and we often don’t do a good job distilling it (Quick! What’s seven percent of your income and where do you fall in your state’s median income distribution?). As a result, I’m not sure how many parents could tell you what’s about to fall in their laps, much less get excited enough about it to call their state and federal legislators. I’m a fan of using very simple explanations: Much lower fees. Many more choices. Far better paid educators.

Let 2022 be the year the United States finally gets a real child care system.

It’s not enough just to pass BBB, though. Our long-neglected child care infrastructure needs to be prepared to actually implement the policy and utilize the new spigot of money. I’ve been beating this drum for a while now, but even with a multi-year phase-in process, our ECE administrative and governance structures will struggle mightily to effectively shift from a weak welfare system to a robust entitlement system. Recruiting and training a larger workforce, as well as finding/upgrading facilities, are two gigantic mountains to climb. We probably need a larger pool of ideas for scaling them.

I started my career in K-12 public education. One of the most enduring lessons of that space is that implementation is the ‘valley of death’ where good ideas fail to translate to good reality. At some point, obvious as it may sound, this comes down to people making decisions and taking actions that result in money flowing (or not), programs expanding (or not), employees being well-trained (or not), and so on. At the same time, we should expect and communicate that the process is going to be bumpy but well worth it; that’s the natural consequence of finally starting to repair a badly dilapidated house.

I will say that I’m confident, having personally been part of many conversations, that those on the ground in states are well aware of these challenges. A laser-focus on implementation—and a willingness to discard old ways of operating where there are better alternatives—will go a long way in determining how effectively these new policies start helping parents, practitioners and children.

One way to smooth the bumps is to ensure policies, regulations and implementation plans are being co-created with those closest to the issue. We saw in Multnomah County (OR) how vital centering parents—especially parents from historically disenfranchised communities—was for the success and quality of their universal pre-K ballot initiative. We’ve also seen groups like the Raising Child Care Fund step forward to inject resources into groups that often have to scrabble for funding, and the Homegrown initiative empower vital family child care providers.

Continuing to give these individuals the mic, as well as exploring better power sharing between grassroots and grasstops advocates, will help to avoid unintended consequences and maximize the chances of success.

One element I enjoyed about moving from K-12 to the early childhood space was that early childhood folks inherently seem to get the whole ‘whole child’ idea on a deeper level. It’s captured in the broad concept of “early childhood development” — that young children (all children, really) develop not in a vacuum of a given child care program, but rather their brain development is indelibly influenced by relationships with their families and their environment. There is also much less artificial daylight in the early years between health and education.

That said, I’ve seen a bit of a tunneling effect as the child care crisis became a raging conflagration. If ever there was a time to bring our friends close, it’s now. I would like to see (reciprocally) a tighter and vocal connection between child care advocates and those working in the before- and after-school space, between child care and paid leave, and perhaps most importantly between the care and climate movements.

Climate change puts a ceiling on the effects of child care policy through direct health impacts on developing bodies and brains, devastation to physical care environments, trauma to both children and their parents, and reducing access to nature. Writing about a new ‘climate edition’ of the international Early Childhood Matters journal, Kendra Hurley notes: “‘Gains made in the health and well-being of children around the world, over many decades’ are ‘at risk of being reversed,’ concludes an overview of the research by New Zealand’s former prime minister Helen Clark.”

2022 needs to be the year that the early childhood community fully embraces the climate fight—including thinking about, as K-12 is, ways the sector can contribute to climate mitigation and education—and the year the climate community starts focusing more intently on young children and their parents.

This is an intense time for early childhood, a time of peril and possibility. It’s easy, particularly for a field with limited resources, to only focus on what’s directly in front of us. To some extent, this is absolutely the correct decision when what’s directly in front of us is a bill with existential implications. Yet we also have to cast our minds forward with at least a decadal perspective.

Beyond climate change, there is for instance a major unanswered question about how we bring stay-at-home parents and informal caregivers (grandparents, neighbors) into a comprehensive early childhood system. That may include big policies like a home care allowance, or smaller local-level actions like building free drop-in play centers and guided playgroups. Finding other ways to make life easier on parents—improving diaper benefits, building stroller-friendly infrastructure—will have ripple effects on family stability and child thriving.

There are other threats and opportunities that can be seen by putting on a futurist’s lens. It will be important to ensure that the expansion of pre-K does not lead to a further over-academizing of the early childhood years (avoiding the fate kindergarten has suffered), and that values of play and pluralism remain front and center. The parent power being built through continuous, unglamorous organizing can be wielded in any number of pro-family ways, yet will require continuous, unglamorous funding from the philanthropic community. Groundwork can be laid now for even bolder ideas that will take many years to come to fruition, like enshrining children’s rights. To put it more simply: even as we consider resolutions for 2022, let’s have one eye on 2032.

I want to take a moment to express my gratitude to each of you for taking the time to read these columns, and to every early childhood practitioner, advocate, organizer, and champion who has been fighting relentlessly on behalf of professionals, parents and children this year. We wouldn’t be poised for such transformative change without you. I also want to shout-out Early Learning Nation—and her wonderful editor, Linda Shockley—for creating a home for my thoughts and so much great early childhood journalism. Happy new year, and I look forward to continuing down the provocative path with all of you in 2022!