The Child Care Sector Starts to Flex Its Muscles

By Elliot Haspel
Elliot's Provocations
on May 17, 20224 min read 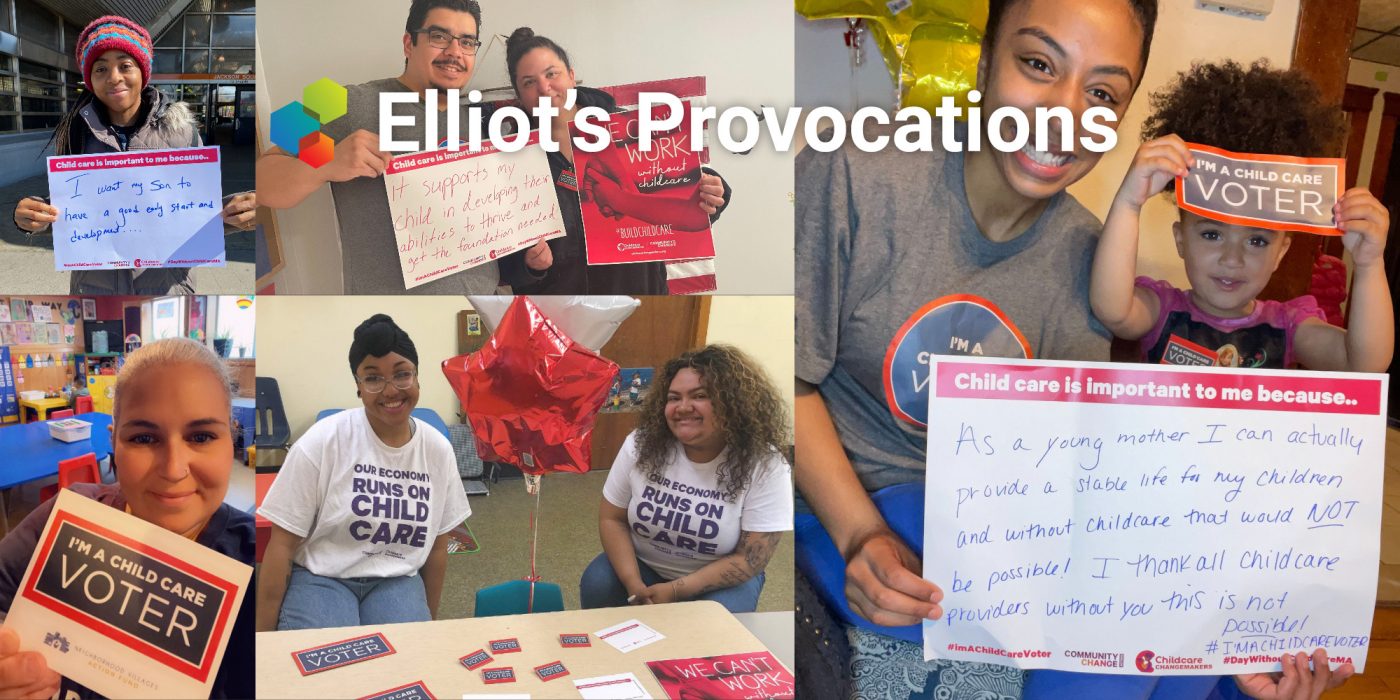 Child care has traditionally been a politically quiet sector. I don’t mean there hasn’t been resolute advocacy, but that has largely (though certainly not entirely) happened behind the scenes — at least in the U.S. there isn’t a long history of major public actions such as protests and strikes. That’s why it has been so remarkable to see child care providers, parents and other allies rise up in the past few months to say they’ve finally had enough. It’s having an impact.

There are complex reasons why child care hasn’t always had the same mass public activation as, say, K-12 education. The biggest overarching factors, to my analysis, are fragmentation and the lack of unionization. Child care providers are not one bloc, like 3 million teachers inhabiting 100,000 public schools. They span private and public programs, family child care and centers, faith-based and secular, non-profit and for-profit. It’s difficult to organize that many disparate stakeholders.

These actions happened in big blue urban areas like Philadelphia and rural red states like Montana. A big coalition of more than 50 diverse organizations linked arms.

It’s especially difficult without much presence from the labor movement, who are experts at these sorts of actions. Until very recently (and more on this in a moment), child care providers had relatively weak union connections, meaning they were very much on an island. Strained, isolated and exhausted, it’s no wonder there weren’t many protests. Until now.

I’m of course talking about May 9th’s Day Without Child Care, but I think there were two important recent steps that presaged the national action, and years of groundwork-laying before them.

The first was the historic recognition in 2020 of a family child care provider union in California. Child Care Providers United was started by the Service Employees International Union (SEIU) and American Federation of State, County and Municipal Employees. The union election—wherein 97% of those voting were pro-union—created the body that now has more than 45,000 members.

California’s union win was a marker of increased labor activity in the field. For instance, SEIU was one of the key players in the second important event: Connecticut’s Morning Without Child Care in March.

As I learned moderating a webinar about that event—an action that came together in just a few weeks—dozens of programs across Connecticut closed for the morning and there was massive media coverage from every major outlet in the state. Congressional representatives who weren’t even scheduled to appear came to join rallies. It caused advocates far beyond the Nutmeg State to sit up and take notice.

👉 Read ELN’s “Top Takeaways from Connecticut’s Morning Without Child Care” action to learn how Connecticut legislators who previously handed a budget of $0 for the child care industry are now proposing $124 million to support the industry. It also inspired a national day of action.

All of this leads up to May 9th. In an event that was truly led by those on the ground and centered in principles of racial, gender and economic justice (I was lucky enough to be lightly involved with the planning), hundreds of programs across the nation closed and dozens of rallies were held to demand action on child care. These actions happened in big blue urban areas like Philadelphia and rural red states like Montana. A big coalition of more than 50 diverse organizations linked arms. Both major national and local media covered the day. For something that again came together relatively quickly, this was nothing short of impressive.

And is this flexing making a difference? You bet. Connecticut had no significant child care funding bills moving through its legislature prior to the March action, and afterwards suddenly found a path to $100 million. Politico noted that pressure from actions like the Day Without Child Care is helping keep Democrats’ attention on finding some way to thread the reconciliation needle.

I’ve long argued the child care sector suffers—in many ways through little fault of its own—from not being powerful enough in a raw political sense. It’s not a field that has a big lobbying arm or gives much money to candidates, and the grassroots constituency of exhausted new parents isn’t quite as scary to politicians as, say, seniors. That’s all starting to change. There has been a proliferation recently of 501(c)(4) child care advocacy groups with more flexibility to get fully into the political fray, and clearly stakeholders are now willing to come out in force.

I’m often asked if I have any hope for the future of child care. I can honestly say I do. The federal landscape may be touch-and-go at the moment, but states and cities are racking up unprecedented wins, and the sector is waking up to its own power. Child care will no longer be quiet.