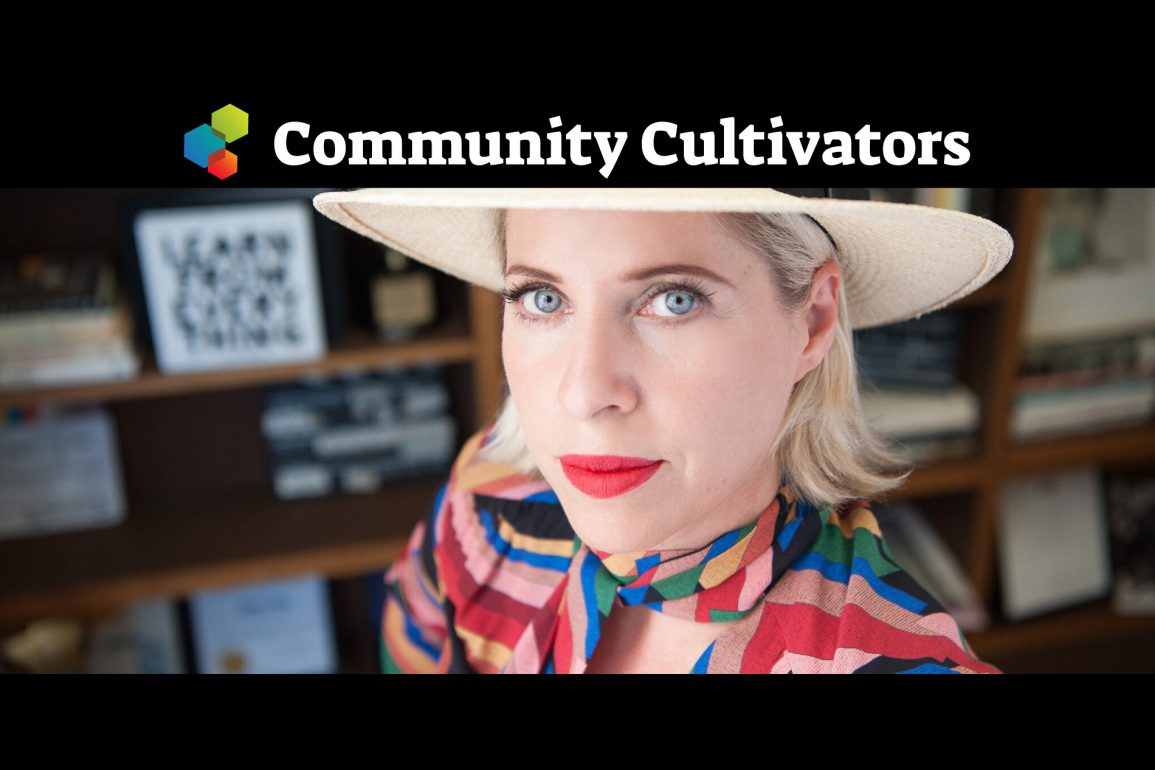 This is the fourth entry in Early Learning Nation’s Community Cultivators series, and you would think, by now, we’d have come up with a working definition. Who is a Community Cultivator? What does it take to build a community? So far we’ve met inventor Dean Kamen, spreading his love of robotics via FIRST Robotics; serial social entrepreneur Logan Smalley, cross-pollinating stories and lessons for TED-Ed; and young climate activist Mya-Rose Craig, sharing her passion for the world’s birds and conservation. What do they have in common? What motivates them to bother trying to change the world?

Don’t look for a single essential Community Cultivator ingredient, because there isn’t one. We’re looking for pattern breakers, so it wouldn’t quite make sense if there were a pattern, right?

Which brings us to Tiffany Shlain, who mashes up all the traits of the three previous Community Cultivators, embodying their iconoclasm without quite fitting alongside them. The easiest way to describe her is to say she’s a documentary filmmaker, but her prolific output feels less like a set of discrete productions and more like a single evolving project, ruminating on an interconnected set of themes, which boil down to technology (“What do you amplify and what do you amputate?” she asks; by the way, she founded the Webby Awards); and creative process at it is revealed through neuroscience.

“When I have or come across a provocative or challenging idea,” she says, “my inclination is to engage with as many people as possible.” In other words, what you see on the screen (theater-size or phone-size, it all works for Shlain) is just part of a rolling series of events and opportunities for conversation about a life well lived.

Her movies are “talkies” in the sense that talk—mostly in the form of the director’s inquisitive, insistently moral voice—pushes the story forward.

The best example of a Shlainian enterprise might be 50/50 Day, which arose in the wake of the 2016 U.S. Presidential election. A 20-minute film forms the core, but it was always about more than just the movie. It’s about dialogue and exploration and collectively challenging ourselves to advance gender equality. The 2018 edition comprised 36,334 live events in companies, schools, museums and homes in 62 countries.

Some of Tiffany Shlain’s Favorite Thinkers

The two latest chapters in the conversation are her first book, titled 24/6: The Power of Unplugging One Day a Week (coming out September 24); and Character Day (September 27-28). In typical fashion, they are somewhat intertwined. The book advocates for “Technology Shabbats”—a deliberate unplugging from our smartphones and devices one day a week, which she has practiced with her husband and two daughters (age 16 and 10) for a decade, while Character Day starts from an eight-minute film, The Science of Character and culminates in a Global Livecast during which participants can pose questions to prominent thinkers. (Sign your institution up today!) She promises “a global live event all over the world. It’s an experiment in terms of combining live events together through an online conversation. Last year there were over 200,000 groups participating. We’re constantly experimenting with integrating whatever new technology is available to us to engage people into the conversation. It’s like throwing spaghetti against the wall of the internet and seeing what sticks.”

Both Character Day and the new book about technology and our humanity are concerned with developing our inner resources for the betterment of family, society, and democracy. When should we be on screens and when should we turn them off? When does turning off screens, turn on the best character strengths?” “Everyone is staring down at screens,” Shlain tells me, owning up to being a somewhat compulsive emailer and texter herself. “When we look up from our devices, we can embrace beauty. We can live our values. We can be present. It’s a profound shift from the way we are living now”

She adds, “The issue feels so incredibly urgent. People are disconnected in front of people they love right in front of them. All this technology is trying to activate our amygdala, the so-called reptilian part of the brain, and weakens the prefrontal cortex—our brain’s control panel that orchestrates our thoughts and actions and acts as a filter to pause and think before we act.”

To appreciate Shlain’s worldview, I recommend starting with her 80-minute Connected: An Autoblogography About Love, Death, and Technology (2011), which ingeniously weaves together disparate ideas and historical moments against the backdrop of the final years of Shlain’s father, Leonard Shlain. Impossible to summarize, Connected demonstrates how film and technology can connect people around the world and attempts to envision how this connectedness could help us “take the next leap in human evolution.” You can also check out her Emmy-nominated original series “The Future Starts Here,” which has 16 episodes on everything she is passionate about.

Shlain organizes. She films. She blogs. Her quarterly e-mail newsletter, Breakfast @ Tiffany’s (sign up here), enables her to have a dialogue with tens of thousands of people all over the world. (On Twitter she is @tiffanyshlain.) She is a human idea factory. “My notebook goes with me everywhere,” she says. “Just as important as what I write is the feeling of looking at old journals, where old ideas turn up that I don’t even remember having. It’s like Thank you, brain, for that idea!” It’s serendipitous that her last name Shlain rhymes with brain because brains figure so prominently in her community cultivation. Moreover, serendipity itself drives her creativity and entrepreneurship.