An Indictment of U.S. Policy and Clarion Call to Fix It 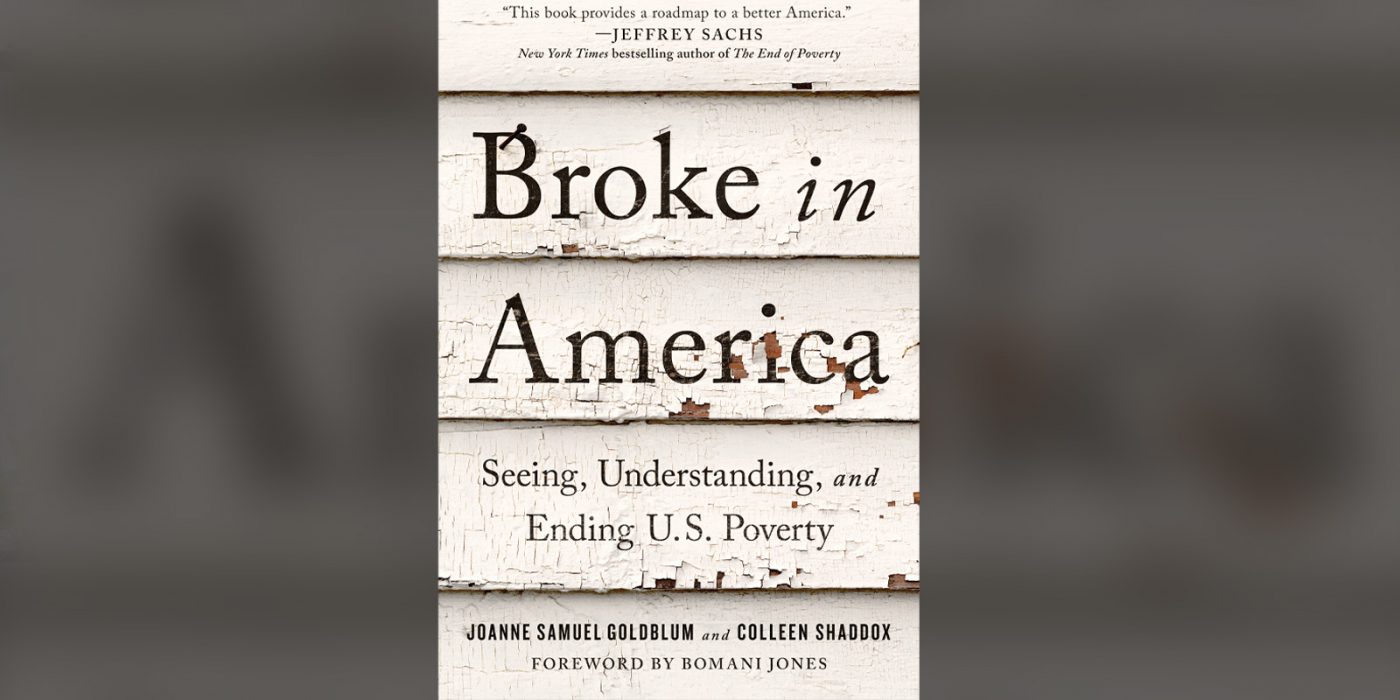 Thanks to U.S. public policy going back decades, nearly 40 million people in this country live below the poverty line of $26,200 for a family of four. This reality is not a bug but a feature of a system designed along the lines of “God bless the child that’s got their own.” Poverty is generally seen to be—and is promoted as—a personal failure, a moral deficit or the product of laziness and bad character.

As authors Joanne Samuel Goldblum and Colleen Shaddox point out in their blistering, deeply researched book, Broke in America: Seeing, Understanding, and Ending U.S. Poverty, the fact that financial insecurity has become a way of life for millions of Americans is none of the above. Neither laziness nor lack of education, nor a matter of morality, our widespread poverty is a result of decades of U.S. policy that has shaped a society in which people can be trapped in poverty by something as simple as a kid’s bad case of strep throat or a mechanical failure of the family car. Or by the mere fact of not being able to afford sufficient diapers to keep a baby in childcare so the parents can have a job.

The authors’ bona fides in the field are unimpeachable and the solutions they offer are borne of deep, direct experience. Goldblum has spent her career working with and advocating for families in poverty, first as a social worker and then as the founder and CEO of the National Diaper Bank Network and the founder of the Alliance for Period Supplies, both of which address the hygiene needs of low-income people. Shaddox is a print and radio journalist whose credits include contributions to the New York Times, Washington Post, National Public Radio and America magazine, among others. She has worked with nonprofits on projects devoted to getting children out of adult prison, ending juvenile sentences of life without parole and limiting the shackling of defendants in juvenile courts.

The concentration of women in low-wage jobs may benefit the employers and owners of the nursing homes, hospitals and fast-food restaurants that hire them but does little to provide some of our society’s hardest workers with access to a decent standard of living.

If we want to address poverty, the authors posit, we must first see it. Economic, social and racial segregation underpin the mechanism that keeps poverty invisible, the authors write. They then set out in the book’s first section, “Basic Needs,” to provide a clear-eyed, devastating view of how that balkanization of the economic classes came into being, what it really means to be poor in this country, who impoverished Americans are and what their lives look like, on the ground, in reality.

A large study by the Urban Institute finds that a full 38 percent of people in the U.S. have trouble consistently meeting their basic needs; the U.S. Census Bureau reports that 11.8 million residents were living in poverty in 2018, according to the federal poverty threshold. The gap in those statistics occurs because the federal poverty guidelines are irrationally low, based on a methodology from the early 1960s when fewer women worked outside the home. The cost of child care, transportation, and clothing and hygiene expenses don’t figure into the government’s definition of basic necessities. In their section on “Basic Needs,” Shaddox and Goldblum expand the definition to include water, food, housing, power (utilities), transportation, hygiene and health, including health care. This broader view of need provides a searing portrait of poverty that puts the broken in “broke.”

In the second section, “Forms of Oppression,” the authors present a comprehensive look at the policies and prejudices that have made home ownership and generational wealth a pipe dream for racial and ethnic minorities whose high rates of housing foreclosure and inability to finance homebuying are, you guessed it, not due to “bad choices” but to bad policies. They break down why “women’s work” in the U.S. is a recipe for poverty: The concentration of women in low-wage jobs may benefit the employers and owners of the nursing homes, hospitals and fast-food restaurants that hire them but does little to provide some of our society’s hardest workers with access to a decent standard of living.

In their section on political power, Goldblum and Shaddox present a powerful case that the United States’ vaunted government “of the people, by the people and for the people” comes with a silent modifier: “except the poor people.” The government that low-income people encounter is far more likely to take rights away rather than protect them, from the intake worker who decides they don’t quite qualify for aid or the child welfare worker who questions how good their parenting can be if they’re working two jobs and still can’t afford diapers. Poor people in the U.S. generally do not find themselves spending quality time in the halls of Congress where the average wealth of members is more than $500,000; the Center for Responsive Politics reports that about 48 percent are millionaires. Electoral politics are a sport for the wealthy, Shaddox and Goldblum say, and officeholders are often oblivious to working-class and low-income concerns.

Broke in America: Seeing, Understanding, and Ending U.S. Poverty is both a primer and a roadmap for how to go forward. It isn’t for the faint of heart: the facts it presents are unsettling… But for anyone who wants to see things change, the facts are the place to start.

The real pleasure of Broke in America is that it is not only descriptive but prescriptive, providing concrete strategies answers to the question, “Yes, but what can I do?” A lot, as it turns out. As the authors write, poverty is not gravity. It isn’t something that has to be accepted with a shrug as “just the way it is.” It has causes and it has solutions. At the end of each chapter, Goldblum and Shaddox have included a section titled “What Can I Do?” offering practical suggestions that can make a difference, and conversations to be had with legislators and political leaders that can alter the policies that glue poverty in place. It’s important to remember that it’s glue, not granite, that keeps poverty in place, and the book is chockful of suggestions to dislodge it.

The last section, “Solutions,” presents the possibility that the poor do not always have to be with us. People are poor because they don’t have sufficient money to pay for the things they need—a straightforward problem requiring a range of approaches to solve. The past year has served to hold the economic and social fissures plaguing our country in high relief. More and more people have slipped from “making it” to “barely hanging on,” and those who were barely hanging on before the pandemic now find their economic circumstances frighteningly diminished. The poisonous effects of racism and the glaring inequalities baked into our political, economic and social structures have never been more visible. If ever there were a time for Americans to reevaluate and regroup, this would be it.  Broke in America: Seeing, Understanding, and Ending U.S. Poverty is both a primer and a roadmap for how to go forward.

It isn’t for the faint of heart: the facts it presents are unsettling, indeed, heartbreaking. But for anyone who wants to see things change, the facts are the place to start.