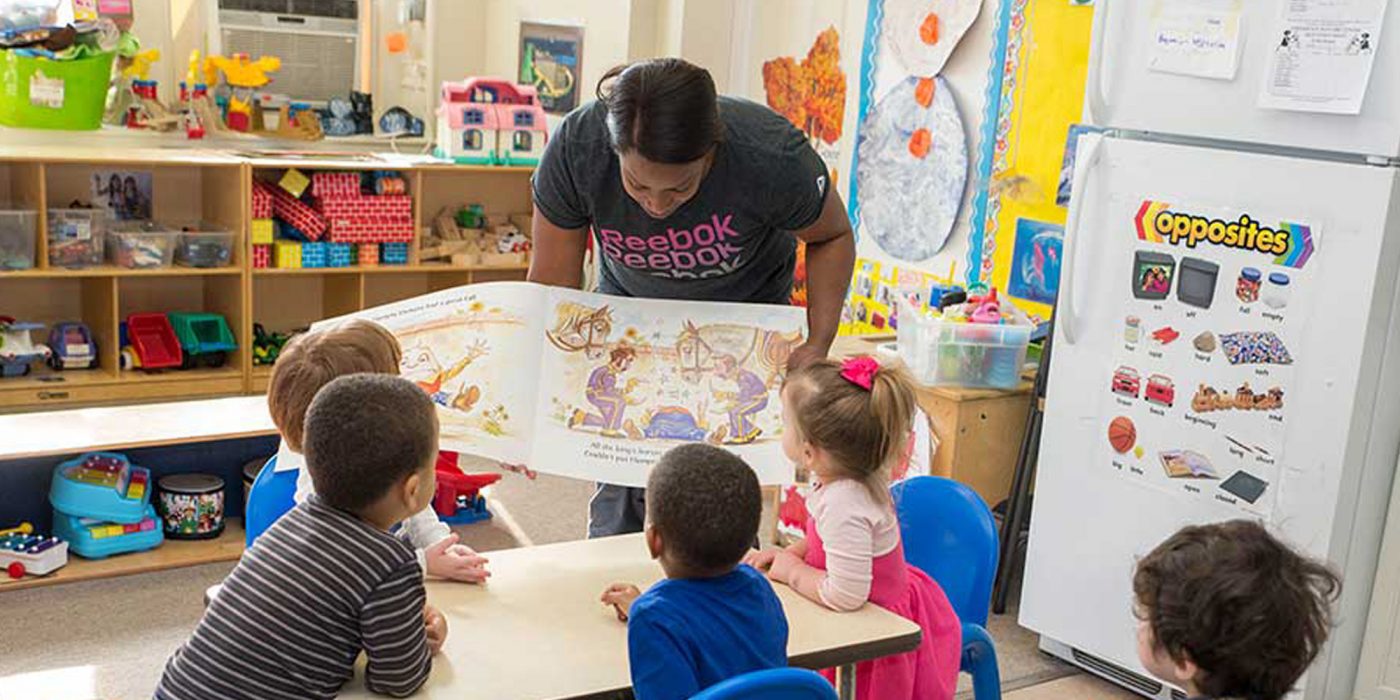 As the U.S. finally appears to be coming to grips with how essential childcare is to future economic growth—and how unworkable our present paradigm is—the net is being cast far and wide for solutions that could have an impact. Philadelphia’s pioneering Childspace Daycare Center offers one possibility worth considering and worth replicating.

Childspace is a worker cooperative, one of the few in the child care sector, owned and governed by its staff. It has been in business continuously since 1988, when Philadelphia friends Teresa Mansell, Cindy Coker and Karen Guyton gave up on finding good child care for their infants and decided to create their own daycare. Within three weeks they were joined by Susan Kavchok, another young mother, who is now the organization’s CEO.

The center’s dual structure as both a nonprofit and a corporation has allowed it to access different pools of funding, with the worker co-op—the corporation—accessing business-related funding and the nonprofit tapping foundation resources.

“We had a fairly big group of women who had children and were all thinking about how we were going to get back to work,” says Mansell, now president of the Childspace board. “We realized there was not a lot of infant care in the city. We thought about having a small center in Cindy’s house and realized that we wouldn’t be able to have enough kids to pay ourselves a salary.

“Karen was a member of a church that had some space. The pastor was new, and Karen approached him about renting some. He said, ‘It would be great to have a child care program because it might bring in some young families to the church.’

Mansell and Coker had experience with the cooperative model because they were both working at the Philadelphia Area Cooperative Enterprise (PACE), which was converting a chain of defunct grocery stores into owner-operated supermarkets. The worker-owner model made sense to them from the start, in part out of a conviction that bringing more minds to the table would create a stronger, richer organization. The first center, which served 35 children, was in the women’s neighborhood, the Mt. Airy section of Philadelphia. Coker’s husband, the late Sherman Kreimer, a lawyer at PACE, helped them set up its legal framework.

Kavchok joined the team about a month in because she, too, had an infant and couldn’t find child care.

“Initially it was really about me having my child come where the other kids were socializing,” she says. “I started part-time, and my goal was to just be there a little while before I went off to do my own thing.

Though parents in the Mt. Airy location were teachers, doctors, attorneys, accountants and other professionals and could afford to pay the full cost of the program, the Childspace founders wanted to serve a more diverse population and soon opened a new location in the less-affluent Germantown neighborhood. They applied for government contracts to receive child care subsidies at this expansion site—Childspace Too—and about 75 percent of its families received subsidies.

“We were able to support that high level of subsidy because Childspace Mt. Airy, our first center, had a high level of full-pay families that covered that gap in subsidy funding.  Not many childcare businesses can survive starting up with that level of subsidy and not have support from some other sources.”

The center’s dual structure as both a nonprofit and a corporation has allowed it to access different pools of funding, with the worker co-op—the corporation—accessing business-related funding and the nonprofit tapping foundation resources. Childspace’s status as a minority-owned, woman-owned business, along with top ratings from the state and the National Association for the Education of Young Children (NAEYC) have given access to quality funding sources. In the financial patchwork quilting recognizable to anyone who has worked with a nonprofit, funding comes a little from here, a little from there.

“Funders are never going to just hand you your operating expenses,” Kavchok says. “So, you have to put 10 percent of this grant over here and 5 percent over there to do what you need to cover all your expenses.” Childspace has earned some good help with that: The Ms. Foundation has funded the organization for nearly 30 years. And grants from funders including the Pew Charitable Trusts and the Catholic Campaign for Human Development have enabled Childspace not only to carry out its core mission of providing childcare but to do advocacy work for the field. The organization is tying up a four-and-a-half-year grant from the William Penn Foundation that has supported Childspace in providing parenting training for vulnerable families.

Childcare cooperatives are unlike other worker-owned co-ops where employees join because they are interested in the co-op model and want to be owners. In the child care space, employees simply care about children and want to work with them. Employees must work at Childspace for one year before they are eligible to become owners and then they pay $250 for a membership fee and a share in the business. Though many co-ops pay their worker-owners dividends in profitable years, for the most part, Childspace has reinvested its profits. Some years, worker-owners have voted to give themselves a bonus, which has ranged from $100 to $1,800 in an unusually good year.

But Mansell and Kavchok laughingly stress that no one is in it for the money. Being a worker-owner involves a significant time commitment and not all employees choose to go that direction. Mansell says the founders encourage employees to become owners, but they don’t push. The reasons an employee would not want to become an owner are varied, often coming down to the amount of time involved, the responsibility and the feeling that their perspective is already well-represented in the existing management system, which is heavy on employee input.

“Because we have meetings on a regular basis,” Mansell says, “and ask for input if we’re considering policy changes or things that might affect our finances, our employees sometimes feel like, ‘Well, I can just tell you my thoughts and I know my voice is going to be heard,’ so they don’t choose to be owners.

Having a voice at the table is one of the primary benefits in becoming an owner, the founders say, but not the only one.

“A lot of what we do is that we basically are teaching them to be responsible businesspeople,” Kavchok says. “We’ve had people who sit at the worker-owner table say, ‘Ultimately, my goal is to open a child care center of my own.’ And they do learn that. The first year that they’re on the worker co-op board, they are required to be on the financial committee where they’re helping develop and review budgets, doing financial reports, looking at balance sheets. This is a critical piece if you want to operate your own business, and they learn that every day as worker-owners.”

Childspace representatives have served on state boards such as the Pennsylvania Child Care Association and have developed resources such as a “cost of care” program they share with other childcare centers to help them understand how to set their rates, and to access and advocate for subsidies.

When the determined group of women started Childspace more than three decades ago, their vision was of a network of worker-owned co-ops across the country. That hasn’t happened yet, but their hope is that their example and the many lessons learned can help lead the way for others. They didn’t have any role models or road maps when they started but now, they say, they can provide both.