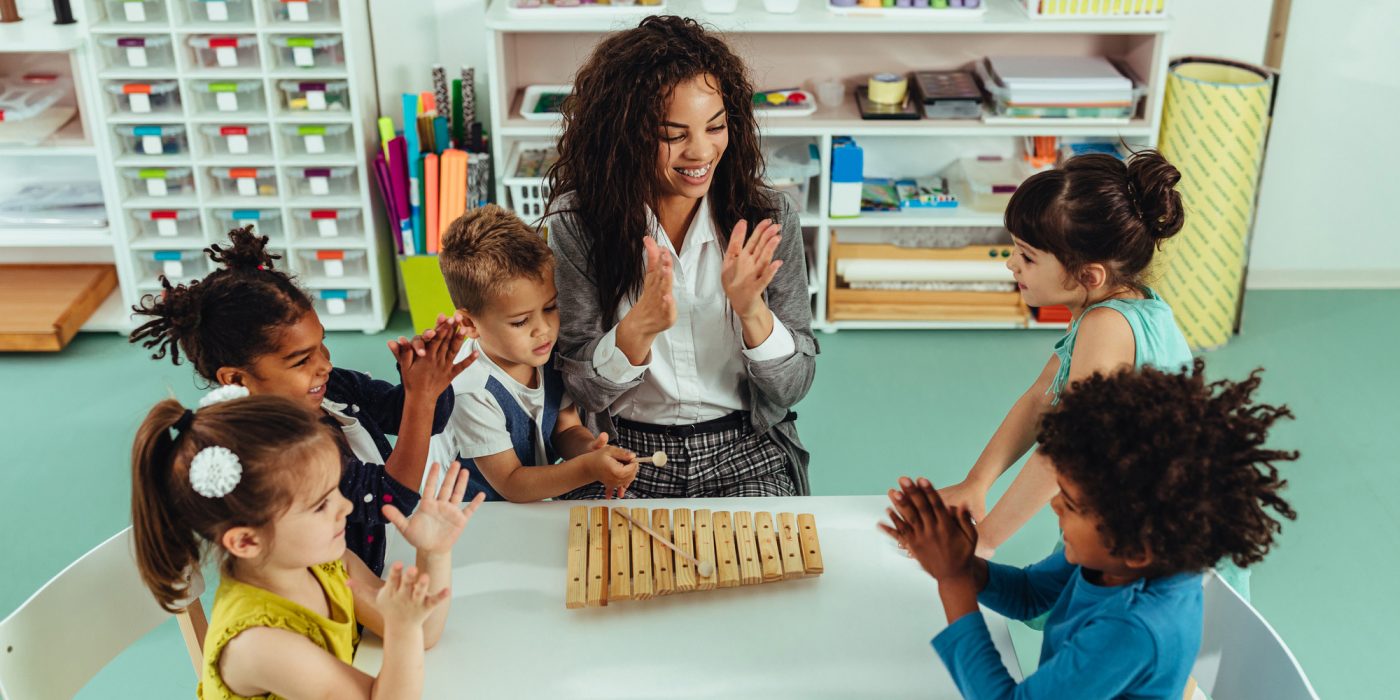 Erin Kirkley, 25, of San Antonio, Tex., discovered the Ella Austin Community Center last year when she brought her baby son Jaxson there for child care. Now she’s teaching in a classroom across the hall from his. “They were short-staffed and needed help,” she recalls. “They were willing to work with my schedule.” Kirkley’s other responsibilities include taking care of her 27-year-old autistic brother and preparing for the arrival of her second child in January. Kirkley was in her second year of San Antonio College when she had Jaxson, and she may eventually go back to school, but she says she’s planning to stick with Ella Austin for at least another five years.

According to Emily Sharrock, associate vice president, Bank Street Education Center, this way of identifying teachers has long been part of the Head Start model. “They do a great job of partnering with parents, providing support and opportunities for learning, as well as building authentic leadership roles for them,” she says.

Today, recruiting parents to teach Head Start may be more urgent than ever. Regions as disparate as southwest Iowa, Central Susquehanna, Pa. and western North Carolina are experiencing instructor shortages. Early Head Start (which serves families with children under three, year-round) and Head Start (which usually follows a traditional school year for children ages three to five) must comply with teacher-pupil ratios set by the federal government, so packing more children into each classroom is not an option. When the numbers don’t add up, sites are forced to shut down—often with little or no warning.

The issue predates the pandemic, but the recent shortages are especially dire. Pay increases haven’t kept pace with those working in retail (thanks to Early Learning Nation contributor Elliot Haspel for pointing out this NBER study highlighting the wage gap), and some teachers have been leaving early education for public schools, which usually pay better. Others take second jobs in order to make the work sustainable.

As Rebeka Woldegiorgis can attest, parents becoming teachers isn’t a new idea. She started working as a Head Start teacher 17 years ago at the Arlington, Va., site that her third of three children attended. “I was planning to become a medical assistant,” she recalls, “but where could I put my kids?” She started as a volunteer and eventually took a full-time position.

Dennis Deloach, Head Start program manager at Northern Virginia Family Service (NVFS), laughingly describes hiring parents as just an extreme manifestation of the organization’s commitment to engaging them in their children’s education. NVFS normally employs over 200 teachers, including Woldegiorgis; currently it is operating at about half capacity.

1. The federally funded program arose in 1965 as part of President Lyndon B. Johnson’s War on Poverty.

2. Head Start serves more than a million children every year, in every U.S. state and territory.

3. The program delivers services through 1,600 agencies in local communities, mostly by nonprofit organizations.

4. It includes health and family well-being support, in addition to early education.

5. Programs are available for American Indian and Alaska Natives, as well as the children of migrant and seasonal workers.

Read a brief history and overview from the First Five Years Fund.

“We address the needs of the entire family,” Deloach says. “Most of the families we see need more than one type of assistance.” Employment services might result in a teaching career, but the mothers of some Head Start children opt for other paths, including administrative roles through the Training Futures program.

NVFS mother-turned-teacher Chinda Kry says she thought she wanted to work in the judicial system, perhaps as a probation officer, but education turned out to be a better fit. As an added bonus, her job experience “has improved family dynamics because it helped me understand my children a lot more.” For example, she says, it helps with using positive words (telling them what they should do), instead of negative ones (telling them no). As a parent of a son with Down syndrome, Kry is learning to guide him to do things on his own instead of babying him and says she is better able to track development milestones. She is pursuing a bachelor’s degree in special education.

Fetlework Bezabeh’s teaching journey reflects a similar pattern. A single mother of two, she had some accounting experience and planned to continue down that route, but it became difficult to align her work schedule and her family. “At first,” she admits, “I did not know much about the kids, but NVFS taught me a lot about child development and how I can assist the children here and my own children at home.” In the future, Bezabeh plans to become a database administrator and is taking classes to reach that goal.

Deloach passionately believes in the way his organization integrates Head Start into its overall services. Its Early Head Start program has a home-based component and even provides diapers and other necessities. “We try not to have any barriers,” he says.

His own life history backs up his belief in the power of Head Start. He and his five siblings all attended the Head Start in Birmingham, Ala. where their mother worked for 35 years (she was also a receptionist, cook and school bus driver). Head Start even sent her to school to get her bachelor’s degree. “She was my first teacher,” he says, “and now I’m making that happen for other children.”