The Wheels on the Bus: Save the Children’s Mobile Education and Nutrition Units 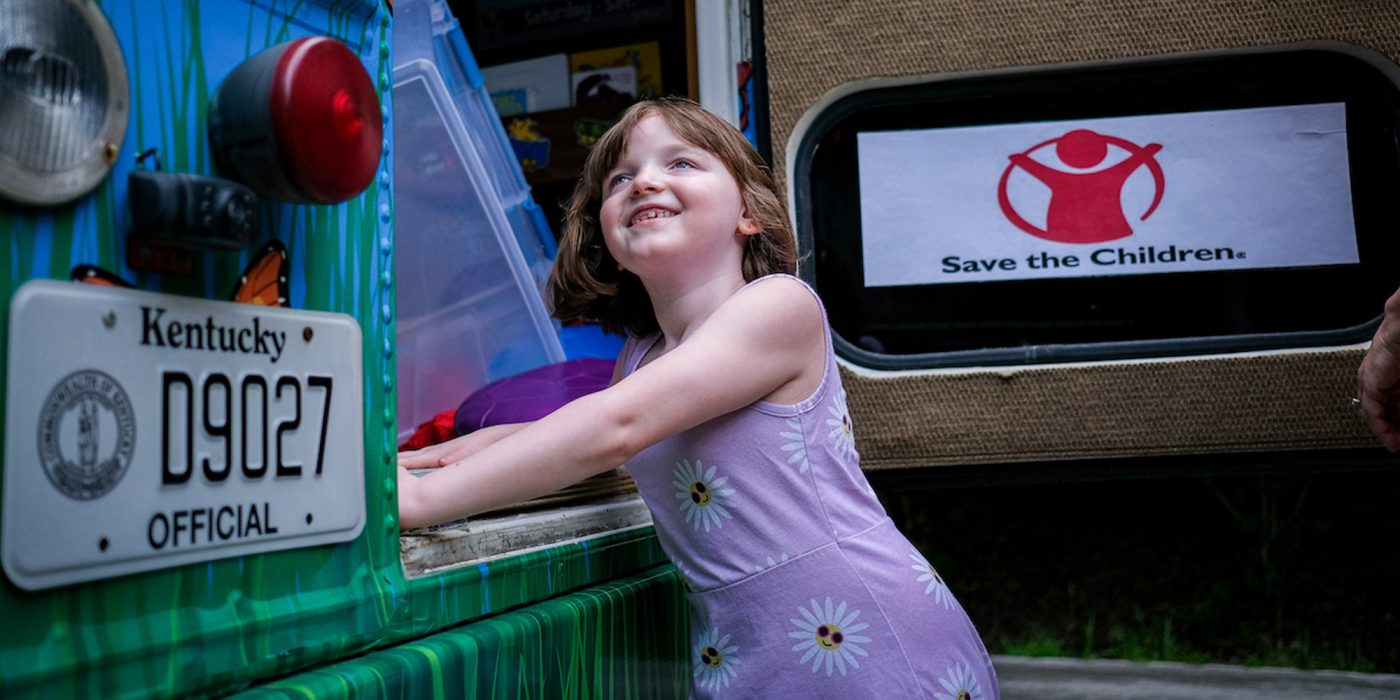 The ice cream truck, that American institution, is brilliant in its simplicity. Rather than waiting for kids to show up at your ice cream parlor, you bring the frozen treats to the kids, at the playground or wherever they are. The same logic underlies Save the Children’s mobile units—converted vans and buses that fight child hunger and increase access to early learning supports in 25 rural communities in eight states: Arkansas, California, Kentucky, Mississippi, South Carolina, Tennessee, Washington and West Virginia.

Just like ice cream trucks, the colorfully decorated vehicles attract children of all ages, but the organization has discovered an added benefit. In the most remote areas of the community, some families can be wary of unmarked vehicles approaching their home to deliver home-based early learning programs. Murals on the side signal their friendly intentions.

“During the pandemic, we felt compelled to respond swiftly to the isolation of families with young children by meeting families where they are,” says Lindsey Lockman Dougherty, an advisor on early childhood development for Save the Children. “And in each case, the efforts became so popular and appreciated that we are continuing and expanding the approach to reach the most isolated and underserved members of the community.”

A Tribute to Dad

Peggy Hamby’s official title is director of Food Service & Nutrition for the public school system of Morgan County, Tenn., but on Tuesdays she goes the extra mile—and then some. Riding Gus the Bus, she travels the winding roads of the county, delivering not just food but books and educational materials to 250-300 families as part of the local schools’ partnership with Save the Children.

“All the kids know that Gus comes on Tuesdays,” she says. “It’s something to look forward to.” For Hamby, Gus’s mission is especially personal; the bus is named for her late father, who worked as a mail carrier in the community. She and the bus drivers decorate the vehicle and dress up for Christmas in July and Hawaiian Day, among other celebrations.

She knows everybody on the route and describes a family living temporarily in a motel, numerous seniors raising their grandchildren and a 16-year-old who watches three younger siblings—who all rely on the spaghetti, chicken fajitas and other prepared meals as well as groceries, including fresh local vegetables courtesy of No Kid Hungry. Hamby points out that distributing food in this manner is only possible because USDA restrictions have been temporarily relaxed during the pandemic, but she hopes, on behalf of the families, that things stay this way.

Tamara Sandberg, Save the Children’s U.S. Food Security and Nutrition Senior Advisor, adds that the USDA’s COVID waiver concerning “non-congregate feeding” has allowed for creative solutions in offering enrichment opportunities to children, even when they do not consume the meals on site. Save the Children and partners are urging Congress to extend USDA’s authority to issue nationwide waivers through the 2022-23 school year to help child nutrition providers maintain critical flexibility in how they reach kids with the food they need.

Turning on a Dime

Save the Children Kindergarten Readiness Ambassador Kim Bolling admits she was less than thrilled at first about the prospect of driving Rosie the Readiness Bus around Perry County, Ky. The narrow, bumpy roads made her nervous, but she knew something had to change. Some areas in the county lack any preschool programs, and attendance had been less than stellar at the three Play & Learn Group locations set up in community settings by the local school district and Save the Children.

Bringing food, four books per family each month and family engagement programming to families made a lot of sense, especially when families lack transportation, along with phone, internet and other basics. “My family didn’t have a lot when I was growing up,” Bolling says. “As the child in a single-parent home, I would have benefited from a program like this.”

Just like ice cream trucks, the colorfully decorated vehicles attract children of all ages, but the organization has discovered an added benefit. In the most remote areas of the community, some families can be wary of unmarked vehicles approaching their home to deliver home-based early learning programs. Murals on the side signal their friendly intentions.

Rosie got rolling just as the pandemic hit, and Bolling had added motivation to brave the roads—families in her community needed help. “We never stayed stationary,” Bolling recalls. “I never thought about the risk.” Often in the company of other family-serving professionals, Bolling offers daily “classroom on wheels” programs—Movement Monday, Try It Tuesday and so on—to 40 families, who receive books, art and school supplies, sanitizer, masks, Vroom kits and occasional extras like snacks and rubber duckies.

In partnership with Susan Sizemore, one of Save the Children’s Collective Impact advisors, families received food boxes through Farmers to Families until last May when the USDA program ended. On one especially cold day, every mom along the route was so moved by Rosie’s appearance that they each wept. Many organizations provide contributions to Save the Children, including board games and, once, a tiny dress from the Salvation Army turned out to be one little girl’s favorite birthday present. Sidewalk chalk, which became a scarce commodity early in the pandemic, proved especially popular.

And those narrow Kentucky roads? “Now I can turn Rosie on a dime,” Bolling smiles.

A Learning Experience on Wheels

The largest private sector employer in Cocke County, Tenn recently ceased production. Standing close to the North Carolina border, the county has high rates of substance abuse, child abuse and other woes that often accompany poverty. Jennifer Ellison of the Cocke County Cradle to Career Coalition—initiated by Save the Children—says an important element of her job is to coordinate targeted, collective impact approaches that advance learning outcomes for all children in the community, to keep kids and families from falling through the cracks. Since “kids can’t learn if they’re hungry,” supplying food and meals is critical to addressing barriers to learning for many children in the county. Until last May, they also distributed food boxes through the USDA Farmers to Families program. Since that time, the community is taking new approaches to increase access to food and learning resources, including a brand-new mobile unit.

The ABC Bus (it stands for alphabet, books and creativity) is covered with pictures of mountains, bears, apples and butterflies designed by an alumna from the local high school. Ellison says it’s equipped for everything children need to learn—activity areas, learning materials, digital devices, a generator, Wi-Fi, heating and air conditioning. Additionally, the bus is equipped with storage to support food distributions throughout the community.

Stops on the ABC Bus’s route will include the Walmart parking lot, public libraries and public housing in and around the community. In areas of the county where there have been challenges to reach families, families have been eager to come out and engage when the ABC Bus rolls into their neighborhood. Ellison mentions a father and his shy son who visited the bus during a recent stop in their neighborhood. After an hour of carefully exploring the bus together inside and out, the boy’s only words were a cheerful bye-bye when he left.

Ellison and her ABC Bus sidekick, Kathy Holt, both agree that one of the best outcomes from the initiative has been the tidal wave of volunteerism it has incited. “I’ve asked 12 people for help,” says Holt, “and 12 people have said yes.”

To learn more about helping rural communities fight child hunger through innovative and adaptive solutions, you can join the virtual 2022 Rural Child Hunger Summit on April 27-28. You can register for the free event, presented by Save the Children and No Kid Hungry, at https://bestpractices.nokidhungry.org/events/ruralchildhungersummit2022