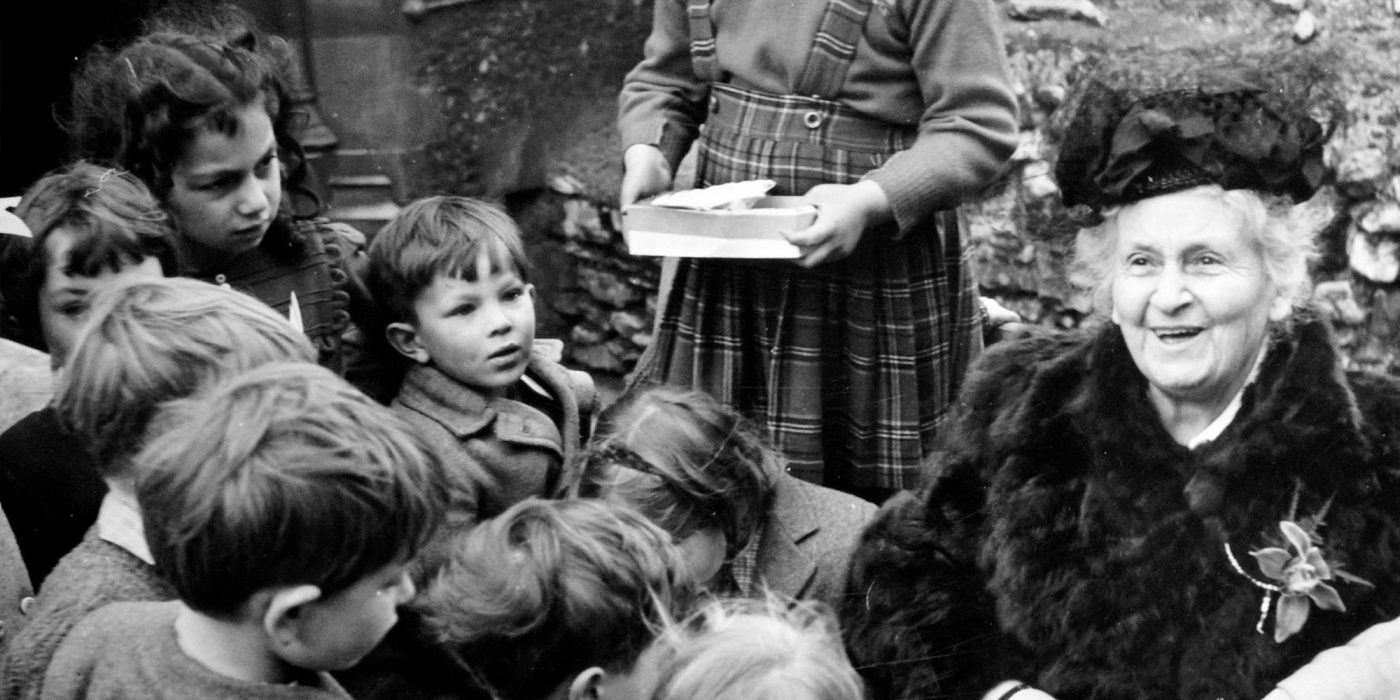 Photo courtesy of the archives of the Association Montessori Internationale.

Part I: From Italy to the World

Maria Montessori (1870-1952) might not be quite as famous as her near contemporaries Sigmund Freud (1856-1939) and Albert Einstein (1879-1955), but she has arguably had just as sizable an impact on the course of human civilization. Well into the 21st century, Montessori continues to influence how young children are taught, and biographers and scholars continue to study the education pioneer and her thinking. As with Freud and Einstein, debates continue about her relevance, her value and whether or not she has been properly understood.

Origins of a Revolutionary and Visionary

The educator and physician was born just as Italy came into its own as a single country. Biographer Rita Kramer describes young Montessori as “self-confident, strong-willed, a little smug. She has the sense of duty that sometimes makes for intolerance of others. In short, a born social reformer.”

These traits helped her to overcome 19th-century prejudices about women, becoming one of the first female medical students in Italy. “Eventually,” she declared, “the woman of the future will have equal rights as well as equal duties. She will have a new self-awareness and will find her true strength in an emancipated maternity. Family life as we know it may change, but it is absurd to think that feminism will destroy maternal feelings.”

In 1907, Montessori founded the Casa dei Bambini for 3- to 6-year-olds in the slums of Rome’s San Lorenzo quarter. A New Yorker review of Christina de Stefano’s recent biography calls Montessori’s approach “prophetic in ways that remain uncanny,” citing her decision to do away with reward and punishment, and her emphasis on self-regulation.

Influences on these breakthroughs included:

👉 Theories of developmental stages (The Montessorian)

Observation also shaped Montessori’s thought. She often described the epiphany she had while watching a waif in the street playing with a small piece of colored paper, completely absorbed in the scrap. This absorption (a favorite word of hers) she compared favorably to classrooms where the children are “like butterflies mounted on pins, are fastened each to his place, the desk, spreading the useless wings of barren and meaningless knowledge which they have acquired.”

In a throwback to the one-room schoolhouse of yore, a critical aspect of Montessori’s vision was that children of different ages belong in the same classroom. “To segregate by age,” she insisted, “is one of the cruelest and most inhumane things one can do, and this is equally true for children.” (A Montessori “primary” classroom, or Children’s House, typically groups 2.5-6-year-olds together.) Students gained by learning from those older than them and by teaching those younger than them.

Lynne Lawrence, Executive Director of Association Montessori Internationale (AMI), summarizes: “Children’s capacity to learn is multiplied because they are learning mostly from the other children. So the teacher is released into observing and then showing key things to the children, in line with what they think their interests are.”

Montessori’s educational outlook arose in a period of intellectual ferment, alongside numerous competing philosophies, some of which survive to this day, including those devised by:

Dr. Angeline Lillard, professor of psychology at the University of Virginia and author of Montessori: The Science Behind the Genius, emphasizes the social context in which Montessori operated—and how it explains one of the most misunderstood aspects of her approach. “People used fantasy to manipulate children,” she says, citing “the whole idea that Santa Claus would give you coal in your stocking or the Sandman would come and hurt you. Montessori was against manipulating children with threats and lies. She thought you need to be honest with children and respect them.” (Part II of this series addresses the opposition to fantasy and other Montessori myths.)

AMI’s Educateurs sans Frontières partners with communities and governments “to advance human development from the prenatal stage to early childhood care and education, continuing through to elementary, adolescence, adulthood and the elderly.”  [Read more]

AMI’s Educateurs sans Frontières partners with communities and governments “to advance human development from the prenatal stage to early childhood care and education, continuing through to elementary, adolescence, adulthood and the elderly.”

As an example, Lawrence cites efforts in Mexico, where they work in prisons with mothers and their babies. “This is the sort of side of Montessori that lots of people just don’t see,” she says, with “high-quality Montessori interactions, high-quality environments inside and outside the classroom.”

She also describes work in Tanzania and Kenya and a South Africa initiative projected to serve “hundreds of thousands of children in informal child care situations, in remote areas and in the townships.”

AMI is developing a six- to eight-week program delivered by diploma holders who have been trained by trainers to deliver it. “It’s much more grassroots and collaborative than anything we’ve ever done.”

The Montessori approach grew in popularity during the early 20th century, and its influence spread to the United States with the help of magazine publisher S. S. McClure, who saw her as the savior of American education. (“People do sometimes seem to have kind of a religious worship about her,” says Lillard, “and that’s not to the benefit of anybody.”) Quotable pronouncements boosted her fame:

“Education must begin at birth.”
“The hand is the instrument of intelligence.”
“The child who concentrates is immensely happy.”
“It is necessary that the child teach himself.”
“Education is the best weapon for peace.”

Montessori continued to refine and redefine her ideas on education, lecturing and traveling extensively as well as quarreling with rivals and disciples alike—among them Jean Piaget and Erik Erikson. “She was a genius,” says Lillard, “and geniuses can be prickly.”

Starting in late 1939, she spent seven years in India, having become involved with a spiritual movement known as theosophy. (Other prominent adherents included Lewis Carroll of Alice in Wonderland fame, the Irish poet W. B. Yeats and Wizard of Oz creator L. Frank Baum.) She died at age 81, having taken steps to secure the legacy of the educational theories and techniques that bore her name.

Her son Mario and granddaughter Renilde were also instrumental in helping spread her ideas and keeping them focused. The establishment of namesake institutions suggests both the range of her influence as well as the somewhat circuitous paths her legacy has taken.

Based in Amsterdam, AMI administers training and certification for Montessori teachers all over the world. Its Educateurs sans Frontières division (see sidebar) helps to spread her methods globally. AMI’s U.S. affiliate is AMI/USA, led by Ayize Sabater (cofounder of the Black Montessori Education Fund). A separate organization, the American Montessori Society (AMS), also has international members, despite its name.

Lillard says AMI is committed to keeping the pedagogy similar to what Montessori created and “changing it only where it really seems to make sense,” whereas AMS was founded on the idea of spreading it quickly. “If it weren’t for AMS,” she says, “We might not even have Montessori anymore.”

For Lawrence, the central question is How do we go to scale without losing quality? “We’ve taken hold in over 147 countries,” she says. “That speaks for itself; it’s like a dandelion scattering seeds.”

Today’s schools with Montessori in their name offer varying degrees of fidelity to Maria Montessori’s original vision. Still others offer “Montessori-inspired” curricula. Montessori Census, a project of National Center for Montessori in the Public Sector, collects up-to-date data on public and private Montessori schools around the world as well as the dozens of national and regional associations dedicated to carrying on this rich and complex legacy.