Vocabulary for the Win with Conversational Turns

A Scalable Program for Early Learning 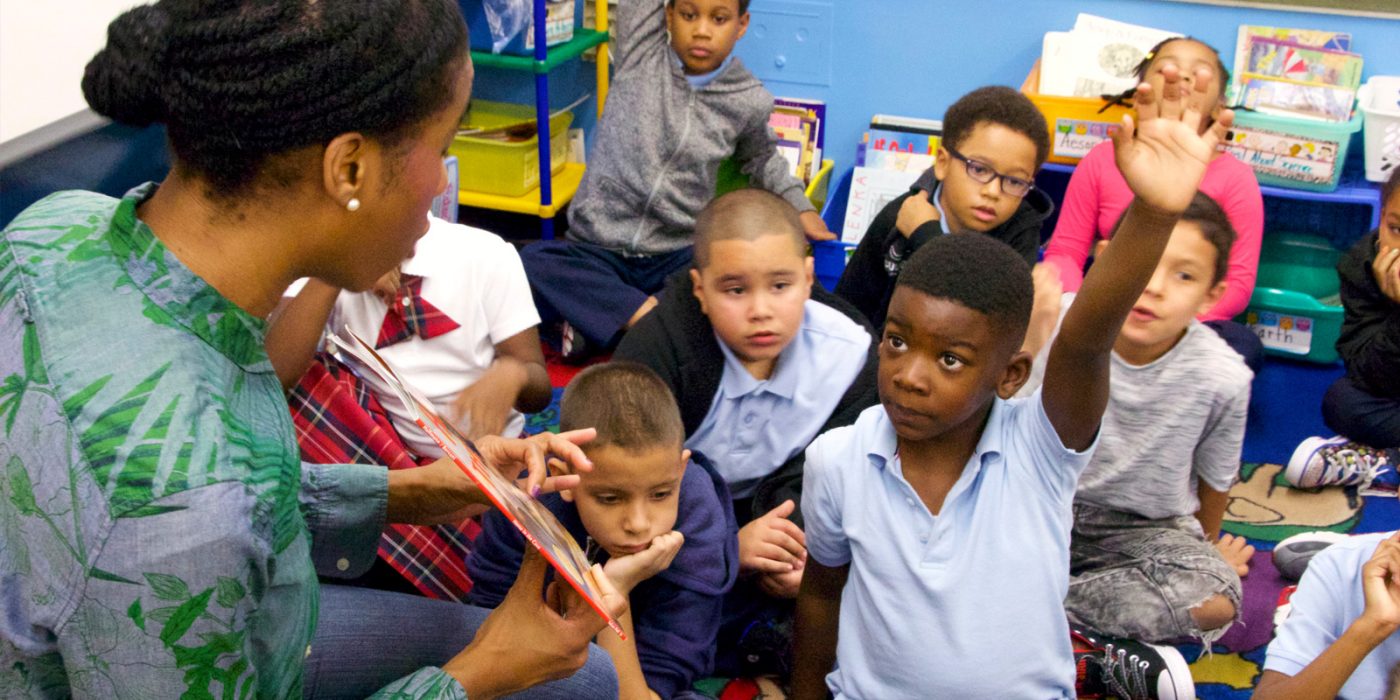 Photo courtesy of 'The World of Words,' Department of Teaching and Learning, New York University, NY

The massive inequality that characterizes children’s opportunity to learn and succeed in the U.S. is no secret. Children who have a basic knowledge of reading and math by the time they enter school are more likely than their peers to be successful academically, attain higher levels of education and secure employment in later years. But as early as 18 months, children in lower socio-economic circumstances already experience disparities in vocabulary and language processing compared with their higher-income peers—a gap that continues to widen without intervention. The playing field for children in poverty is a mountain. We now know this.

What we don’t yet know is how to address the tragedy on a scale that’s a match for the mountain. Researchers have demonstrated some encouraging interventions, but, says New York University professor and child-literacy authority Susan Neuman, the majority of this work has been small-scale studies conducted in optimal conditions.

“Most of our interventions,” Neuman says, “were with about a hundred kids. We wanted to move beyond that. We wanted to focus on thousands of children and see if could provide an intervention that could help children grow, knowing that teachers seem to have little time to teach vocabulary.”

From her years as a researcher, educator, and early learning and literacy policymaker, Neuman knew that vocabulary offers the keys to the kingdom for children’s learning; she also knew that vocabulary is rarely taught in school. In 2007, she developed a supplementary curriculum for pre-K through first grade called World of Words. The idea was to teach vocabulary in a way that excites children and encourages them to be eager for words that can help them negotiate their worlds—eagerness is the key—and to provide teachers a supplemental curriculum that supports them in teaching those words.

“We were using the World of Words, a curriculum that we created in 2007, at schools throughout the Bronx in New York—one of the areas in the country with the highest poverty,” Neuman says. In the Bronx, a New York City school district, more than 176 languages are spoken and many of the children need a great deal of support learning English. “Teachers may struggle with how to teach kids who are bilingual. Teachers look at their multilingual classes and say, ‘What can I possibly do?’

“What we do is read aloud to the children and introduce them to what we call ‘exciting topics,’” she says. “Wild weather, the mysteries of science—they’re fascinated by these things. We wanted a curriculum that would really engage them and give them a reason to communicate and talk with others. You can’t have a conversation if there’s nothing to talk about. World of Words plugs into their curiosity and fascination.”

Evidence from a number of trials showed encouraging results in teaching children through the World of Words curriculum. The lessons were heavily scripted, some featuring word-for-word scripts for what teachers were to say, to ensure fidelity to the design. The results were an improvement, but teachers struggled to incorporate and master the strategies in the designed curriculum and frequently weren’t able to replicate the researchers’ progress. Neuman and her research team knew that the teachers were the key if a scalable program were to be possible. If teachers didn’t embrace the program, it just wouldn’t catch on.

In looking at what was missing, Neuman realized there wasn’t any room in the program for teacher agency and individuality.

“There are local strategies that teachers know regarding how to deal with their students that someone like me can’t even imagine,” she says. “We’ve got to allow teachers to adapt and create on their own within an overall structure.”

The solution was a “soft-scripted” program that provides an overall framework with sufficient room for the teachers to respond in the moment as their individual classes interact with the material. There are non-negotiables in terms of content and structure, but also autonomy for the teacher to adapt in real time.

“For example, in this particular curriculum, we teach words through taxonomies—the categories that can help children infer meaning. So, for example if I know that a banana is a type of fruit and a strawberry is a type of fruit, I can infer that fruit is good for children to eat.

“One of the questions we always ask is, ‘What is similar and what is different?’ And this is what we learned: The ‘script’ in the program encouraged teachers to talk about similarities and differences, but this teacher recognized that the children didn’t know what these terms actually meant. So, the teacher stopped—good teachers stop—and did a whole mini-lesson on the terms ‘similar’ and ‘different.’ It was a lovely example of a teacher taking the time to know when their children weren’t getting it.

In another example, the lesson focused on shapes, and the teacher asked the children, “What is a triangle?” One of the children responded, “A triangle has three sizes!” Instantly the teacher recognized that the child didn’t understand the properties of a triangle.  So, she stopped the lesson, went to the board, and illustrated what a triangle looked like, emphasizing the words “sides.”

“That lesson was never scripted, but she had the wherewithal to realize that the children weren’t getting the question and to address it.”

Another place where Neuman and her team saw that the scripted program wasn’t working was in its instruction to have the teachers ask open-ended questions, such as, “What did you think about that story?”

“It turns out that the teachers were never asking the higher-order, open-ended questions—for a variety of reasons. If I ask an open-ended question, I may not understand what the child is saying and may need more time for them to explain. He might take up to a minute and while that is going on, what are the other kids doing? They’re getting unruly. So, the teacher has her eye on all the kids in the class and just skips the open-ended question.”

The solution, Neuman found, was our old friend conversational turns, that serve-and-return interaction that keeps a conversation going. The practice of shared book reading has been proven to contribute to children’s vocabulary and comprehension, but studies suggest that it’s the “extratextual talk” that surrounds the book-reading that really amplifies the children’s understanding.

Recent studies using LENA (Language Environment Analysis) recorders have found that the number of conversational turns the children and teachers engaged in positively related to increases in vocabulary size and language development. Magnetic resonance imaging of children engaged in conversational turn-taking showed greater neural language processing over and above just the number of words they heard.

Drawing on this research, Neuman and her team developed a set of question prompts in the lesson plans that support this kind of active engagement throughout the story-reading.

“You have to be listening in a conversation like that. With rapid conversational turns, I’m encouraging all the children to respond at the same time in an engaging way. It helps children practice that language. It’s especially good for the second-language learners because they’re not being singled out. We tell the teachers to pretend that the children are waiting for a train and the teacher has to do something quickly to get them engaged before they’re off. We work on rapid responses to keep the children in the conversation.”

In 2017, Neuman and her research team launched a study of more than 1,000 randomly selected children in pre-K through the first grade from the Bronx school district for a 21-week intervention employing this redesigned “soft script” curriculum. The results were enough to make any early-learning advocate smile.

“For one thing, we had 16 pages of testimonials from the teachers, saying how much they like this approach,” Neuman says. “We interviewed them after the study and they said they like it because it provides the opportunity for them to bring their own personality and views into the lesson. They also love that it’s content-driven and that the children are getting to know more about science.

“So many of our kids in the elementary grades never hear anything about science—and they love learning about the mysteries of space, about wild weather. Engaging the kids in these interesting topics is a way for them to feel smart—and these kids experience tremendous joy when they know they’re learning.

Vocabulary for the win!