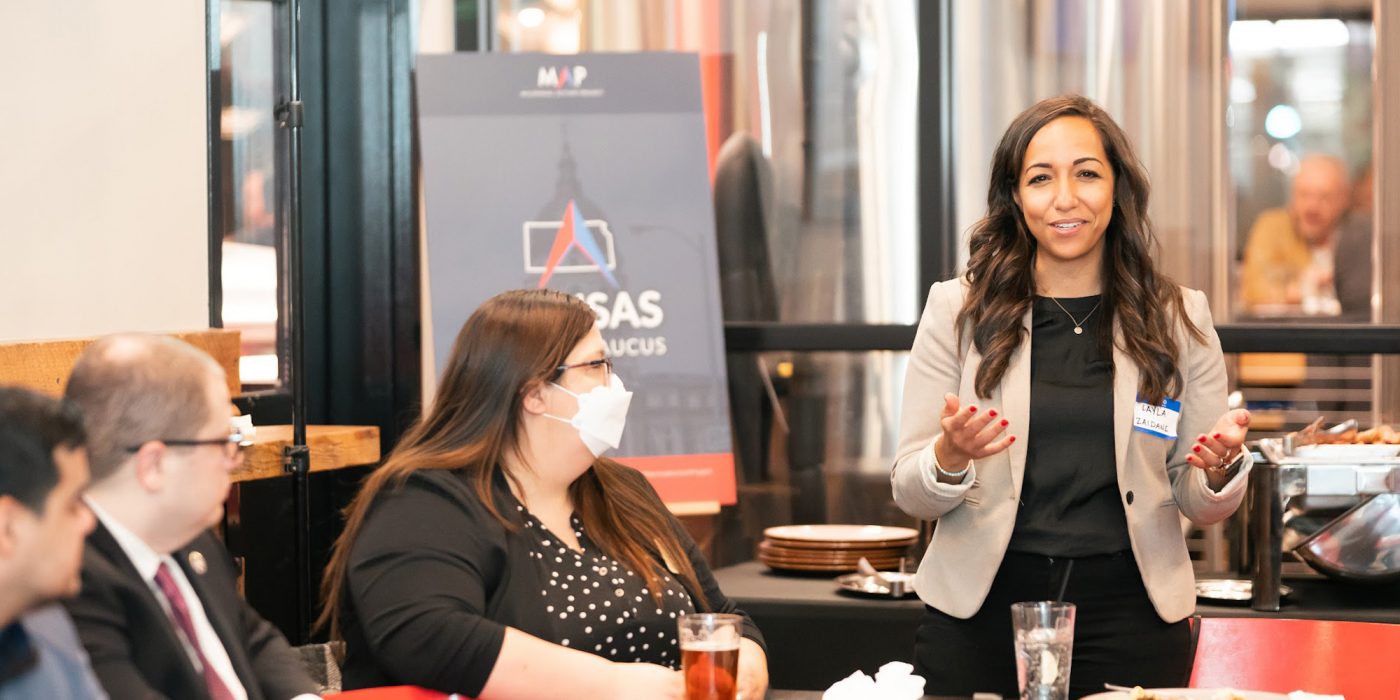 For 10 years, Ascend at the Aspen Institute has worked with families and partners to generate educational success and economic mobility. “Breaking the cycle of intergenerational poverty starts by changing the trajectory for our youngest children and families in early childhood,” says Anne Mosle, vice president of the Aspen Institute and founder and executive director of Ascend.

The Ascend Fellowship is an 18-month “personal and collective leadership journey.” Five 2022 Fellows provided their impressions of the experience so far, sharing their stories and their visions for change. (I also recently interviewed another 2022 Fellow, Jovanna Archuleta, assistant secretary for Native American Early Education & Care with the New Mexico Early Childhood & Care Department.)

Walking Side by Side to Build a Pro-Immigrant Electorate

“It truly was transformative,” says Roxana Norouzi of the Aspen Ascend Fellows convening that took place in August. As the leader of OneAmerica, an immigrant advocacy organization in Washington State, she credits Aspen’s commitment to equity and its extensive and vibrant network. “The other fellows and I took part in a thoughtful interrogation into leadership, with the added luxury of internal reflection.” Norouzi singled out a storytelling session led by Lori Severens, Ascend’s associate director for leadership and design, as particularly meaningful.

OneAmerica was founded by Pramila Jayapal (now a U.S. Representative) in the wake of 9/11 as immigrant and refugee communities were being targeted by anti-immigrant hate crimes, surveillance and government targeting, and the organization has now advocated for immigrant rights and immigration reform for two decades. After nine years with OneAmerica, Norouzi moved into the role of executive director in the middle of last year. Recognizing that little progress had been made on building pathways to citizenship for undocumented community members who came seeking a better life and who deserve the safety, security and belonging that legal status provides, she decided to embark on a new strategy.

“We’re building grassroots power, political power,” she says, “so we can see a different world in 10-20 years.”

“Our early learning campaign is a big part of that,” she continues. “How can we build the child care workforce and increase their earning power without displacing the current workforce?” For Norouzi and One America, the answer lies in organizing parents, workers and other organizations. This fieldwork requires patience, determination and, above all, a willingness to walk side by side with the people in her state most affected by policy failures. “Immigration status is their number one issue,” she reports. “The second most important issue is education. They want to build a better life.” These priorities hold true for the Latino immigrants living in the eastern part of the state as well as the African and Southeast Asian immigrants living in and around Seattle.

The daughter of Iranian immigrants, Narouzi grew up in suburban Seattle and remembers teachers treating her bilingual skills as a deficit to be overcome instead of a brain-building asset. Because her mother worked in child care, she’s always been conscious of how society undervalues the profession and the people who practice it.

Erin Arango-Escalante’s title at the Wisconsin Department of Children and Families is administrator of the Division of Early Care and Education, but she describes herself as a “dot connector.” “Supporting young learners,” she says, “requires a multigenerational approach and every sector.” The state’s Leadership Council on Early Years, which Arango-Escalante helped form, fosters collaboration at the cabinet level among such unlikely partners as Economic Development, Transportation, Revenue and Corrections. This work also involves engaging with and listening to parents and caregivers from urban, rural and Native American communities.

If there is a silver lining to the pandemic, Arango-Escalante says, it’s the way business has started paying more attention to early care and education. The infusion of federal dollars has supported new efforts in Wisconsin to leverage this spirit, including the Partner Up! program, which supports businesses to offer child care as a benefit, and the Dream Up! program, which supports the creation of new child care businesses and helps existing providers to expand. “We all need to work together,” she says, “just to keep the child care industry intact.”

Although the Wisconsin official grew up in the Dairy State, Arango-Escalante had formative career experience in New York City, working with neurodivergent children and their families. She recalls providing in-home care for twin boys in the Bronx, modeling tips and tricks for their single mom. Community members got used to seeing her visit. They saved her a parking spot, and they even washed her car while she was up in the apartment with the boys. “I’ll never forget that love and respect,” says Arango-Escalante, who remains in touch with the mother.

If complex families and family histories make her work more difficult, they also make it more personal. Until her teenage years, she didn’t know that she had Puerto Rican roots. (Her maiden name was Pedersen-McCann.) This discovery, her marriage to a Colombian immigrant and the birth of her two children, form part of what she calls “an identity journey” that energizes her commitment to equity.

The Ascend Fellowship is challenging Arango-Escalante to reflect on who she is as a leader. Gathering with the other fellows for the first time in Aspen, Colo., inspired her to chase big, bold ideas. “This is a moment,” she says, “to build high-quality, equitable, culturally responsive systems.”

“We don’t have time for this madness,” says Twylla Dillion, the executive director of HealthConnect One. She’s talking about the Black maternal health crisis that’s keeping her up at night. Black, American Indian and Alaska Native women are two to three times more likely to die from pregnancy-related causes than white women, according to the Centers for Disease Control and Prevention.

Personal experience has shaped her determination, as well as an MBA and Ph.D. in Health Services Research, Policy and Outcomes. When she had her first baby at 18, the experience of childbirth was traumatizing even though she had the support of her mother and her grandmother, a trained midwife.  “It was awful,” she says. “The process was broken.” When she had babies later in life, she was better informed and took steps to take more control of the situation.

Dillion notes that birth doulas have existed informally for a long time. Now that studies confirm they can improve health outcomes, she wants to ensure that legislators don’t add hurdles like licensure. “Some people want to make it fit into a ‘colonizer’ model,” she says. “They want to impose a clinical mentality, when what’s needed most is mutual trust and understanding.”

Dillion describes the gathering in Aspen as simultaneously grounding and propelling. “We saw ways we fit together,” she said. “It wasn’t always what any of us expected, but it was always mind-opening.”

The Fellowship is already motivating her to embrace a more liberated way of working nationwide and in her hometown of Rochester, New York, which has some of the worst infant outcomes in the nation. (Read more.) Her ambitious to-do list includes determining new ways to measure success, empowering doulas and birth workers to own their data, securing Medicaid coverage of doula care and somehow compelling the health care sector to stop identifying race as a risk factor. (As Dorothy Roberts writes in Fatal Invention, “Race is not a biological category that is politically charged. It is a political category that has been disguised as a biological one.”)

“That’s a battle I’ll still be fighting when I am an old woman,” Dillion says.

Learning a New Language.  “Liberatory,” Anyone?

There are many kinds of diversity. Chris Bennett, founder of Wonderschool, is the only for-profit professional in the current crop of Ascend Fellows. “I felt like an alien,” he jokes about the August convening.

Although he grew up in Miami, Bennett has spent his entire adult life in Silicon Valley and says that he and his startup embody the ethos of the technology sector. The nonprofit leaders, he says, are opening his mind to different ways of thinking, and he is even learning new vocabulary. Liberatory design, for example, as defined by the National Equity Project, is a process and practice to

Bennett states, “That gave me a new word to use when we talk about what we do, which is helping people help themselves and their communities.” The Wonderschool platform matches parents with child care providers around the country. The company also contracts with businesses interested in providing a valuable perk to their employees, and with cities, states and counties around the country.

“We’re seeing a lot of demand these days,” he says.

👉 Tune in to the Wonderschool podcast

Although Bennett is unashamed to claim profit as a motive, he underscores Wonderschool’s community benefits, pointing out that children with access to high-quality early education today have higher rates of college admission and lower rates of incarceration tomorrow.

“Adding value to the community,” he says, “is like planting a tree.”

Layla Zaidane, president and CEO of the Millennial Action Project (MAP), didn’t always think of young children as a focus of her organization. Designed to promote bipartisanship and to engage young policymakers in solutions to make government work, MAP addresses a range of issues, from climate to justice to workers’ rights. “When you think about it,” she reflects, “who does dysfunction harm most? It’s the youngest Americans.”

In Aspen, Ascend fellows took part in Socratic dialogues that compelled them to question motivations and rethink long-held assumptions. The introspective, sometimes uncomfortable, process mirrors the ordeal our country needs to go through in order to restore democracy. “Separating style from substance isn’t always quick or easy,” Zaidane notes, “but it’s something we need to do.”

Zaidane grew up in the New York suburbs in a family of Moroccan immigrants. She initially planned a career in international relations, and shifting to the domestic landscape with MAP is calling upon her to engage multiple layers of her identity—not just as an Arab American woman but as a self-described chameleon and as a Millennial, which like any generational handle contains a bundle of contradictions.

Are they tolerant and empathetic, or impatient and cynical? All of the above? “MAP aims to make our institutions function better,” she says, and it starts with hearing each other out. “We’re not solving problems if we’re not listening,” she asserts.

One of Zaidane’s chief goals in the coming year is launching an innovation lab—a collaborative and inclusive space within MAP to equip young people with the tools to be successful at the state level, where some of the nastiest partisanship has taken root. “Becoming a better leader is one thing,” she says. “Helping build up other leaders is where the multiplier effect comes in.”

The Ascend Fellowship is helping her realize this vision. “Anne Mosle asks us, ‘What’s holding you back from making that quantum leap?’”

“We’re all taking a step back from our day-to-day challenges and thinking more about the long term.”